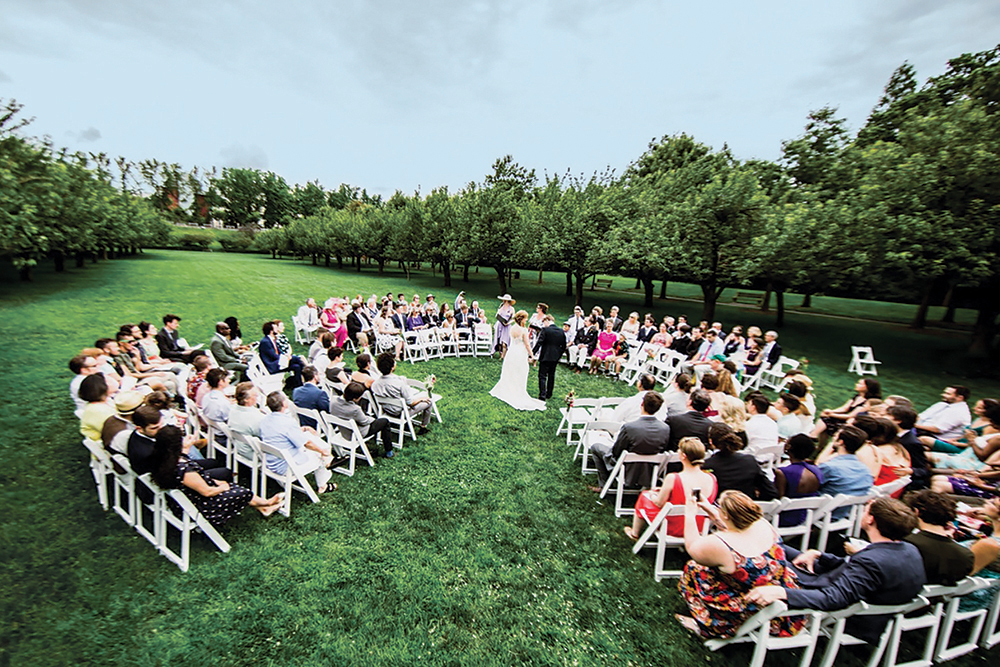 Make it Personal & Surprising … “Incorporate signature cocktails to offer fun ‘his and her’ drinks.”

Personalize Your Ceremony … “Customize your ceremony by changing the way chairs are laid out. Instead of the traditional four to five rows of chairs in a square shape, one recent bride and groom presented them in a circle with all their guests in a circle around them.”

Celebrate Your Backgrounds … “Showcase your culture by selecting food stations that speak to your heritage.”

Guided By Your Personalities

“It’s very important to know what the venue is going to provide for your wedding and what you might have to get on your own,” says Victoria Laughton, catering sales manager at Patina Events at Brooklyn Botanic Garden. “One thing that’s nice is that we provide a lot of things for our couples.

“For instance, most couples are asking about catering, chairs, décor, and the room setup. We help with everything, from linens to personalizing menus. If we don’t have something in-house, we have a list of preferred vendors that we can recommend. Some venues have required vendors, like certain photographers or florists. At Brooklyn Botanic Garden, we don’t have a required vendors list.

“Another important question is, ‘When does the party end?’ It’s important to know the venue’s time restrictions and how late you can play the music.” 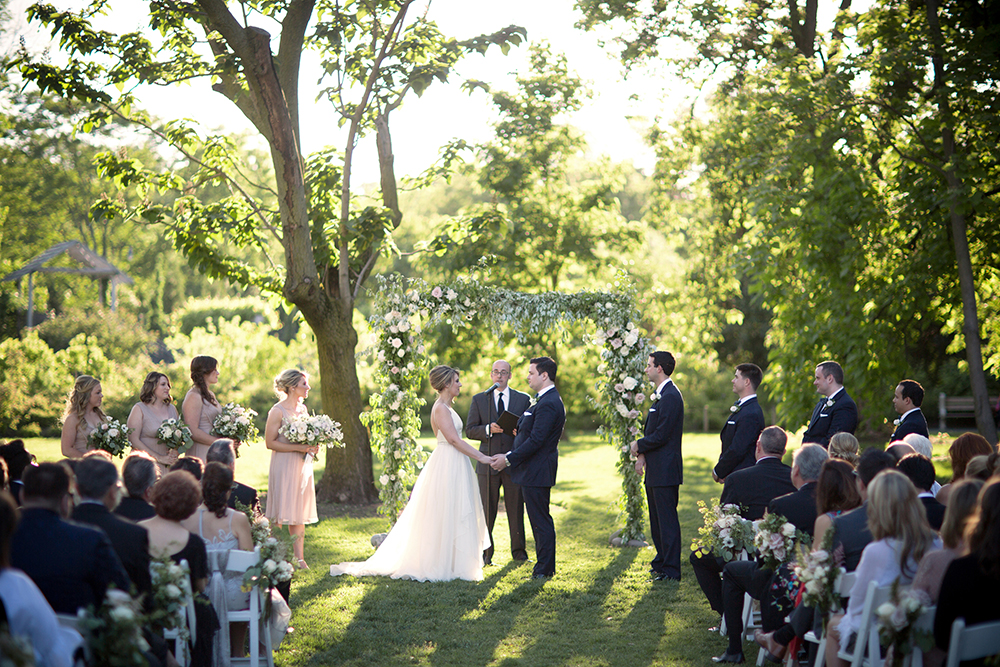 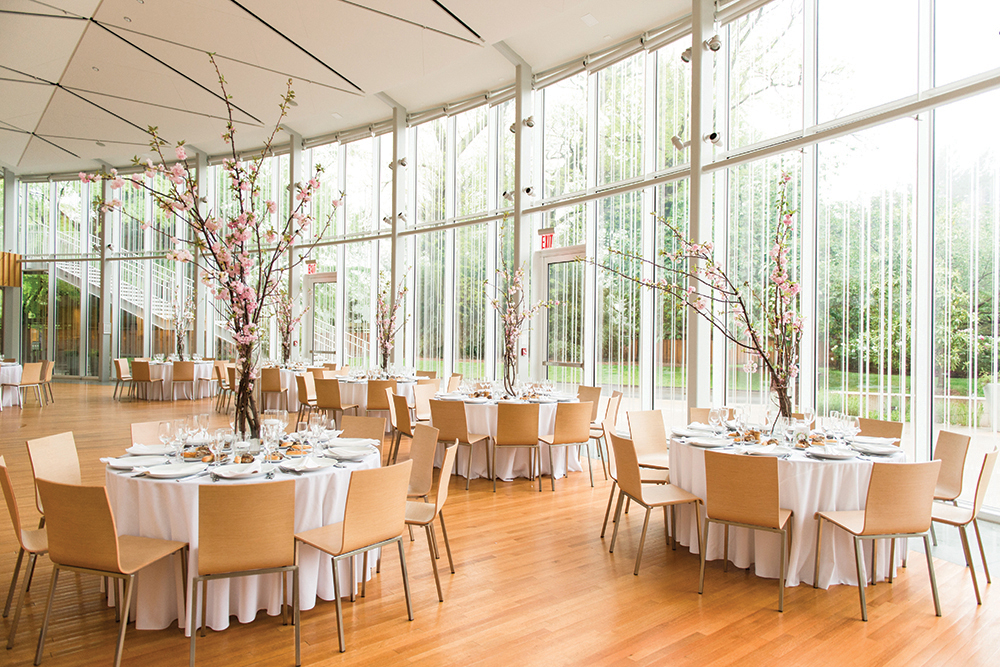 There are unlimited ways to design your décor and menus to present you as a couple. “One way to showcase your culture is to select food stations that speak to your heritage. This past season, a bride wanted to surprise her Irish groom by customizing one of the action stations we supply for cocktail hour with an updated Irish-themed station, which included favorites like double stuffed potatoes and corned beef croquettes. We also customized a fun play on an Irish drink, using housemade Bailey’s, whisky flavored ice cream, and Guinness in miniature pints to pair with the food. The Irish touches were a lot of fun. 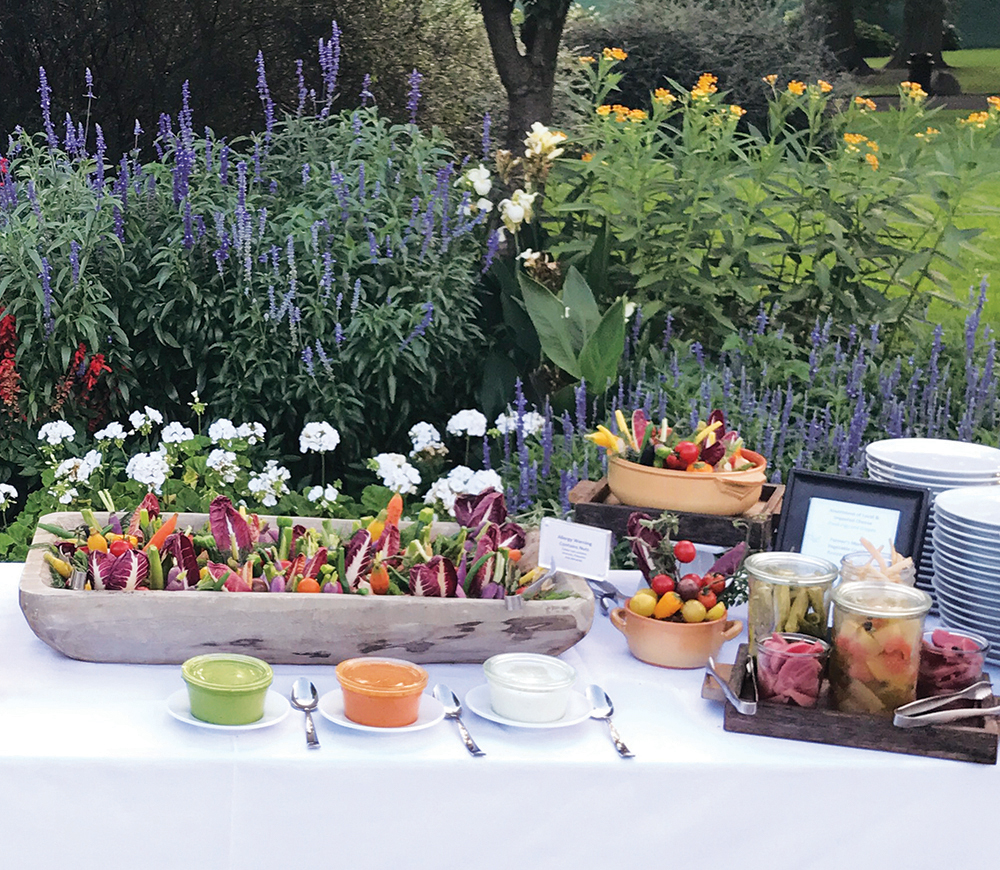 “Another special item we like to incorporate are signature cocktails. It’s a fun way to make ‘his and her’ drinks. One bride recently created a ginger bramble, a vodka drink with rosemary and a splash of tonic. A lot of it is about getting to know the couple, and creating their menu to fit their preferences and needs.”

They also cater many vegan and vegetarian menus. “This past season, one of our couples did a stationary ‘Edible Garden’ action station. We created ‘Edible Soil’ with toasted rye bread and nuts and then had the vegetables sticking out! It was a beautiful, rustic addition to the wedding. All the colors of the vegetables tied in beautifully with the backdrop of the botanic garden!”

“This past fall, we had a wedding with two grooms who designed all the centerpieces themselves. They used flowers and vegetables like cabbages and beets. They also created rustic vines of flowers that were five feet high and tangled around PVC pipes. They even designed their own candlestick holders.”

They recently hosted a tasting with a new bridal couple. “The bride had a lot of ideas prior to the tasting. After learning what’s important to her and her fiancé as a couple, I was able to offer them the best advice to achieve the wedding they wanted. Her main priority is to be on the dance floor the whole evening!”

Victoria notes that she and her associates are with their wedding couples for six to 12 months. “In the process, we are building a relationship with them and getting an understanding of what they want, so we can make sure everything goes the way that it should.”

Victoria and her team have a lot of fun creating special  cocktail hour stations tailored to their couples. “A few recent stations included a guacamole station, a Brussel sprout taco station. This season, brides are going crazy over ‘Boozy Popsicles,’ which are alcoholic! After sitting in the hot sun during the ceremony, people really enjoy a refreshment — with a kick!”

One way they customize the ceremonies is by changing the way chairs are laid out. “Instead of the traditional four to five rows of chairs in a square shape, one recent bride presented them in a circle. The bride wanted to be outside on the grass, barefoot. She said it made her feel free.”

As a way to incorporate her free spirit into the ceremony, this couple had all their guests in a circle around them. Rather than a traditional aisle or an altar, the bride and her groom stood in the middle of the circle and could face any way they wanted throughout the ceremony. “Another bride wanted to incorporate an organic path to her altar, so we created a serpentine aisle in the garden.

“We’ve done all kinds of fun décor for different cultures. For Jewish weddings, we’ve had every kind of chuppah, from traditional to ones with elaborate flowers on all four sides. Sometimes we’ve done mixed Jewish and Catholic weddings, where we’ve had both a rabbi and a pastor or another officiant officiating the ceremony together and we coordinate all those details.”

Our preferred vendors have created flower arches for couples to be married under and they’ve spread out rose petals in the garden grass. “In the garden, cherry blossoms are out in April and the Lily Pool is in full bloom during the summer months.

“The personalities of each couple come out during the wedding planning process and then show through their ceremony, décor, and food. It’s really a pleasure getting to know a couple and what is important to them.” 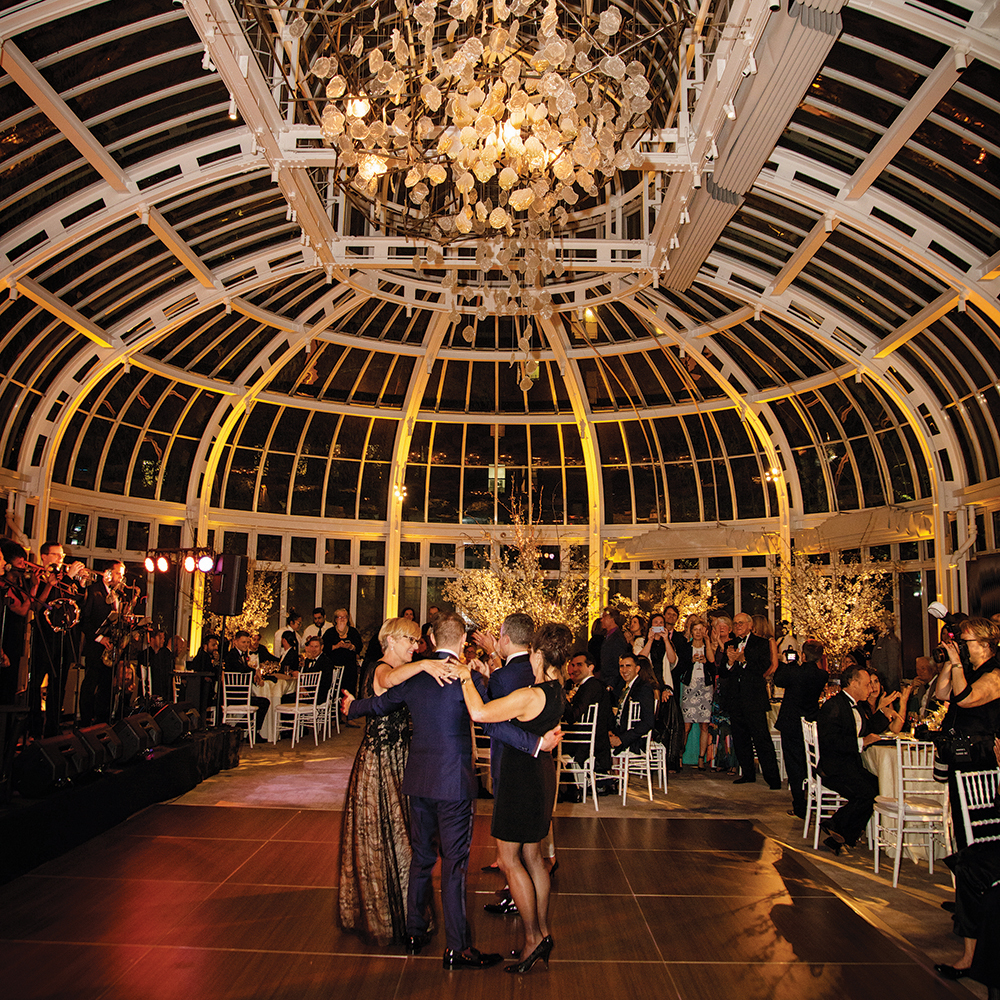 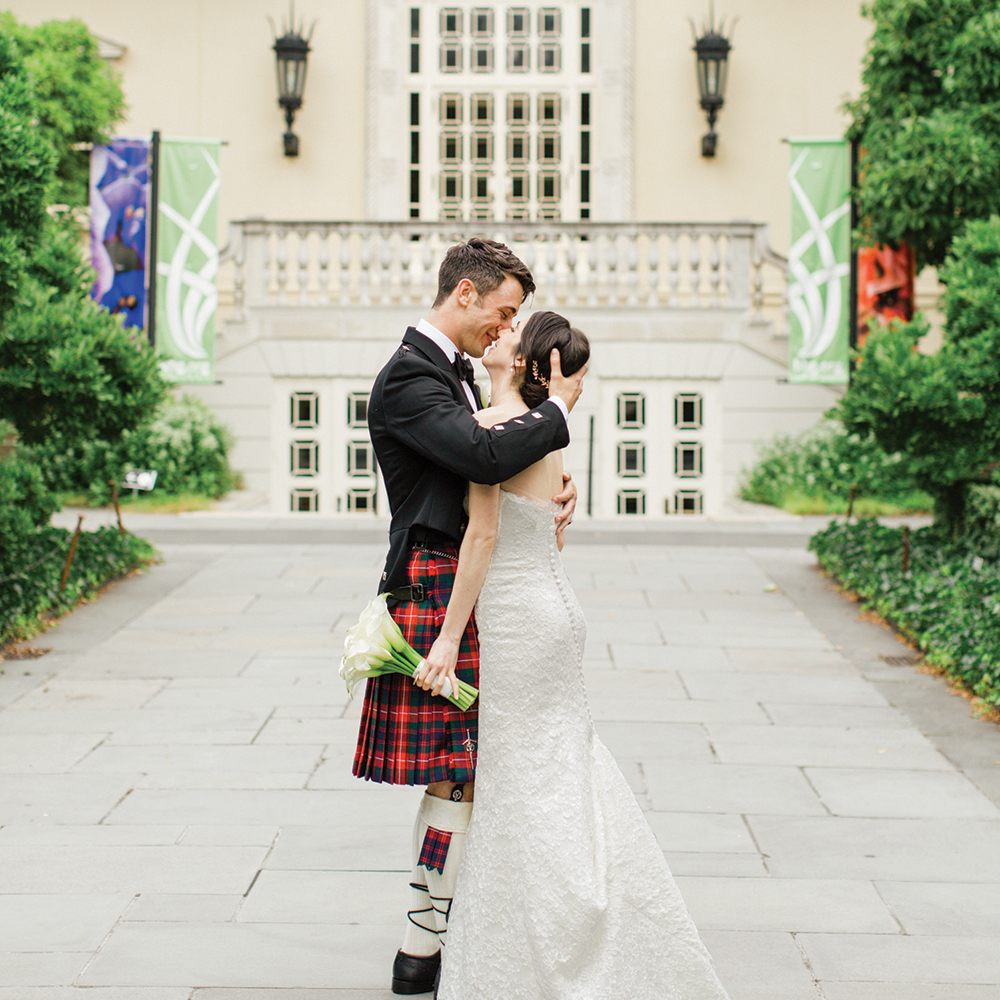 A lot of brides come to the Brooklyn Botanic Garden to be outside in nature in the garden. “Here they get to choose between the 100 year-old Palm House, that was newly renovated by Rockwell Group, or the more intimate Lillian and Amy Goldman Atrium. Each space is accompanied by an outdoor ceremony location and terrace for cocktail hour. If it’s too cold outside or if it is raining, brides will end up in our inside spaces for their ceremony and cocktail hour, as tenting is not permitted in the garden.

“But we still create a garden feeling in our indoor spaces too, with many tropical plants and bonsai trees. The Atrium and indoor dining room are generally used for ceremonies and the Conservatory is often used for cocktail hour. Both are not only beautiful, but they’re completely open spaces, which gives the couple a blank canvas to design however they’d like.”

The Atrium is three years old and it has a glass living roof and can hold up to 125 people. The conservatories are mostly used for family photos and cocktail hour. “We have also done standing ceremonies in the conservatory, which can hold 150 people. “The biggest space at the garden is the Palm House in front of the Lily Pool Terrace, which can seat up to 250 people with a dance floor.

They also just opened a new ceremony location, the Shelby White and Leon Levy Water Garden. “Brides looking for a very green ceremony site love this location. Brooklyn Botanic Garden is extending the water garden by adding streams and waterways that will allow for storm water to be collected and pumped back into the garden, making it fully sustainable.”
A Century of History ... The Brooklyn Botanic Garden opened on May 13, 1911. “The Palm House itself is 101 years old! We just did a huge event last year with the city to celebrate the 100th year of The Palm House and its beautiful antique architecture.”

They renovated The Palm House space recently, updating the interior design and adding a new custom chandelier. “The Palm House and exhibits in the garden are always being updated.”
Victoria studied hospitality management at Syracuse University and has been in the hospitality industry for 10 years. “I’ve always had a passion for food and beverage,” she tells us. “Three years ago, I never would have thought I’d be planning weddings. But now that I’m working with brides, I’ve realized this is my dream job!

“One of my favorite things about the hospitality industry is catering to people on a daily basis and getting to see the end result of your work. Those moments when you see the event come to life and you get a big hug at the end of the night, thanking you and your team for all your hard work, is simply wonderful! I love taking care of people and making sure their experience with us meets all their expectations.”