You are at:Home»Insights»Venues: Budgets, Menus, & More»Surf Club | Magic on the Water 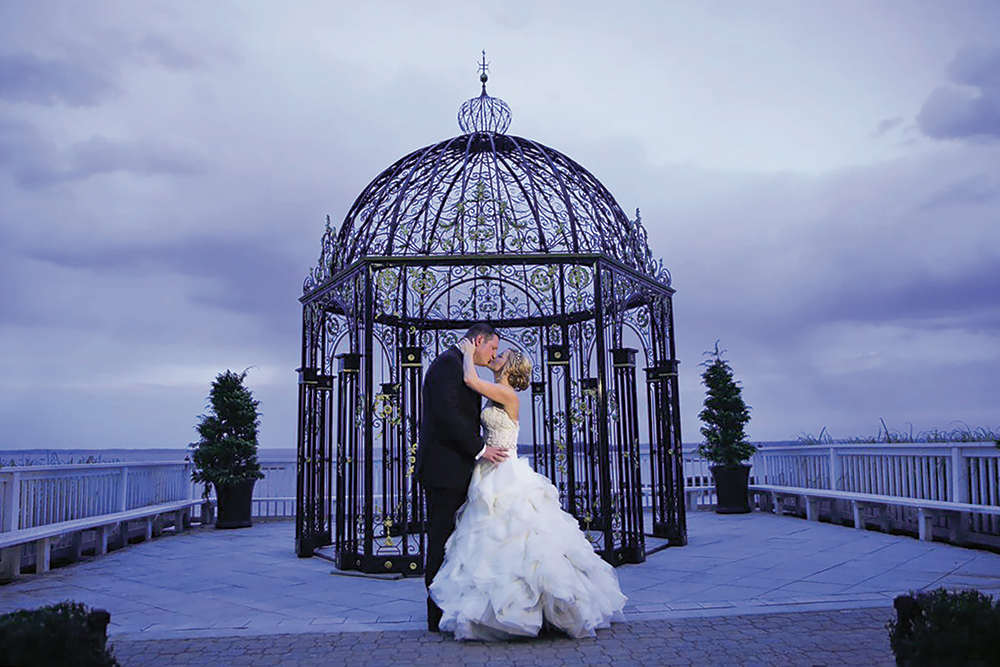 Assess the Staff: "With any venue you are considering, by exploring items such as your menu, you will learn a lot about how they will work with you." Are they open to your ideas, to your budget parameters, to the special needs of your guests?

Consider Your Priorities: "If you are choosing a venue primarily for its beautiful garden wedding site, will you be satisfied with the back up site if it rains?"

“When you visit potential wedding venues,” says Rick DiLeo, banquet manager at Surf Club on the Sound, “you have to be comfortable with the management team. I always tell our wedding couples, ‘It’s not only the place, but the people you will be dealing with.’ The manager, the owner, the sales team  – you have to trust everybody.”

To help create this trust for brides at the Surf Club, Rick tells us he and the staff are always available. “I’m not only your banquet manager; I also act like your wedding planner. I’ll help with the vendors and with how your celebration will be run from start to finish, which is what you should expect from your banquet manager at any venue you might choose.”

Some wedding planners may try to dictate how to handle various aspects of the wedding, but Rick notes that they must do so with an awareness that those at the venue know what works best there. “Managers at a particular location will be aware of their venue’s special constraints and unique opportunities, and the planner seldom knows those particulars.” So if you’re using a wedding planner, make sure they are also comfortable working with your venue. 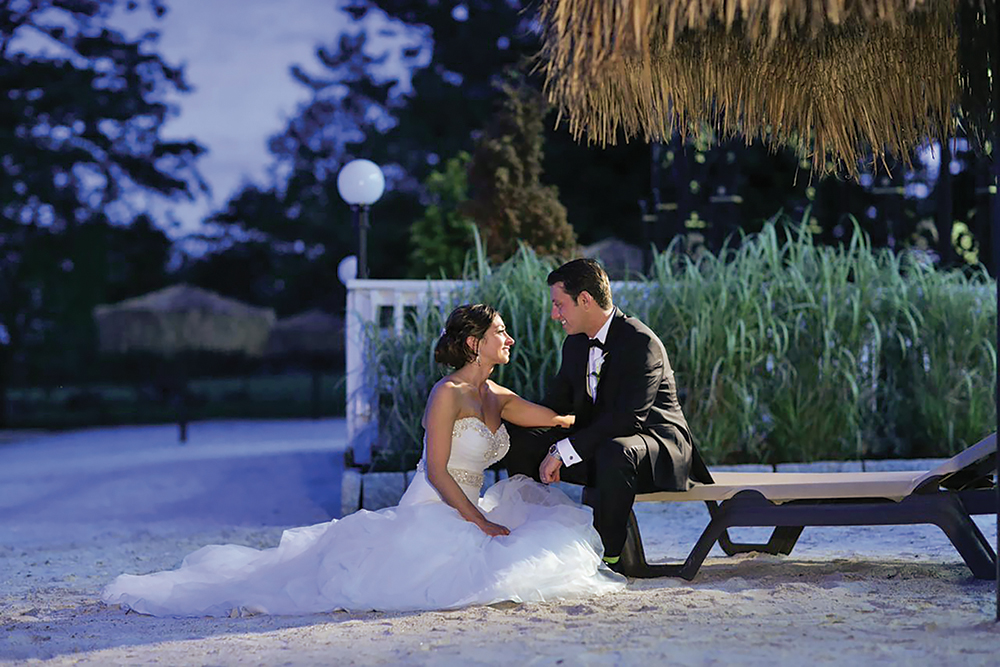 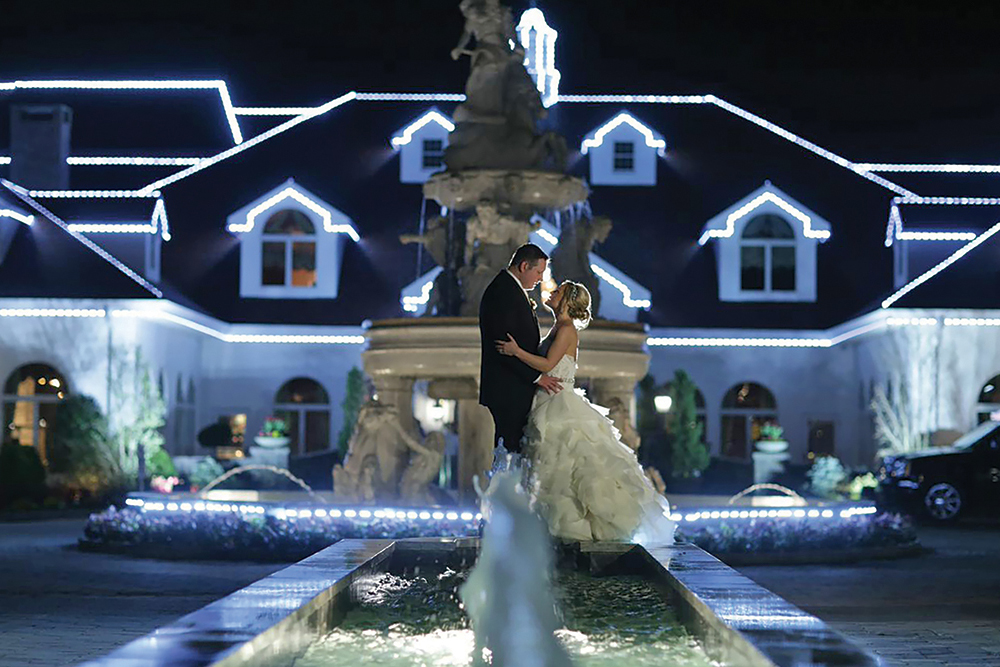 “We meet with the wedding couple and talk about the building,” says Rick, “as well as the cocktail hour, the reception, and where to do the ceremony. Do you want your ceremony at our beach, for example, or in our private chapel? Whether you have good or bad weather, you’re all set.”

As you would want to do with any venue you are considering, by exploring items such as your menu you will learn a lot about how they will work with you. “When I speak to each couple, we go over the menus. I try to answer every question they might have. If they need a rehearsal, they can always do that here. They can come the week of the wedding and look at the place.They can do a private food tasting several months before.

"We also have our own bakery where they can come in, meet the baker, and pick out the cake they want. There are a lot of menu options available, as well as cakes, decorations, and entertainment. Any time you have questions regarding vendors, I say, ‘Just call me.’ ”

Some of your guests may have gluten-free diets and your venue, like the Surf Club, should always have gluten-free dishes on hand, even if you haven’t told them beforehand. “But if you want something specific for vegans or vegetarians, we always offer those options. Our chef is also great at dealing with allergies. We encourage our couples to talk to the chef if they or their guests have any dietary restrictions. Our chef, Anthony Delfino, is always available to speak with you.” 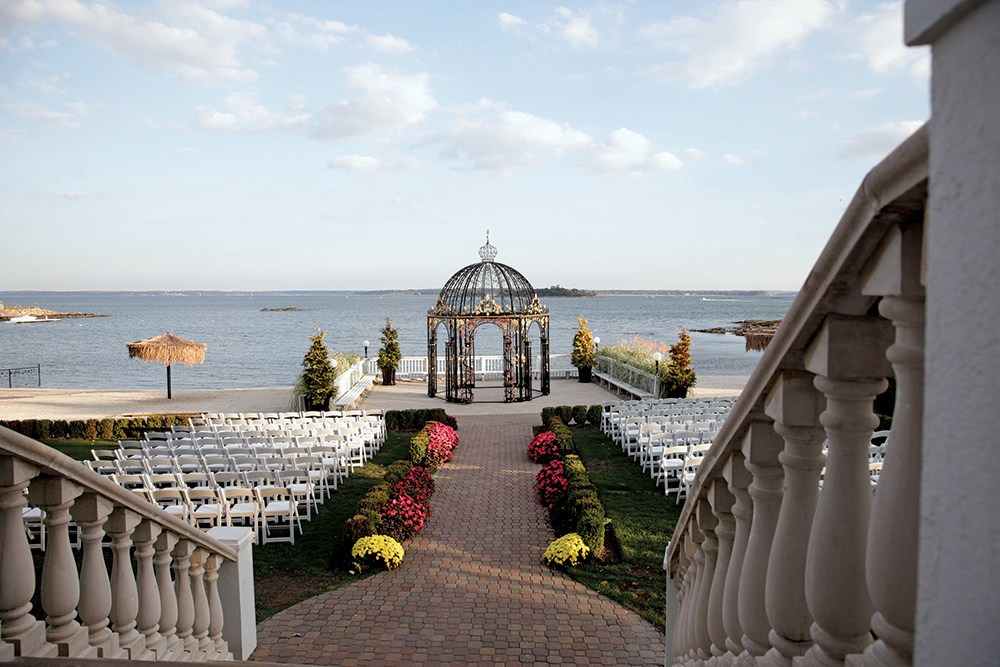 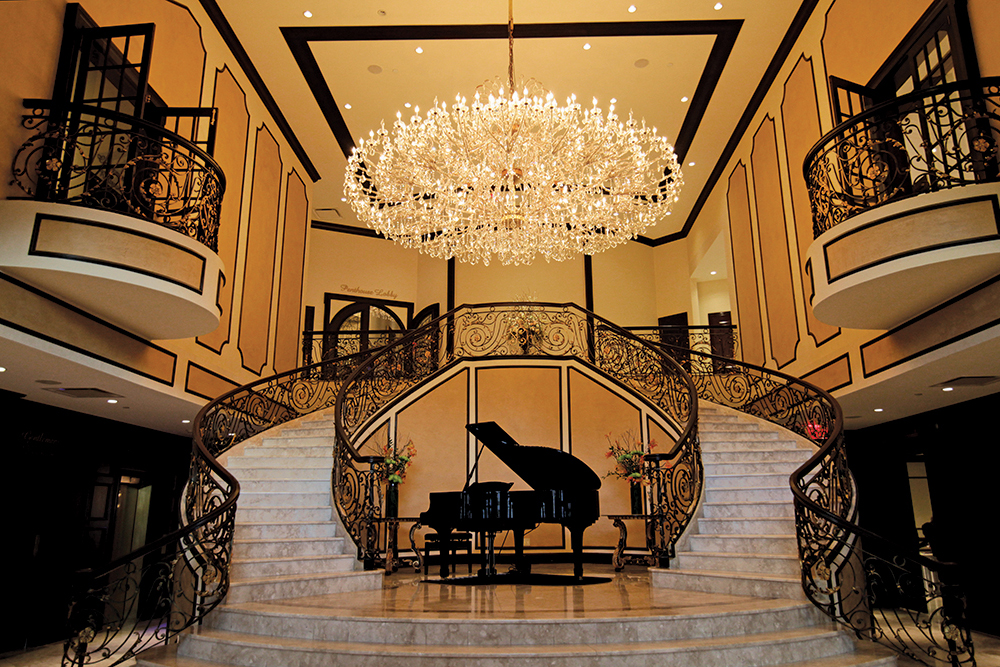 At one recent wedding, the couple was worried about the very severe weather reports for their wedding the following week. “I told them, ‘We’ll be here no matter what. But if you want to move the wedding to a different date, we’ll help you find a date that suits everyone’s needs.’ ”

Another couple had a problem with their limousine, “So I helped them find a new limo company that came right away. Our job is to help straighten out problems. We have lots of vendors, so last-minute changes are always possible. Sometimes they get flowers they don’t like, so we’ll call someone to come and fix it up. Even if the company we call did not do the flowers, our suppliers are always ready to help.

"Almost anything can be fixed, even at the last minute. With the wedding cake, for example, if there are any concerns, it’s usually about little details, like the color or the flowers, and the chef will fix it.”

Another recent wedding couple wanted a lot of entertainment. “I called the company we work with, Shazam. They helped us create a cocktail hour with acrobatic artists hanging from silk and other performers on stilts, pouring champagne, or walking among the guests while doing magic tricks.”

The Surf Club hosts their after-parties in the cocktail hour room. “We’ve created different after-hours environments where we set up a lounge with couches and high tops and special lighting, plus, for example, a scotch bar, which also helps to create a different atmosphere for the end of the evening.”

There are many amenities you may want at your venue, such as LED lighting. “Here at the Surf Club, we have different colors and styles of LED lights around the room. We also have special linens and candles for our sweetheart table to make sure they are uniquely decorated, and we also put out different candles for the cocktail hours. If you want different tablecloths, we can also provide them, or you can use another vendor.

“For your décor at the Surf Club, our space is ivory, which goes with almost any color palette you may choose.” The compatibility of a venue’s ambiance with your own color palette is something you will want to consider for any location you might visit. 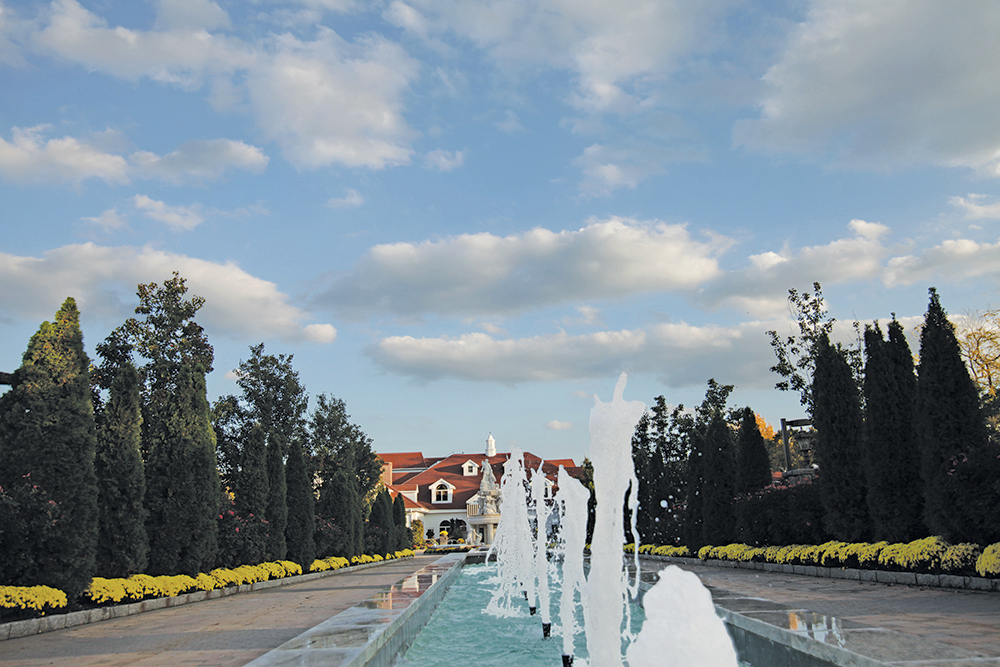 Rick tells us they work with everyone’s budget as much as possible. “We can tailor the menu to your budget. For dessert, for example, we can incorporate an individual dessert followed by the wedding cake.” The Surf Club also offers different payment terms. “We typically ask for 20 percent down, but we can reduce that and then create a payment schedule from then until the week of the wedding.

“Initially, our couples will guarantee a certain number of guests, but we don’t ask for a definite minimum guarantee until the week of the wedding. That way, we can make sure you’re only paying for the actual number of guests who will be attending. 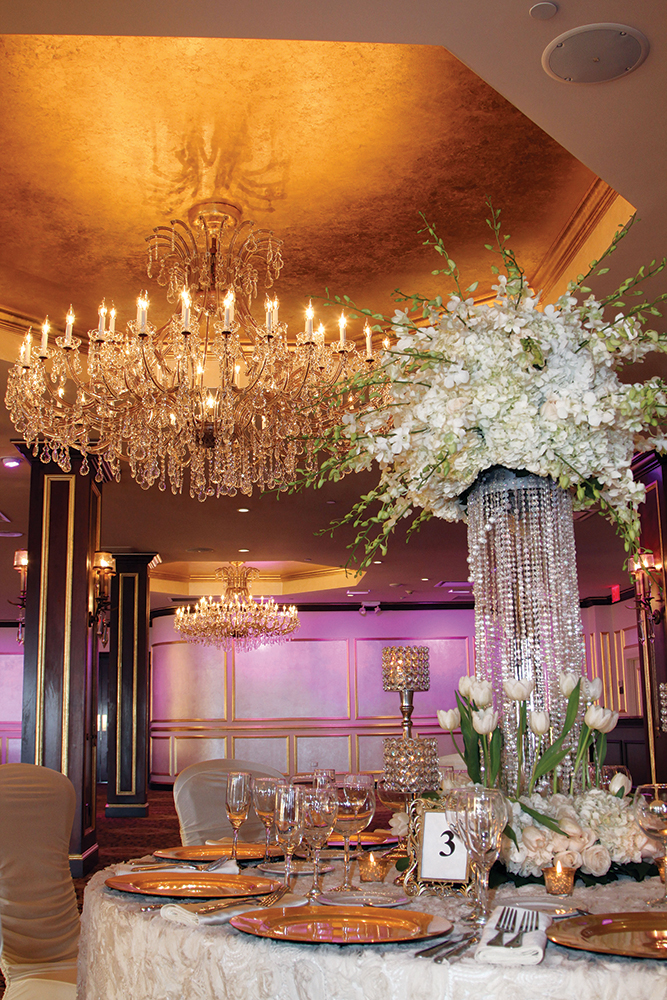 “Some couples don’t want a cocktail hour followed by a sit-down dinner. Instead, they may want a cocktail hour-style reception with various live stations, or a family-style dinner with different platters. Both these approaches can be more budget-friendly, and both work especially well for larger weddings.”

They’ve hosted a variety of weddings; Arabic, Japanese, Chinese, African-American, and more. “We accommodate everyone. Chinese weddings, for example, include both a regular ceremony and then a tea ceremony for the families.

"At the Surf Club, we have separate areas for those events. We also have kosher dishes and we have a tisch room for our Jewish weddings as well as separate rooms for male and female guests, which are available for certain religious ceremonies. For example, we’ve had orthodox religious weddings where we’ve used separate rooms for the women and the men. The women are then served by only women servers, while the men are served only by male servers.”

Current management took over the Surf Club about six years ago and have completed numerous renovations. “We upgraded the fountain, the lighting around the building, and even fixed up the beach area with white sand. We bought all new tablecloths, silverware, and glasses. We added a chapel because these days more people get married at the venue than the church but they still want their religion involved. We’re also right on Long Island Sound, closer to the water than any other venue.”

Rick got into the business at the age of 17 as a waiter. “Then I became captain, then maître d’, then the manager. I always take the calls, texts, and emails from our wedding couples, always solving any problems together with them. If we can’t do something, I won’t promise it, and that’s why we can deliver on everything we promise on the biggest day of their lives.

“The most exciting part of throwing a wedding is seeing the bride come into the ceremony. I go to the kitchen, I’m on the floor, I go to the bride and groom. I take a lot of pride in making sure they feel at home.”