Corinne: Megan and I met when a good friend of hers, Brett, moved into an apartment in New York City with my good friend, Lee. Lee and Megan became close, so when I visited New York from Boston, Lee invited Megan to meet me. When she walked in, I turned to Lee and said, “I know this sounds crazy, but I’m going to marry her one day.” A year later I was accepted to Columbia University’s School of Social Work and was moving to NY. Lee set me and Megan up and we went on a date to Victor’s in Provincetown, MA.

Megan: A few months later, I met Corinne’s wonderful family in Ocean City. That’s when Corinne asked if we should have “the talk,” to make it official. Sitting on a lifeguard stand on the beach, I told her I didn’t need a talk, I was already “all in!” We share the same values, have the same hopes for our future, and fit really well into each other’s lives. A year after she moved to New York, we moved to Brooklyn together, and we’ve made an amazing life here ever since. I am a marketing director at American Express and Corinne is a Policy analyst in healthcare research.

Corinne: One Saturday, I went to visit my parents. Realizing she’d have our apartment to herself, Megan decided, “Why not propose today?” She spent the day creating cards for each year of our relationship that held photos of significant “us” moments.

Megan: I turned off the lights, lit candles, and chilled a bottle of Veuve Cliquot. When Corinne walked in, “I Belong to You” by Brandi Carlile was playing. After she read each card, I said, “All these moments led us here,” and proposed. 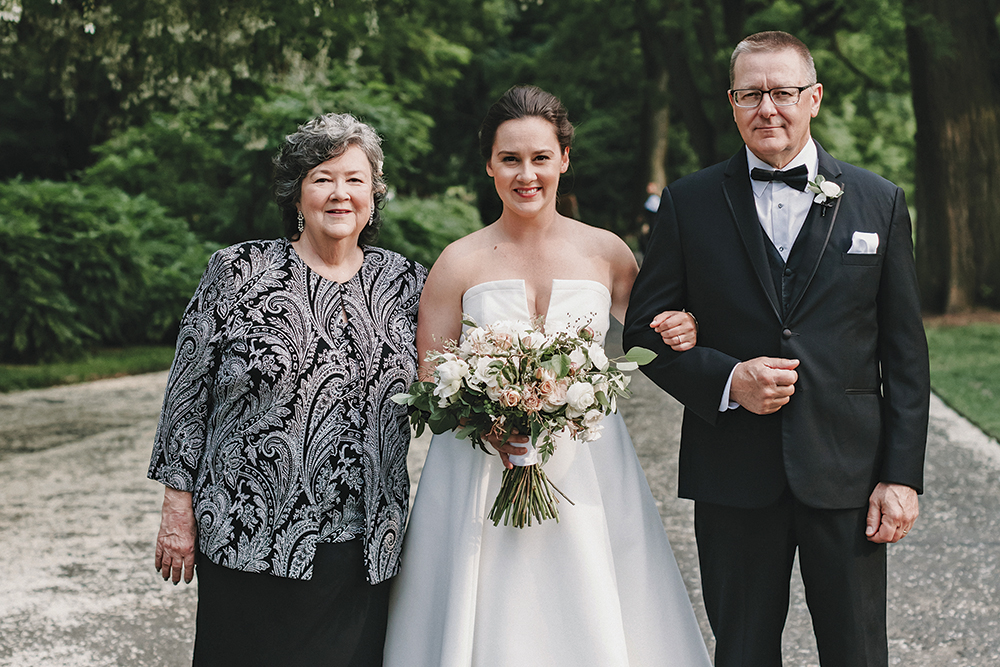 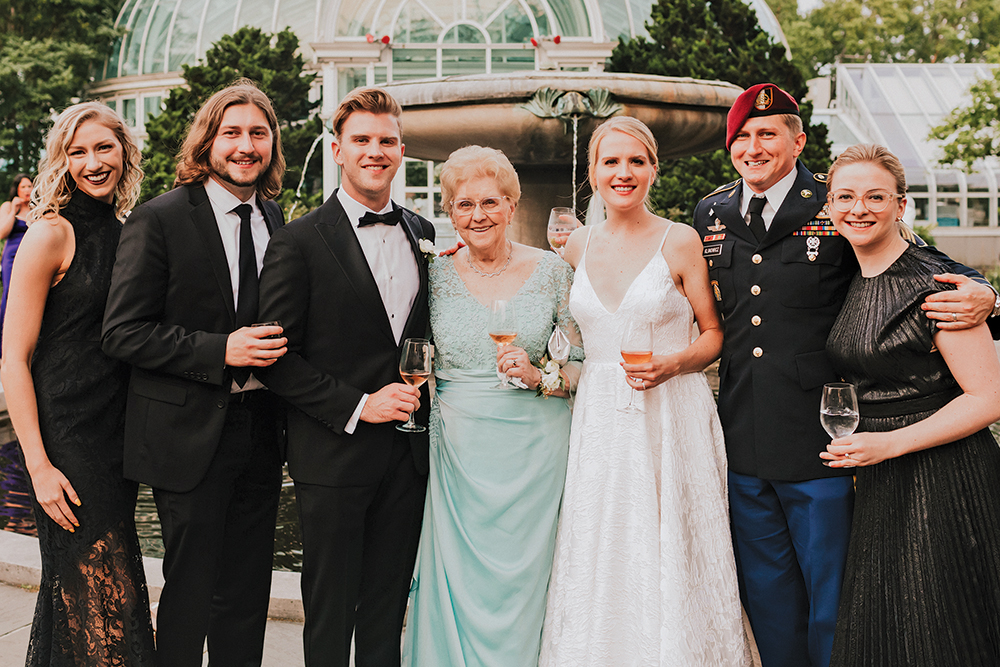 Corinne: The first time we visited Patina Events at the Brooklyn Botanic Garden, I was blown away by its beauty. We wondered how such a natural, perfect treasure could exist so close to our home; a perfect space that could give us exactly the aesthetic we were looking for. After reading overwhelmingly positive reviews and speaking to friends who had attended events there, we knew this was the best of all worlds.


Megan: Every step of the way, the Patina Events staff was phenomenal. Our tasting made a lasting impression on us. We would go there for dinner every night if we could! It was a five-star dining experience, complete with wine pairings. The chef was personable and came out to greet us. We noticed the majority of kitchen staff, and indeed the staff at large, were mostly women and their obvious organization and experience felt empowering. Victoria Winter, Patina’s catering sales manager, was wonderful to work with. I was very hands-on and she was always more than receptive to our ideas. 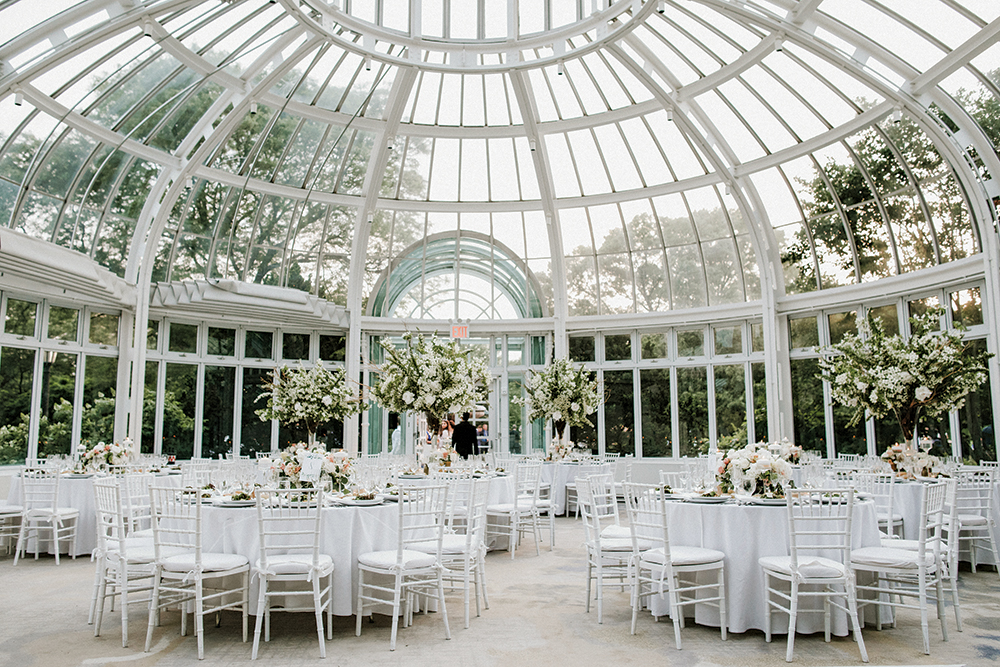 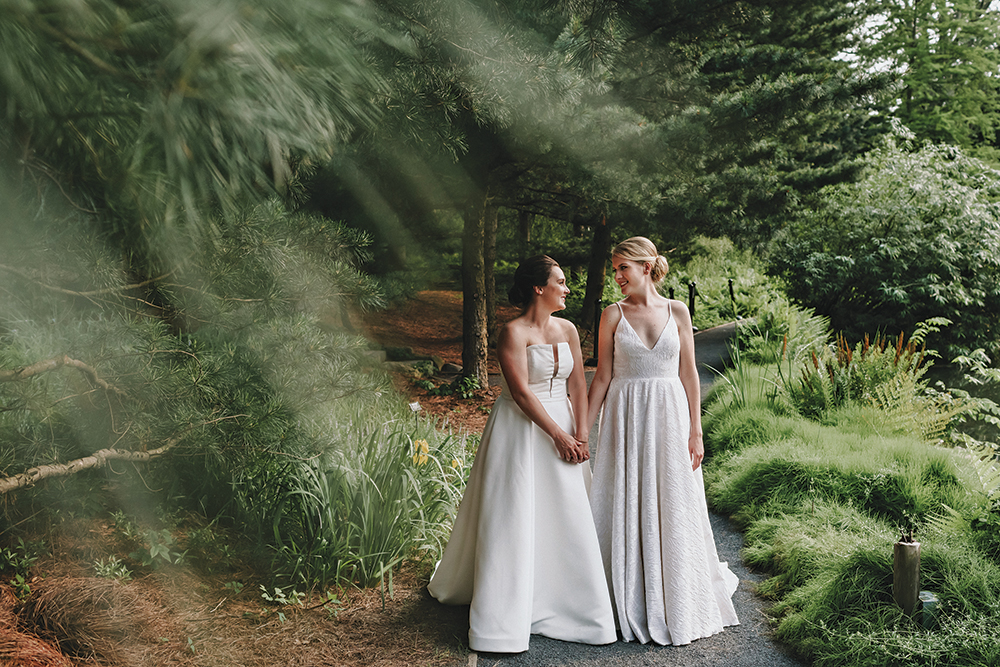 Corinne: A Sunday brunch with a laptop yielded a bespoke, powerful ceremony that was patently us. We wrote realistic vows that were personal and relevant, acknowledging the highs and lows in marriage and promising to support each other through every phase of life. Our ceremony opened with one of Megan’s bridesmaids reading a portion of Justice Kennedy’s majority opinion in the decision to legalize gay marriage. Each of our mothers read unique cultural marriage blessings followed by our vows. We responded in unison with “We do.” Lee, responsible for bringing us together, officiated, and was an amazing speaker.

Megan: After the ceremony, Patina Events put together a platter with two of every hors d’oeuvre in the bridal suite for us to enjoy before going out to greet everyone. Knowing the copious amount of delicious food we selected, we made sure we had time to eat and say hello to everyone. In view of the reflecting pools and fountain, it was a lovely setting for our guests to gather and mingle.

Corinne: The extraordinary glass nature of the Palm House let in the wonderful sunset as the reception began. Our tall arrangements accentuated the tall ceilings and their pastel pinks and greens popped against the white room. Our florist, Rebecca Shepherd, is beyond compare.

Megan: Our reception began with parent’s speeches. I danced with my mom to “In My Life” by the Beatles and Corinne with her dad to “Seasons of Love” from the musical “Rent.” For dinner we offered chicken, filet, and halibut. Everything was as quality for 200 plates as it had been for our tasting. The band had people on the dance floor all night, we received endless compliments, and people still ask us where we found them. The last song of the night was “New York, New York” by Frank Sinatra. Everyone formed a circle with their arms around each other and sang along. It was a truly magical end to the evening.

Corinne & Megan: Thank you to our parents who were intimately involved in planning, were always there for us, and without whom we couldn’t have pulled the weekend off. We give all our vendors a rave review, and thank the breathtaking Brooklyn Botanic Garden for everything!