"In this magical time of infinite possibilities, you have created true love."

With those 12 words, we open each issue of Manhattan Bride, celebrating your positive outlook — and your commitment to love and success. Offering new ideas plus time-tested solutions for your wedding, we enlist knowledgeable wedding vendors as "members of the team" ... to help us give you the information you need, plus the fun Honeymoon Contest here on our website.

But none of this would be possible without the generous help of our real wedding couples, models, suppliers, friends, and bridal professionals, plus our dedicated staff.

In Brief ... A graduate of MIT and Harvard Business School and a Golden Gloves boxing champion ... Rick wrote software for one of NASA's Apollo moonshots ... consulted for Hollywood film studios and companies on both coasts ... launched the magazine for the legendary nightspot Studio 54 ... founded and ran for almost 20 years a foundation raising funds for breast cancer research and New York City’s homeless children ... hosted almost 40 celebrity-studded charity events at such locations as the Plaza Hotel ... and won over 50 national and international awards for his photography, writing, and design, including for his acclaimed fashion and ecology-themed shootings from Tahiti to the Amazon Jungle, Paris, Morocco, and other exotic locations. Details are below.

Decades of Social & Economic Change. Having launched his independent publishing company in 1979, Rick has guided it through six recessions, the Digital Revolution, the Internet Explosion, the onslaught of Social Media, and countless cultural waves from Disco to Reality TV to Fake News to Social Distancing. Decades of such dramatic change necessitated adopting new marketing, finance, and business strategies, while introducing innovative design, photography, editorial features, and services offered by his award-winning magazines and this award-winning, ever-expanding website.

Rick’s photos have appeared in his own publications and in others worldwide, from the cover of a #1 New York Times best-selling book and other best-sellers … to publications such as Time, Newsweek, Elle, Dance, Self, The New York Times, The Wall Street Journal, and various European and Asian publications. His photos also have been exhibited in museums and at the UN, where he was honored with the prestigious Award of Excellence from the United Nations Society of Writers for his environmental articles and photography.

Boston. Cambridge. Annapolis. Rick graduated near the top of his class from both MIT, where he was a member of the engineering honor society Tau Beta Pi, and from Harvard Business School, where he graduated with Distinction and was awarded a Baker Scholarship. He also ranked near the top of his class at the US Naval Academy and served in an Intelligence unit in the Naval Reserves, where he had a Top Secret security clearance.

Rocket Science. In The Ring. Studio 54. Hollywood. Appalachia. While at MIT, he was a Golden Gloves boxer and became the New England middleweight champion. A computer programmer at the MIT Instrumentation Lab working under a NASA contract, he wrote software simulating the guidance system for one of the legendary Apollo lunar missions. As a business consultant, he worked for Samuel Goldwyn Studios in Hollywood, the Bureau of Mines in the coal mines of Appalachia, and for Bankers Trust in New York. He also was the founding Editor-Publisher and principal photographer of Studio 54, the magazine he created for the legendary night spot.

A Charity Foundation. Rick launched a 501(c)(3) charitable foundation in 1986, which he ran for almost 20 years. He held some 40 charity benefits, with regular annual fund raisers for Homeless Children and Breast Cancer Research. In this role, he hosted black-tie dinner-dances, fashion shows, raffles, photo exhibits, and awards ceremonies at major venues, including The Plaza Hotel, where he welcomed as many as 800 guests in two adjacent ballrooms.

His award ceremonies honored Hall of Fame athletes; Oscar, Tony, and Emmy Award Winners; Civil Rights leaders; top Medical Researchers, Doctors, and Scientists; Cultural Icons; world-renowned figures in the Arts; Billionaire Businessmen and Philanthropists; a Nobel Peace Prize Winner; and more. Well-attended by such individuals, celebrities, models, and other leaders in the arts, sports, business, and society, these charity events were covered by the NYC papers, national magazines, and ABC-TV.

Rick also worked on a pro bono basis in economically-stressed areas in South Boston and in East Los Angeles, where he helped community development groups and various labor-intensive companies. A “Principal for a Day” in the New York City school system for several years, Rick served at a middle school in the South Bronx neighborhood of his childhood. He employed several of the students as summer interns and for years he has been involved with the charities he supports.

Associate Editor Noemi Smith has been part of the Manhattan Bride family since 2010. She recently earned an MBA from the NYU Stern School of Business with specializations in Marketing, Luxury Marketing, and Digital Marketing. She completed her undergraduate studies in Hispanic Literature at Columbia University, where she was named a PALS Scholar (Program for Academic Leadership and Scholarship), earning a full-tuition scholarship.

During her undergraduate years she founded a company named Glow, offering personal training and nutrition services to clients in Manhattan. In recent years, she has worked at New York University in development for Global Public Health, Science, and Technology, helping to facilitate collaboration to pursue major grants and sponsored research from major corporations and foundations.

At Manhattan Bride, she serves as stylist on the publication’s award-winning fashion shootings, working on-location at local sites, ranging from the elegant ballrooms of grand estates to the rolling hills of spacious country clubs.

She manages the Bridal Beauty and Bridal Services pages, where she regularly reviews beauty and skincare products and services to help brides create their personal pre-wedding beauty routines. She travels to exotic locales to create some of the magazine’s honeymoon pieces.

Noemi is also thrilled to announce that she and her husband are now proud parents of a new baby boy! 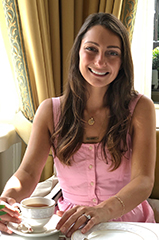 During her college years she was inducted into the English Honor Society, Sigma Tau Delta, and worked as a copy editor for the University Newspaper. Kate participates in various charity runs and spends her spare time volunteering at the local animal shelter. Travel has always been a big part of Kate’s life, and since graduating she has been able to visit over 20 countries with her husband through budget traveling.

Kate coordinates and edits Manhattan Bride’s acclaimed Real Weddings section, working closely with brides, photographers, and venue professionals to tell each wedding story. She loves discovering the personal details that come together to make each couple’s special day. Kate also travels to exotic locales to help create some of the magazine’s honeymoon pieces.

Through his charitable, financial, and business management work, Executive Publisher Richard I. Kandel has traveled the world, developing close ties with many segments of the leading art, fashion, and film communities. He has been a long-time associate of our Editor-Publisher, having collaborated on various charitable projects for over 20 years.