You are at:Home»Insights»Traditions | The Chinese Wedding 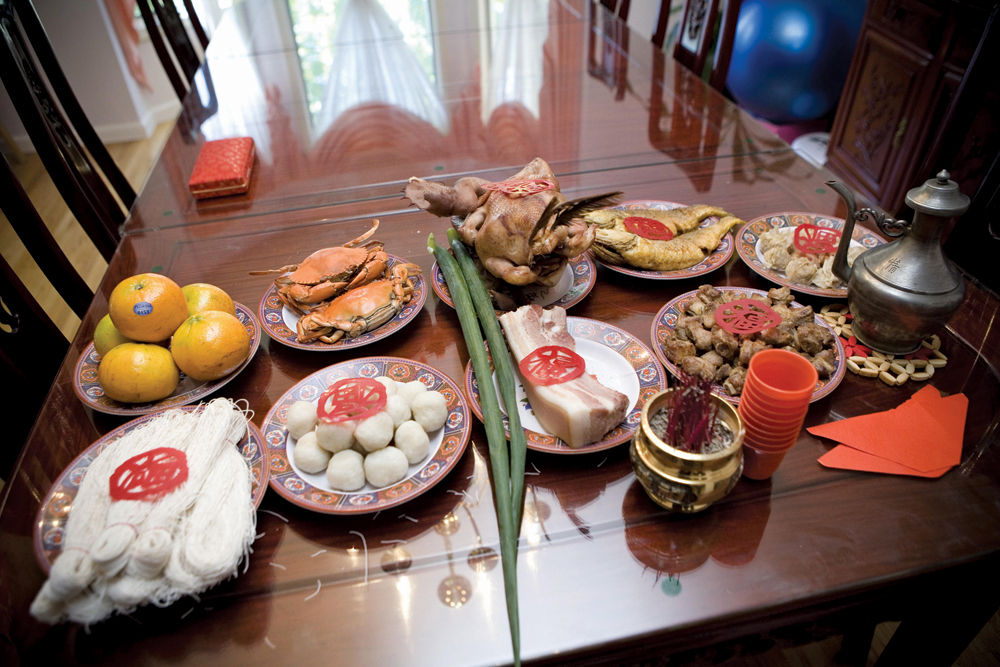 “In the early morning of your wedding day, as part of the Chinese tradition, you pray to your ancestors,” says Jeff Hou, who married his bride, Donna Kwok, at The Roosevelt Hotel. “You tell them you are getting married and ask them to bring good luck to you.”

And then the fun begins ...

A Pre-Wedding Trial By Fire

“The bridesmaids gave me a hard time,” says Jeff. Before the ceremony, it’s traditional for the groom, assisted by his friends, to try and take the bride from her home and bring her to the wedding. “But the bridesmaids are trying to defend the bride, all the while making sure the groom is worthy of her,” says Jeff, who endured a series of tests.

“Before I even walked in the door, I had to give the bridesmaids an envelope with money inside for good luck.” 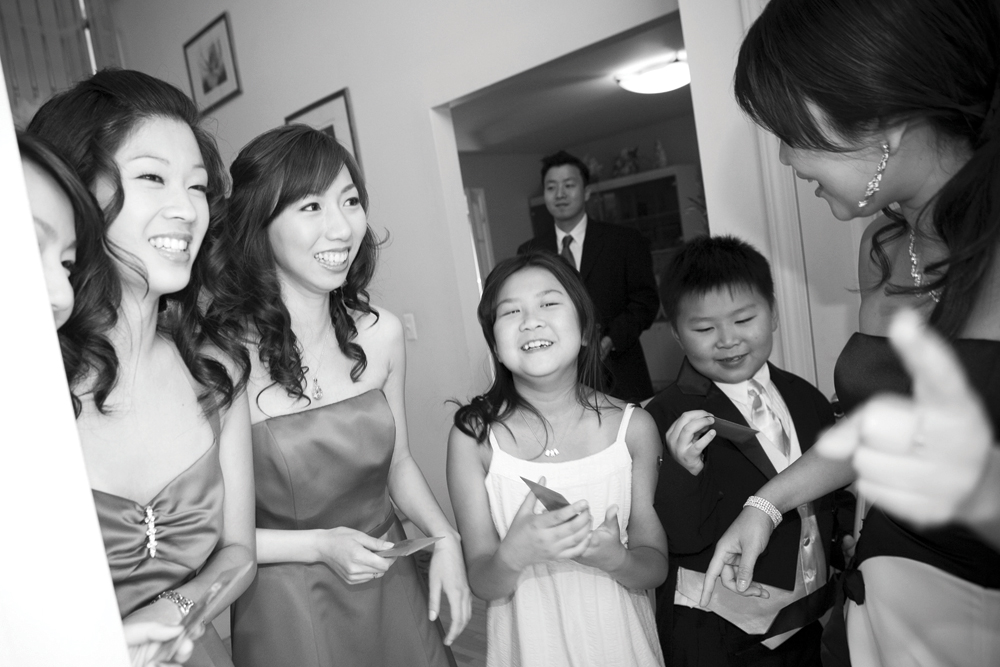 Keeping with tradition, the bridesmaids  assemble at the bride’s house ... 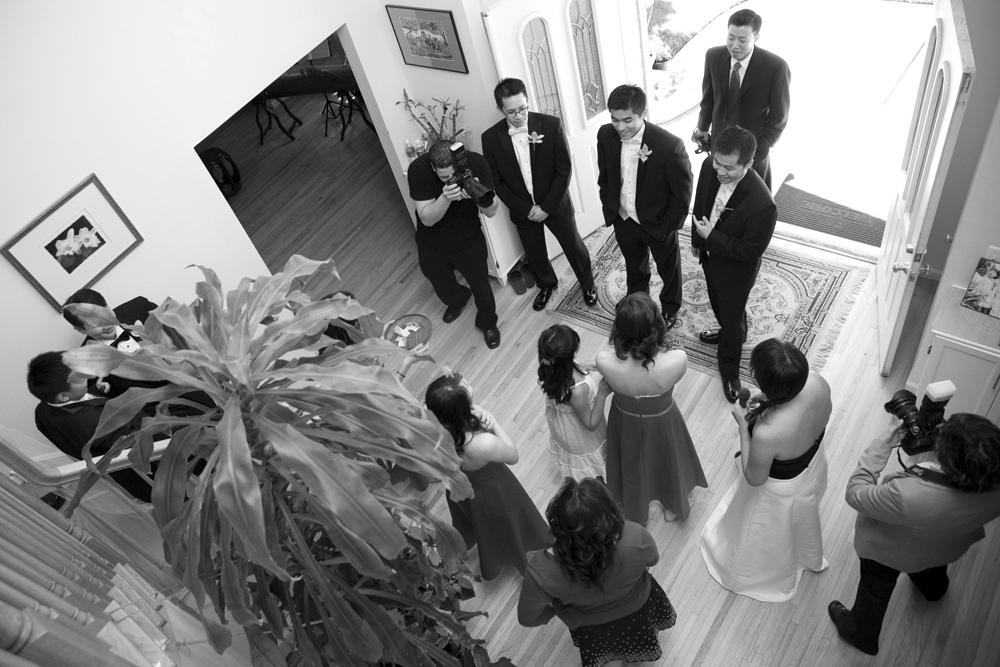 ... they confront the groom and his groomsmen ... 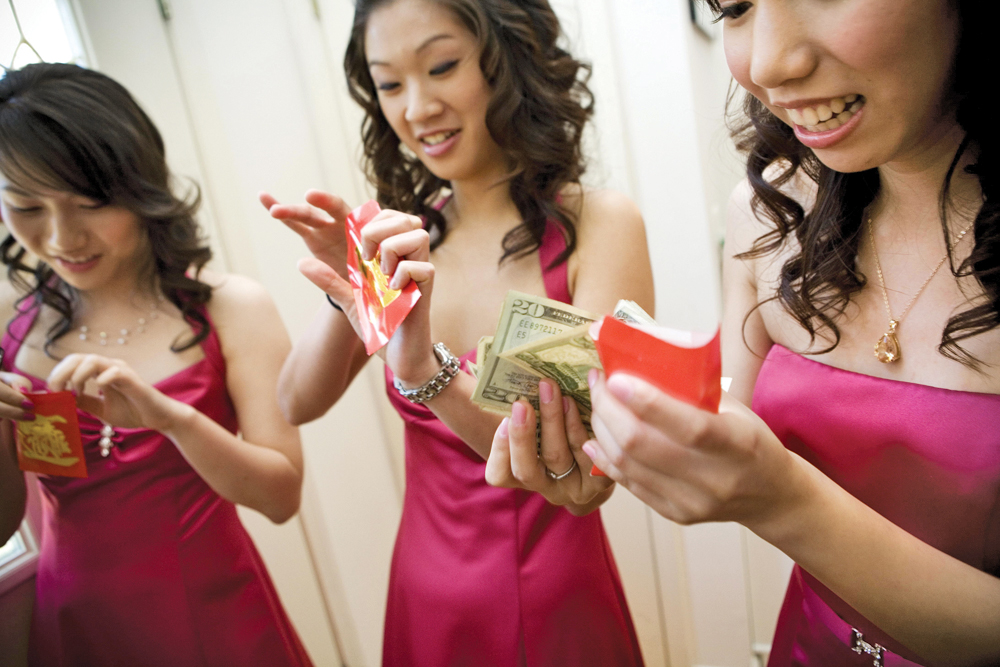 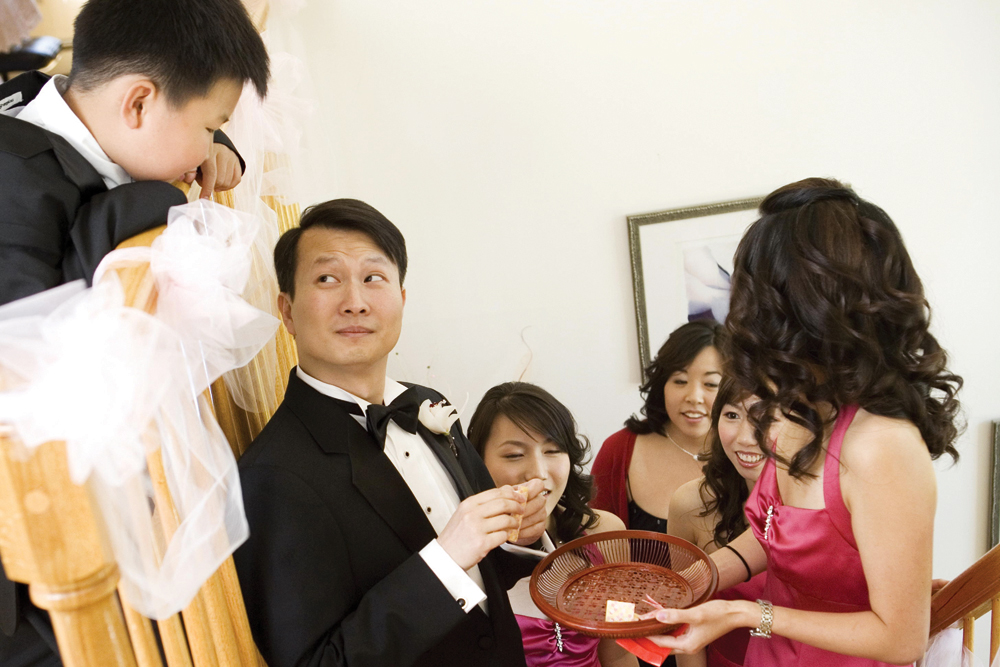 ... they let the groom advance one step for each correct answer ...

Once in the house, the first thing the bridesmaids had Jeff do was pushups. “That was to show he was strong enough for me,” says Donna.

The testing also extends to the groomsmen. “They had to dance in time with the speed of the music,” says Jeff.

“Then Jeff was asked a series of questions,” says Donna, “about things like our first date, our first kiss, and the first movie we saw together.”

For every correct answer, Jeff could go up one more step to his bride’s room. But if he answered anything wrong, he and his groomsmen would get punished. They would have to do pushups, put on lipstick, or do “whatever the bridesmaids could come up with. It was a lot of fun,” he says, with an understandable touch of irony.

“The questions are created by the bride together with her bridesmaids,” says Donna. Though it’s traditional to test the groom, there are no standard questions to ask and no standard physical tests either. “It’s all just to have fun.” 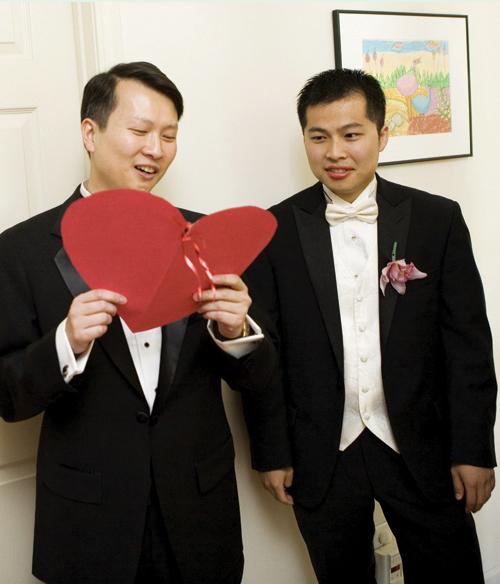 ... the groom must sign the bridal contract created by the bridesmaids ... 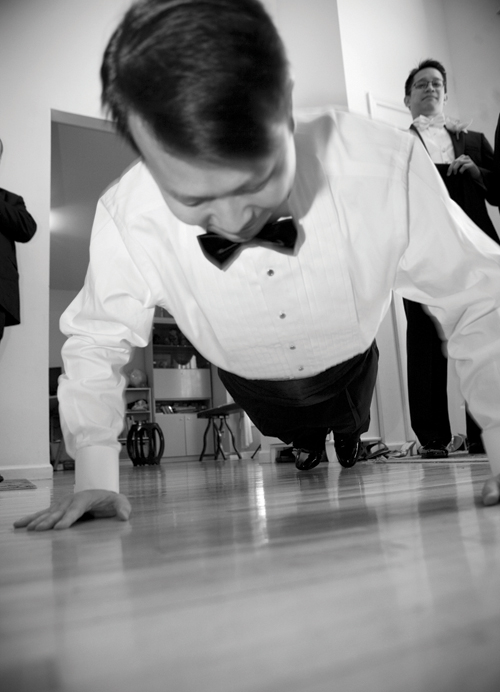 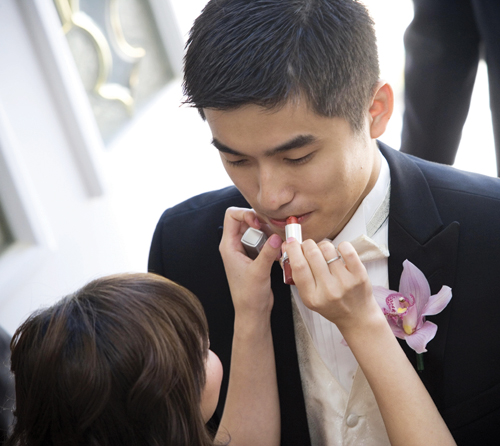 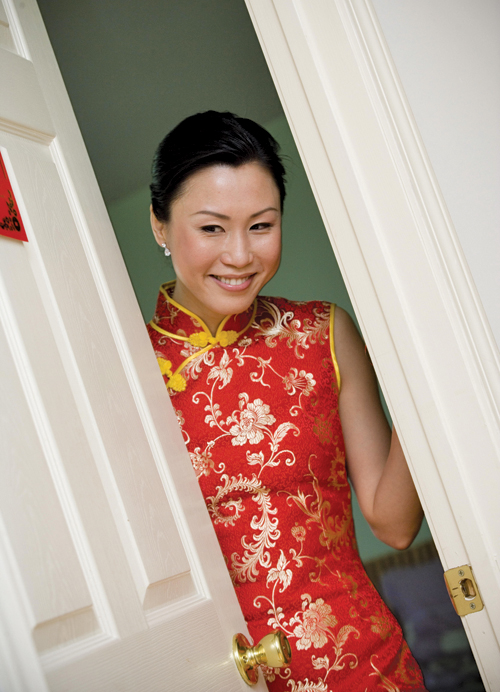 “Once I got to the top of the stairs, they had a contract for me to sign,” says Jeff. The bridesmaids had created it, making him agree to surrender all his rights, to obey everything his wife would say, and to give up all his money too.

After he signed the contract (the bridesmaids gave him no choice) he was blindfolded. “Then the bridesmaids led me into another room. They asked me to kiss an orange, which symbolizes good luck and prosperity, and then to kiss the wall, which had a picture of two babies, signifying that we will have a family.” One end of a string was attached to Donna’s wrist and later they gave the string to Jeff, so he could follow it to his bride. “Donna untied my blindfold and I finally got to see her!”

“I was laughing so much,” says Donna. “It wasn’t until he finished kissing the two baby pictures that I came in and he got the string tied to my wrist, so he could find me. It was all a lot of fun. Everybody was laughing.”

The traditional ‘Double Happiness’ logo is associated with joyful life-long unions. The ancient symbol for marriage, it is made of two symmetrical characters. Each half is the standard Chinese character for “Happiness,” and together they represent “Double Happiness,” good fortune for both the bride and the groom.

Traditionally, the symbol was cut into a piece of red paper and hung on a wall to express the newlywed’s joy. You still see this logo throughout the modern wedding. A couple might put it on their limo window or hang it in the venue for the ceremony and the reception. 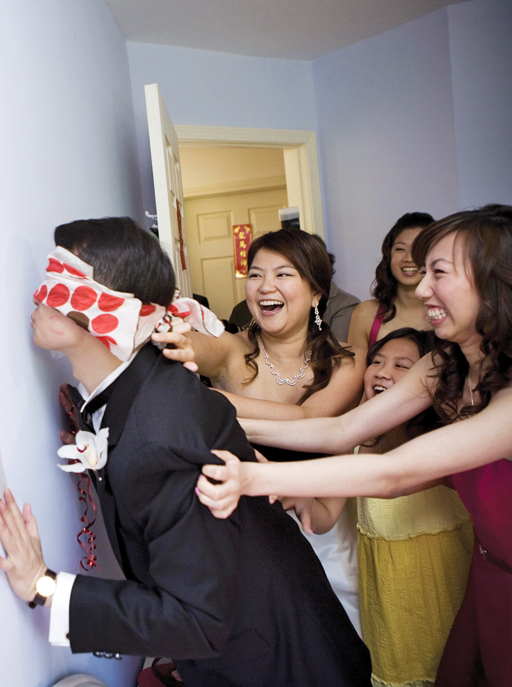 ... kissing the wall near a baby picture,  for good luck ... 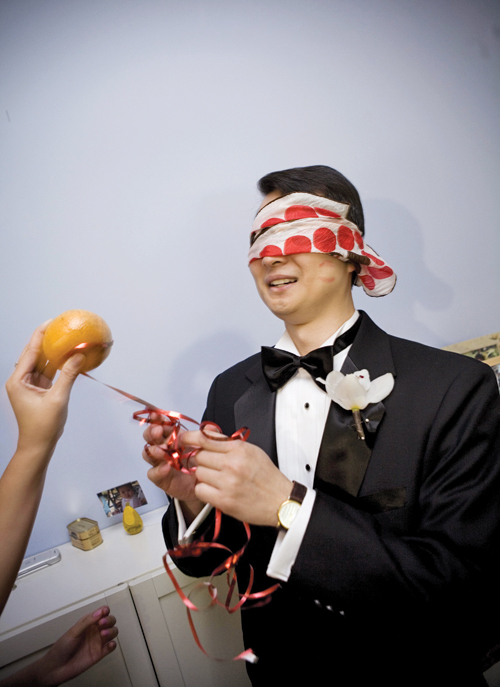 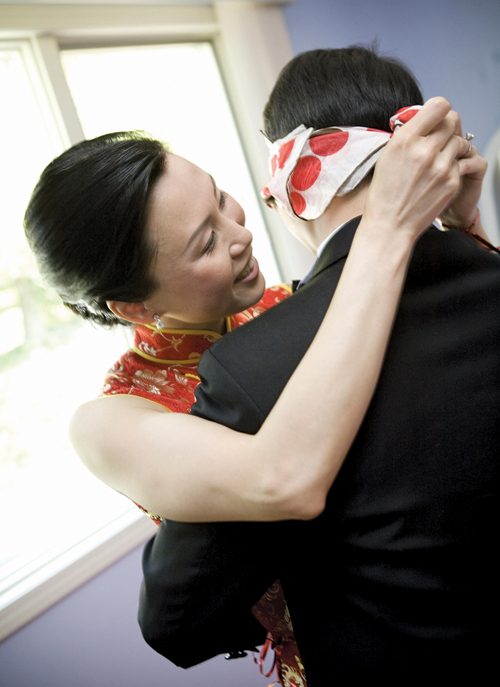 ... finally, his bride-to-be removes his blindfold ... 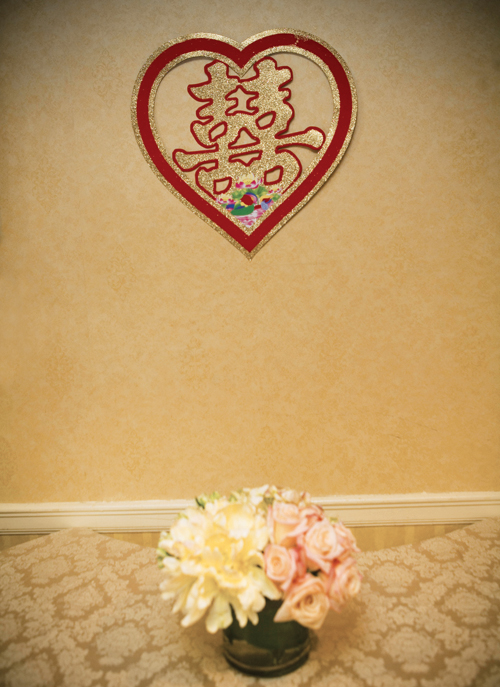 Among the most popular Chinese traditions is the tea ceremony. “It pays respect to both sets of parents,” says Jeff. “Typically, you do it twice, once with the bride’s family at her parents’ house, after you see your bride, and then again at the groom’s parents’ house. You kneel down in front of the bride’s parents and thank them for raising her.”

“You offer tea to the parents,” adds Donna, “and they offer gold jewelry to the bride and groom. It’s a symbol of good fortune as you start your life together.”

Donna and Jeff also did the tea ceremony for their parents at their wedding venue, The Roosevelt Hotel. “Most of the time we arrange the State Room, our hospitality suite, for the tea ceremony,” says Ferinoosh Khosravi, senior catering and special events manager at The Roosevelt. Candles were placed in the suite, and, just as they do with all the areas for the wedding, Ferinoosh and her team made sure there was no black fabric of any kind in the space. “For the tea ceremony, we provide traditional Chinese tea and the tea pot, and also offer red and green grapes, cheese, bread, and assorted tea sandwiches. We might also provide dried fruit and traditional Chinese sweets as well,” says Ferinoosh.

“After the tea ceremony, we had noodles and a big bowl of soup along with a whole boiled egg,” says Jeff. In the Chinese tradition, many foods carry symbolic meanings. Noodles, for example, are for longevity, and fish are for wealth. Oranges are for prosperity and red eggs are for fertility.

While traditional Chinese cuisine varies by region, certain dishes are said to bring fortune and fertility when eaten at the wedding celebration. In Old China, if you had a lot of children it meant your family would prosper because you would have labor for all your fieldwork, so it was highly desired to have children as early as possible, and some of the foods reflect this wish. For example, the Chinese word for peanut is pronounced “Hua-sheng,” which also means “to have a mix of boys and girls.” At many weddings, shelled peanuts are roasted and placed on the table.

A good luck soup with lotus seeds and dates is also commonly served. The pronunciation of “dates,” is “Zao-zi,” which also means “to have a baby soon.” In Chinese, “lotus seeds,” are pronounced “Lian-zi,” which means that you’ll have one child after another. People believe these foods convey good wishes that will help the couple have children soon after they marry. 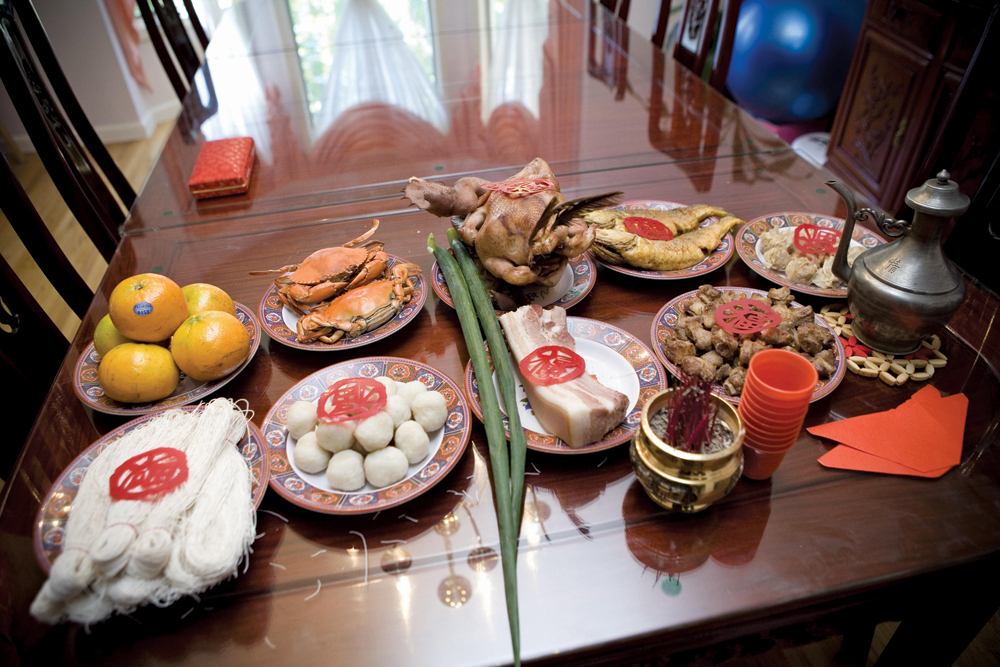 Then ... the traditional tea ceremony before the wedding itself. 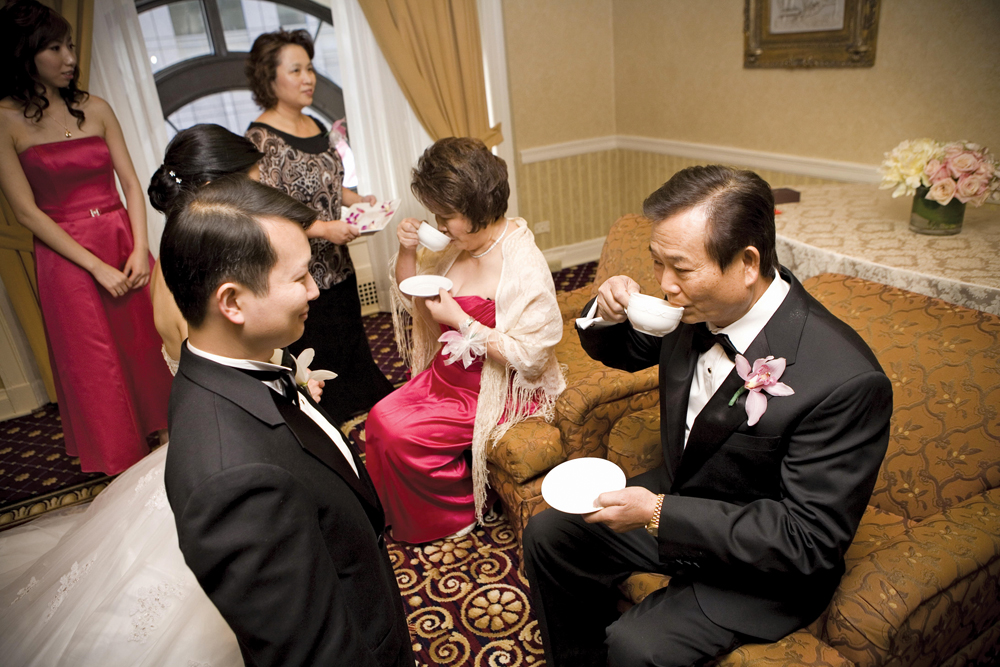 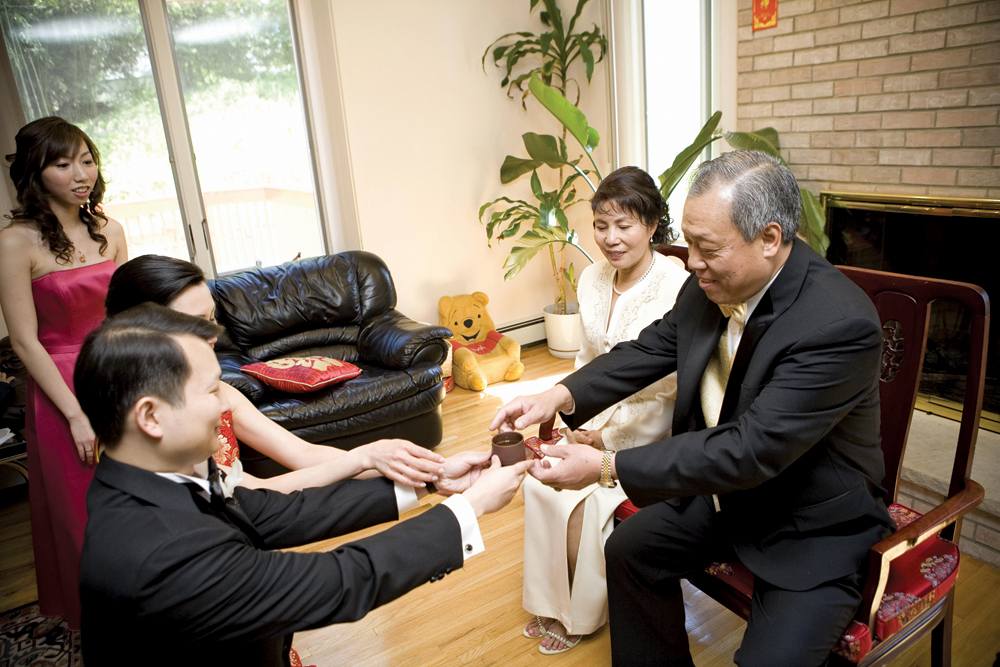 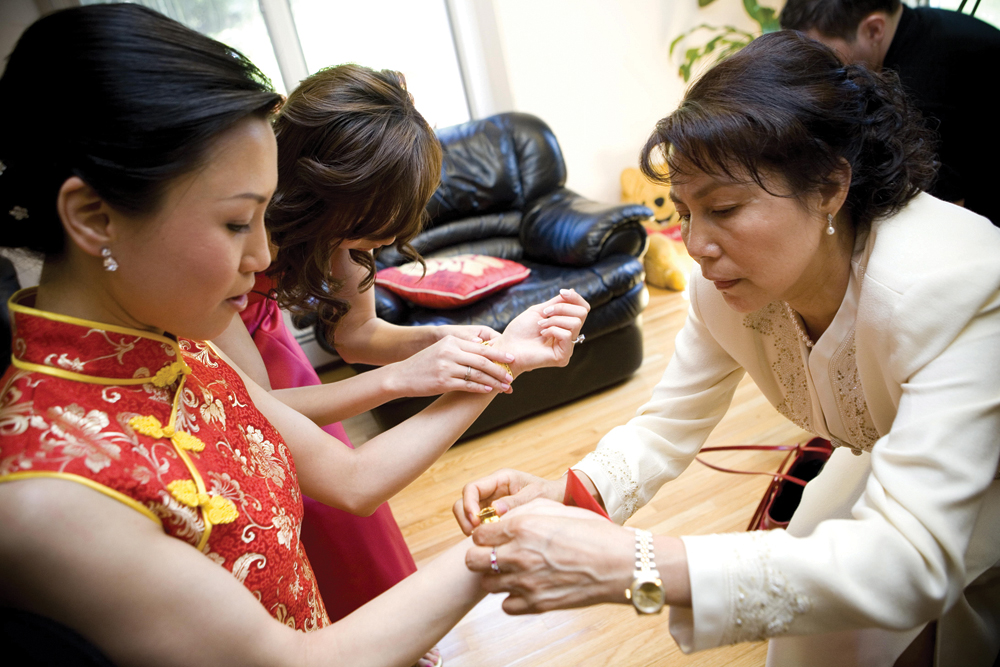 Some 50 to 60 years ago, most marriages were performed during the wedding banquet itself, without an officiant. A respected elder or someone in a high government position would certify the wedding.

Today, an officiant presides, and the families still invite almost everyone they know. Traditionally, guests also would bring the couple large pieces of red silk fabric to decorate the banquet hall. Each piece often would have the “Double Happiness” symbol in gold lettering, while also displaying the name of the person who gave it. Today, other items, often incorporating the symbol, are given.

Food at the traditional banquet might include delicacies such as shark fin, abalone, lobster, and duck, or more traditional items like chicken, fish, duck, and shrimp.

“In the Chinese tradition, it is important to incorporate certain foods into the menu,” says Ferinoosh. “I always make sure the menu covers the eight major symbols: happiness, longevity, fertility, selflessness, abundance, peace, and sweet life together, as well as both the male and female roles symbolized by the dragon and the phoenix.

Serving different items together, as well as how they are served, has additional meaning. “For example, serving the duck and lobster in whole symbolizes completeness, while serving both lobster and chicken at the reception would symbolize balance in the couple’s new relationship.

“Tea, alcohol, and 7-Up are always served at the reception too,” says Ferinoosh. “The tea is a sign of respect and tradition, alcohol celebrates the happiness of the reception, and 7-Up symbolizes the joy of seven-happiness.”

The typical dessert is something sweet and soft. This tradition dates back to olden times, when milk and cheese were not readily available, so they did not bake cakes as they do today. Instead, they would eat sweet rice and dough filled with sesame paste and red beans. It’s “Sweet and Sticky,” to symbolize the sweetness of the love shared by the bride and groom, and that they also will always stick together. Other variations include sesame rice bowls and rice pudding with sweet nuts and beans. 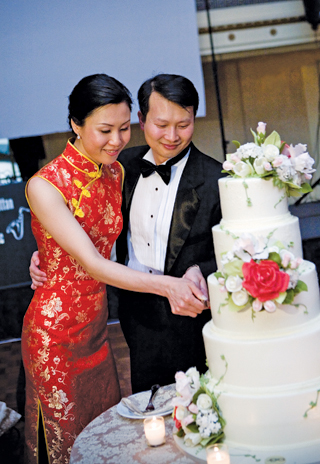 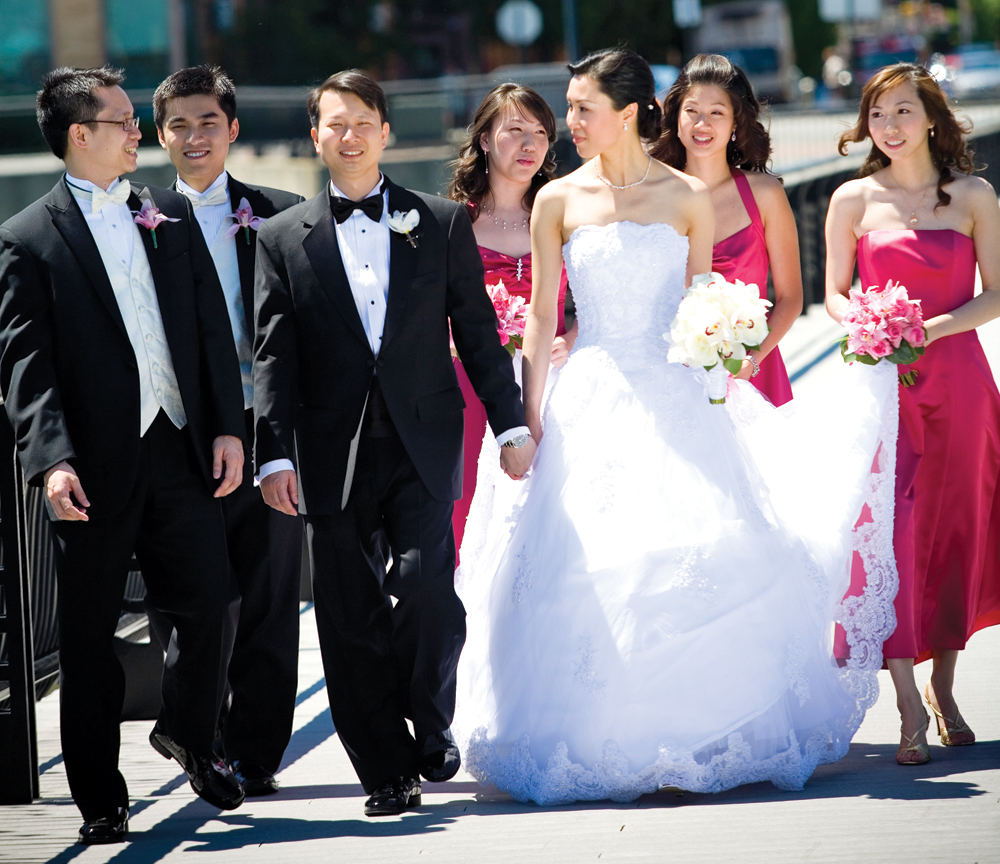 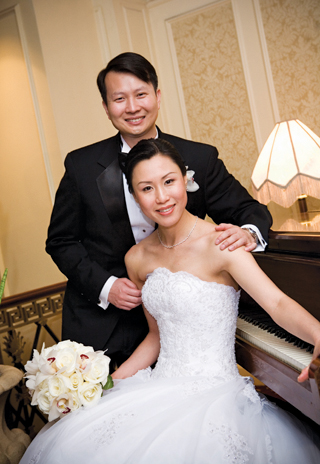 The traditional Chinese wedding dress is the long, figure-fitting Qi Pao. It has a Mandarin collar, cap sleeves, and a slight fishtail bottom with two slits on either side. On the front are Chinese buttons, or “frogs,” which come in two kinds. Straight button frogs are more traditional and date back almost 500 years, while the flower frog is a bit newer, and has become popular as well.

The most traditional Qi Pao will include the design of the dragon and the phoenix on it. The dragon signifies masculinity, wealth, and strength for the groom. The phoenix is the sign for the woman, signifying the most accomplished traits, like a regal queen. Together, the signs mean that man and woman are joining in a marriage of good fortune. Since the dragon represents the male and the phoenix represents the female, it’s also like yin and yang.

In the Chinese tradition, jewelry and accessories also carry meaning, sentiment, and fortune. The bride’s parents or grandparents usually give her a gold necklace for good luck. The necklace is typically a pendant that symbolizes the animal for the year in which the bride was born. Jade and diamonds, often passed down from one generation to the next, are also considered traditional gifts that the mother or mother-in-law typically gives the bride.

The bride’s hair is usually tied up and secured with a bow or a decorative stick called a ‘Tsai.’ Chinese hair bows are particularly lavish, usually custom-made in gold and decorated with pearls and diamonds. The traditional bride also wears a small red flower, either real or silk, on the side of her head.

“We’ve also incorporated some of the Western traditions into our weddings,” says Donna. “So in addition to our Chinese tradition of bridesmaids, now we’ve added the best man and maid of honor.”

There are also traditions about behavior on the day of the wedding. “There should be no cursing, crying, or arguments,” says Jeff. “You shouldn’t do anything negative, so you don’t talk about sickness or even bad economic news. You have to be happy, to avoid bad luck.”

“In the old days, the groom’s family would look down at the bride if she came empty-handed,” says Donna. “Back then, gold was a tradable asset. Now the dragon and phoenix bracelet is a must for the mother to give to the daughter during the tea ceremony.”

In the Taiwanese and Cantonese traditions, the parents decorate the new couple’s room and get new pillowcases and bed sheets in the color red, with a dragon and a phoenix sewn into it. “They are important symbols, so we need them to come from the bride’s family.” The groom’s family decorates the new home of the bride and groom. “Also, in the Chinese tradition, the bride does not wear white,” says Donna. “She wears red, a symbol of good luck.”

“Red is also a symbol of happiness,” says a smiling Jeff. “It is a happy color. Yes, the double happiness signs from our wedding are still up in our home. They are designed to last, and they will be with us forever.”  (photos: True Love Wedding)