You are at:Home»Insights»Honor Your Loved Ones 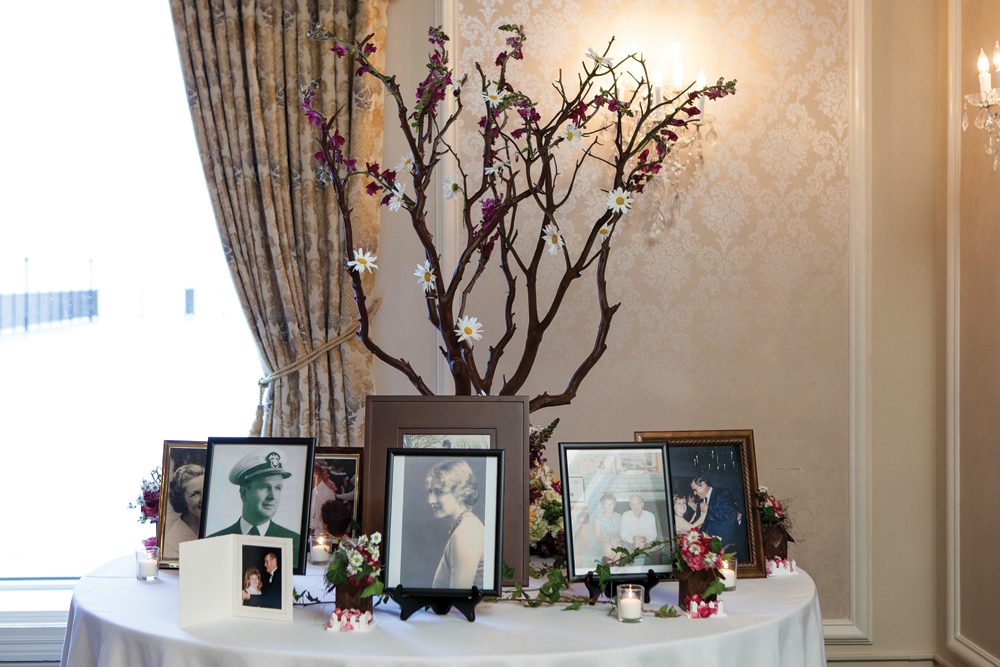 A Loving Remembrance: “An ‘In Memoriam’ table is an excellent way to honor loved ones. We placed a flowering tree in the center of the table, surrounding it with photographs of the special people in the couple’s lives who had passed away.”

They wanted a garden-themed wedding for what turned out to be a snowy day in the middle of March. “The wedding would be in New Jersey,” says Claudia Charles, senior wedding specialist at Flore Events, “but the bride and groom lived in Texas and were not planning to come into town until one week before the wedding!”

Claudia spent hours with the couple on the phone, on email, and on Skype, listening to them describe their vision. “They wanted their guests to feel like they were at a springtime garden party full of color, with trees, grass, and flowers. They had a specific vision for their wedding but were unsure how to bring it to life.”

After her initial research, Claudia gave the bride a list of spring flowers with accompanying color photographs. “The bride and I went through the list and she told me which blooms she liked and which she did not want at her wedding.” 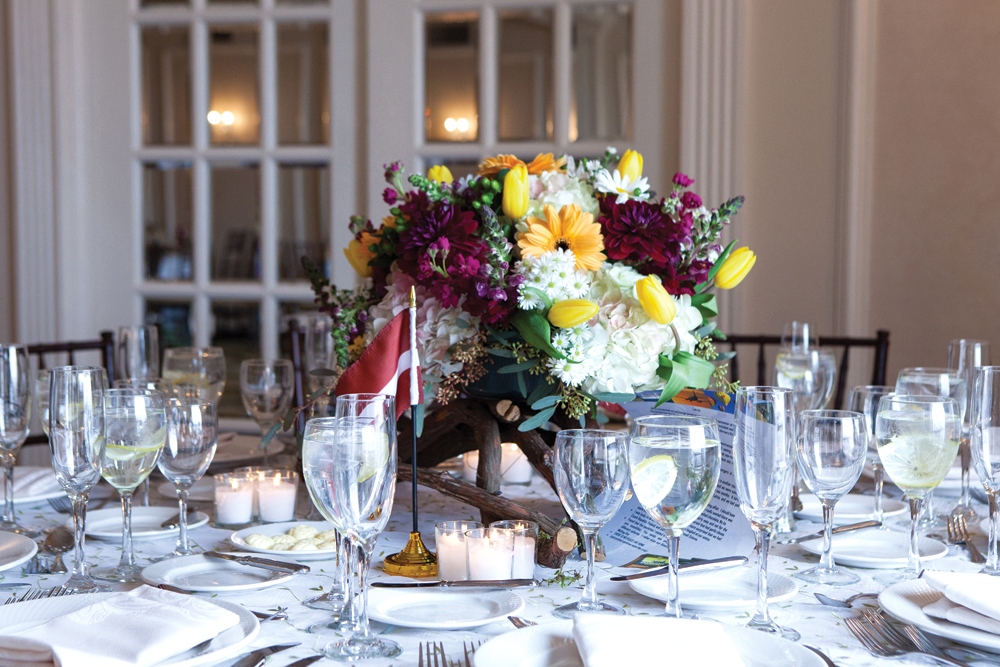 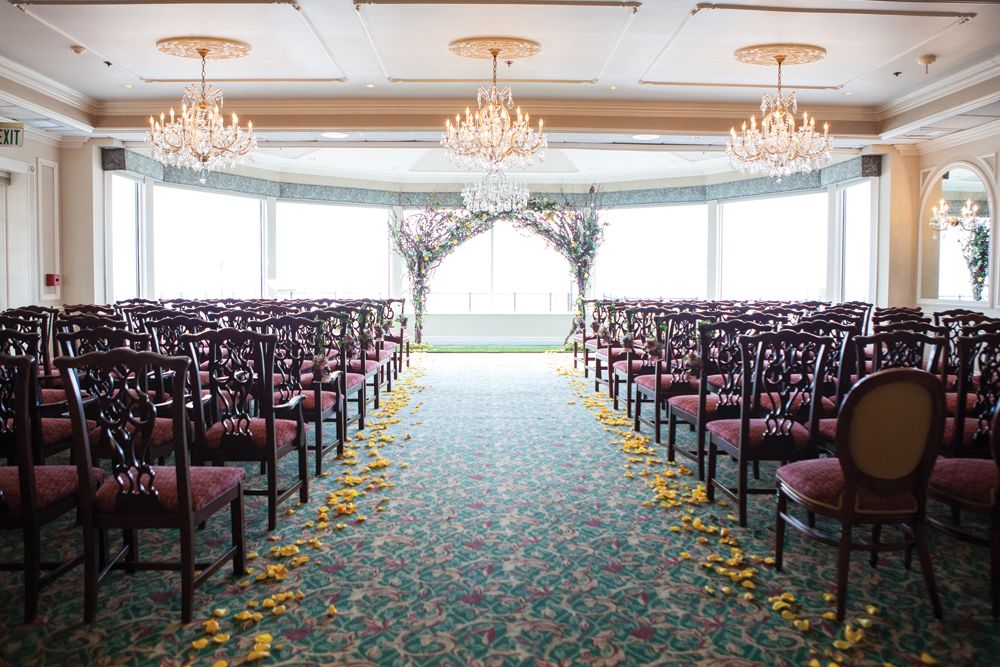 A Garden in Bloom

For their centerpieces, Claudia suggested foregoing glass or metal vases in favor of a container that would suggest a table garden.

After more research, inspiration hit, but as she did throughout the long-distance planning effort, Claudia immediately scheduled a Skype meeting with the couple. “I wanted both my bride and groom to see every element, despite being over a thousand miles away in Texas. I wanted them to know they were always in control of their wedding.

“Ultimately, the couple fell in love with a centerpiece that had a base of stacked wood and moss, on top of which were the bride’s floral picks, including yellow gerbera daisies, burgundy dahlias, vintage hydrangeas, yellow tulips, and berries. Overall, the centerpieces resembled a garden in full bloom.” 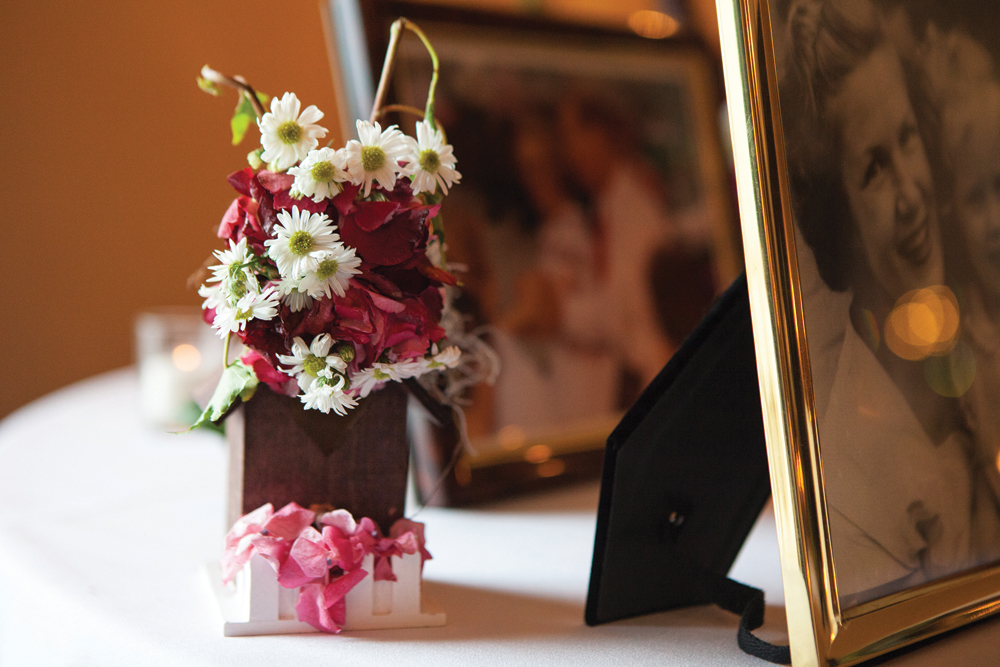 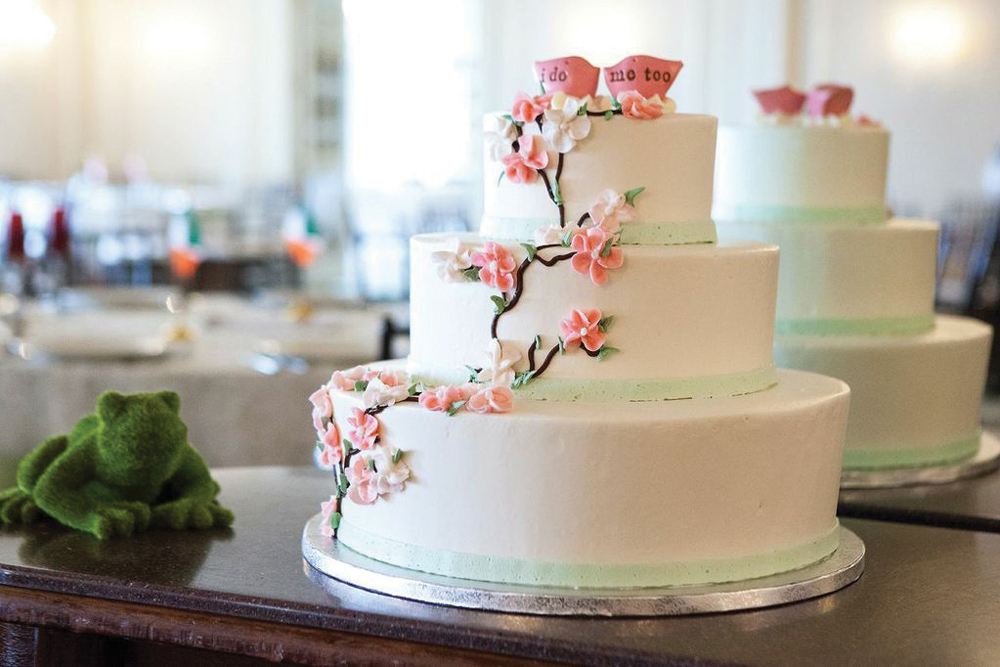 Based on their conversations, Claudia knew the couple wanted to keep the ceremony space simple. “The bride often said, ‘We don’t want our wedding to be over the top.’ I spent hours talking to her to understand precisely what ‘over the top’ meant for them.” 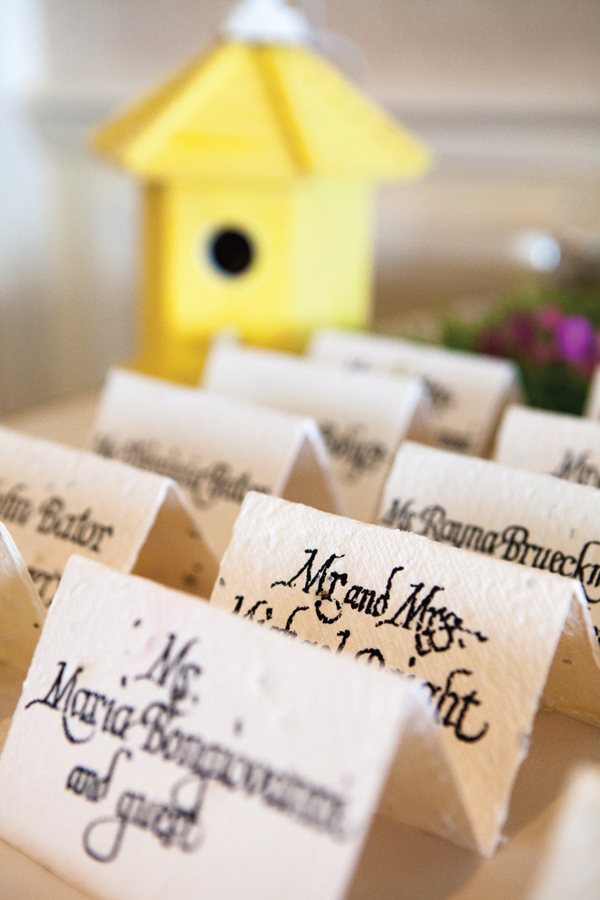 In keeping with the spring garden party theme, Claudia suggested the ceremony space have an arch formed by two eight-foot high trees adorned with more of the bride’s floral picks, in yellow, burgundy, and white.

She located a company that makes custom aisle runners resembling real grass. “Rather than placing it down the aisle, however, I suggested putting it under the tree arch to create the couple’s own garden, and it was under that arch, standing on that grass aisle runner, that the couple recited their wedding vows.”

To add even more color, Claudia suggested scattering yellow rose petals down the aisle instead of having a traditional cloth aisle runner. Additional elements, such as a frog-shaped topiary adorning the cake table, “the bride had a penchant for frogs,” and a wedding cake decorated with cherry blossoms, brought the couple’s spring-themed wedding vision to life.

“I was profoundly moved when the bride expressed how important it was for her to honor her deceased father on her wedding day. When she talked about him not being there to walk her down the aisle, I knew I had to incorporate her father into the ceremony in a memorable way.”

The bride’s father was an avid birdwatcher whose favorite pastime had been building birdhouses. Claudia suggested using mini birdhouses as pew markers down the aisle, and also on the placecard table, to represent her father’s presence. “I will always remember the silence on the telephone after I made the suggestion. I was politely waiting for the bride to say something when I heard her gently sobbing. And then, with a cracking voice she said, ‘Yes. That would be nice. That would be perfect.’ ” 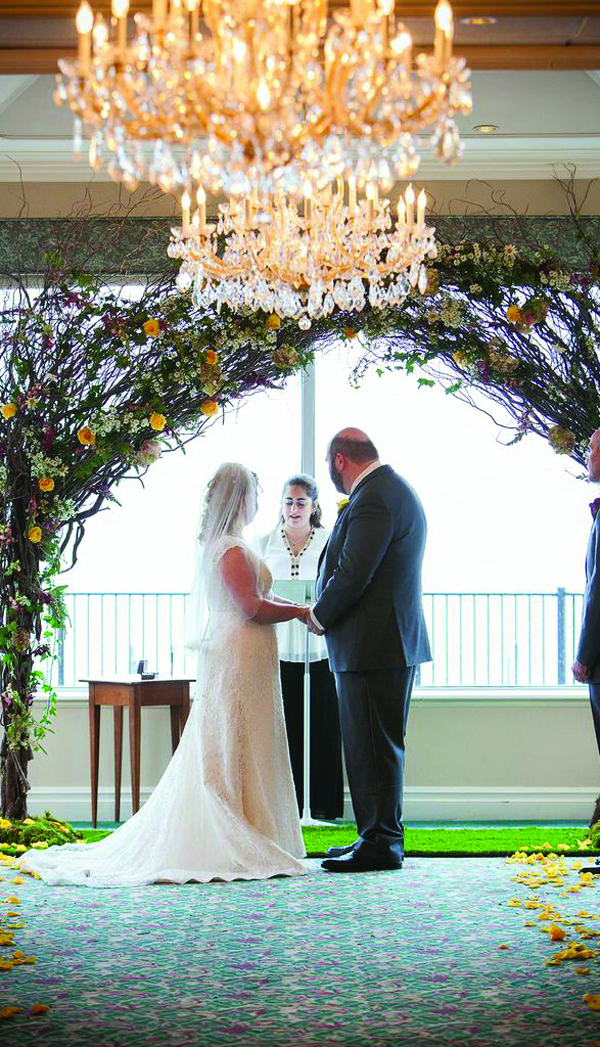 The birdhouses became Claudia’s special project, “because that one conversation said it all. This couple was about sharing the day with the people they loved most. That was what my bride meant when she was saying they did not want an over-the-top wedding. They wanted the simplicity of a beautiful spring day with family and friends.” Claudia hand-painted 12 birdhouses. On top of each was a crown of white and burgundy flowers and each was suspended by actual vines.

“When the bride saw the ceremony space, she exclaimed, ‘You brought together all my jumbled ideas and made them all work!’ She threw her arms around me and gave me a big hug.”

The couple requested an “In Memoriam” table for the reception area. Claudia had a flowering four-foot Manzanita tree placed in the center of the table, surrounding it with photographs of the special people in the couple’s lives who had passed away, including the bride’s beloved father.

“It was truly moving to see the bride’s mother standing at the table, looking at photographs of her departed husband. Those visual reminders of him made the day even more special.”

Claudia and the team at Floré Events are proud they met the couple’s expectations. “We did it by carefully listening to their vision and by paying attention to every detail,” says Claudia.

“We believe there is no limit to creativity once you take the time to learn the couple’s wants and needs,“ says Michelle Flores, the founder of Floré Events. “We help our couples realize the full potential of their vision. By listening to what was important to this couple, we were able to help them bring to life a magical springtime garden wedding on a cold and snowy winter’s day.”