You are at:Home»Insights»Glamorous Events | Honoring Your Traditions

The Best Advice They Got? “Take a minute to look around and enjoy everything!”

A Unique Celebration. "For the henna night, we took their concept of a bazaar and created giveaways so guests could have a shopping experience, with anklets, bangles, necklaces, earrings, and a customized jasmine perfume."

Bringing The Outdoor Concept Inside. "Due to rain we moved the the altar inside, where we had prepped greens and flowers the bride and added a rustic structure for an outdoor feel."

Create a Wedding Honoring Your Traditions

FROM THE BRIDE ... “We met on the dating app Hinge,” says Komal Shah, a physical therapist, who recently married Chirag Domadia at The Tides Estate in North Haledon, NJ. “Chirag had posted a picture of himself hanging from a basketball rim and I was curious to know if he truly made that basket.” (He did.) They decided to meet for a date the following week, but Komal was impatient and wanted to meet sooner. This was in February and Chirag said it was too cold outside. “After bugging Chirag for about 30 minutes, he agreed, and we met for a coffee date that neither of us would ever forget.”

“It was like minus two degrees out that day in February and I was just being lazy,” says Chirag, who is a lawyer, “but I am so glad I got motivated!”

They began dating and also started traveling, with trips to St. Maarten, Colombia, London, and then to Lisbon, where he proposed.  “Chirag kept asking if I would be fine going to the beach at sunset on Sunday. He also wanted to wear the perfect outfit for our beach excursion and wanted me to wear one of my new dresses. After doing some sightseeing, we made it to the beach, where a photographer was waiting. Chirag popped the question, and l said yes!”

“Hiding an engagement ring for a full week while on vacation is super hard!’ says Chirag. “Everything about this was wonderful, and even though she may have realized what was going to happen, Komal went along with it and the moment was surreal.” 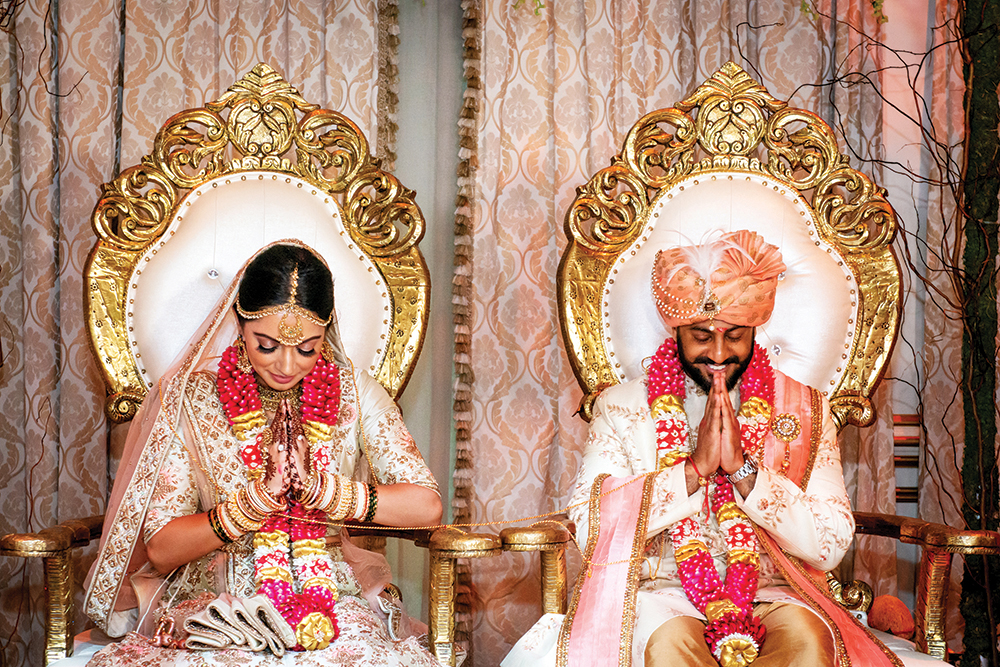 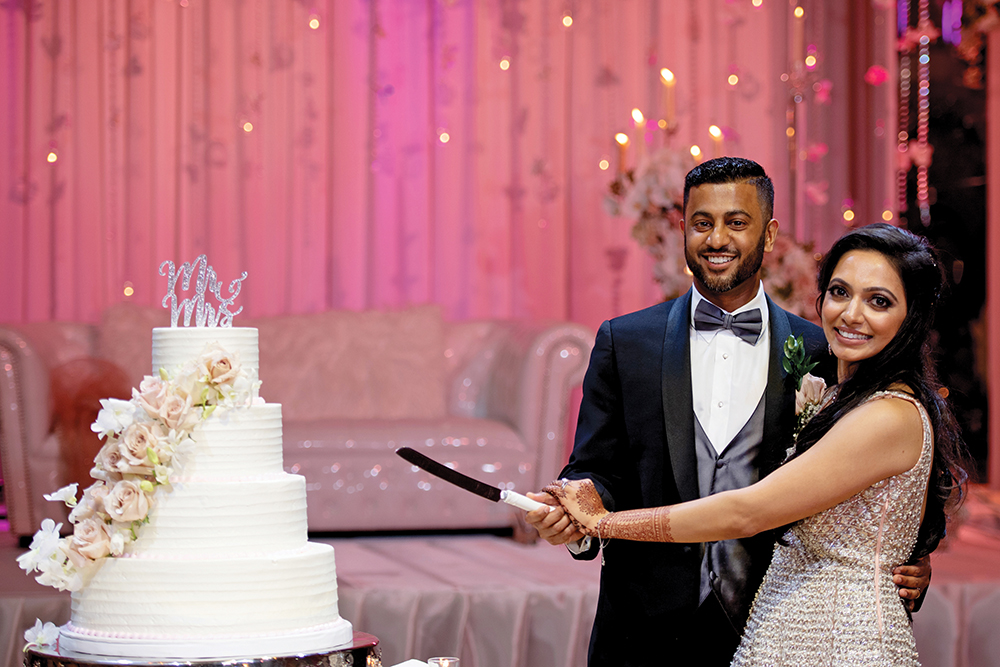 Their Wedding Vision ... “Our vision for the wedding was to have an outdoor ceremony and an indoor reception,” says Komal. “However, it was pouring the day of the wedding! But our planners, Sunita and Tejal, did some quick thinking and moved everything inside, and we still had our lush garden theme. For our reception, we wanted to show off the elegance of the venue and they created a glamorous, classy feel.”

Komal tells us it was great working with them. “They took my vision and made it a reality. They also were very good about telling me what would look best based on our venue.”

What was the best advice Komal and Chirag got for their wedding? “Take a minute to look around and enjoy everything!”

From the Planners ... “Like every bride and groom, Komal and Chirag had their own vision,” says Tejal Kamat of Glamorous Event Planners and Productions. “We listened to their ideas and enhanced them through design. For the henna night, we took their concept of a bazaar and created giveaways so the guests could have a shopping experience. We displayed anklets, bangles, necklaces, tattoos, and earrings, and customized a jasmine perfume for them. Their guests were awed by the concept.

“The second day was the wedding. Our original location was an outdoor gazebo. Due to rain we moved the Mandap, the altar, inside, where we had prepped the greens and flowers the bride and groom had requested. To enhance it, we added a rustic structure and gave it an outdoor feel.

“Komal and Chirag had the same room for their reception, so we transformed the space and went very modern, adding a mirror and blush flowers to their stage.  As they made their grand entrance and walked down a lit staircase, these little touches made the reception stand out." 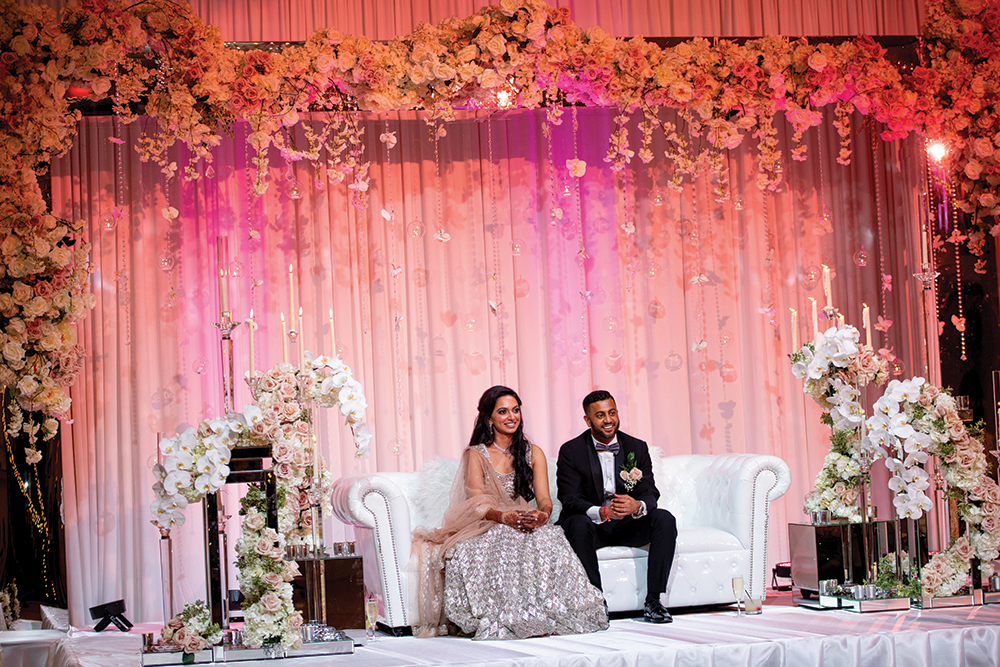 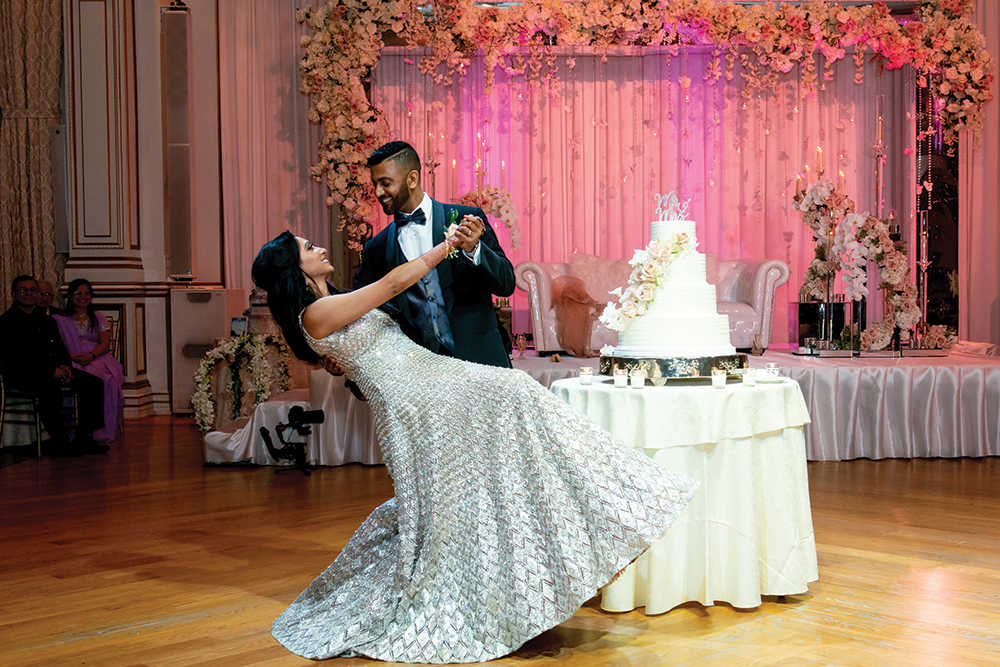 “We’re always researching new and unique ideas. Our brides and grooms come to us and we take their ideas and come up with a concept from beginning to end, guiding them through the process and adding at least one unique item their guests will never forget.”

“We are one of the few companies that does both planning and production,” adds the firm’s founder, Sunita Sadhnani. “Tejal and I work hands-on with the families’ and the bride and groom’s vision. I have my own team that does the production and Tejal has her team doing the planning.  The most exciting aspect is seeing the bride and groom’s face when they walk into the room and see everything!”