You are at:Home»Insights»Traditions | The Greek Wedding 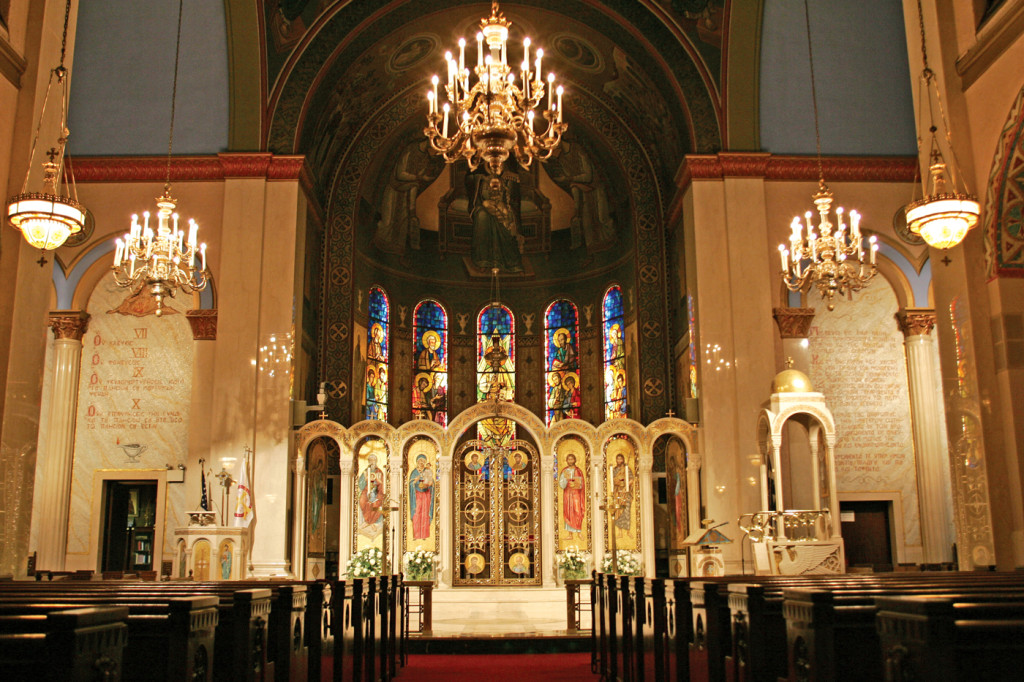 In the Greek Orthodox tradition, certain times months may prove especially fortunate for a wedding. In ancient times, January was reserved for celebrating Hera, wife of Zeus and goddess of marriage and fertility. Later, the Romans translated Hera to Juno and celebrated her in June. So if you are married  in January or June, you are wed under the favor of Hera.

Ancient Greeks celebrated beauty and athleticism through their Olympics and also their fashions, loosely draped gowns gathered at the waist and touching the floor. The form-fitting look suggested the sensuality of their gods, and the elegant goddess gown remains popular to this day.

Ancient Greek brides also wore veils of yellow or red to represent fire and frighten away evil spirits, though brides today wear a traditional white wedding gown for purity. Ancient brides also wore diamonds, which were considered teardrops of the gods, reflecting the “flames of love.”

Western customs have the bride tossing her bouquet, but in Greece this rarely happens. “But the Greek bride does carry a bouquet of white flowers to symbolize purity,” says Theodore Zois of Ariston Flowers. “For a traditional Greek service, I prefer to create a simple hand-tied arrangement of white gardenias. Their fragrance always reminds me of Greece.”

Sugar-coated almonds, or koufeta, play an important role in the Greek Orthodox ceremony. The white of the almond symbolizes purity, the almond’s egg shape represents fertility, and the almond’s hardness personifies the endurance of the marriage. The sweet sugar then suggests the sweetness of married life.

“For gifts, we always give ‘koufeta' which are Jordan sugar almonds,” say Anna and George Maroules, whose Greek wedding at Waterside Restaurant was featured in Manhattan Bride. “The koufeta are blessed at the church while they are in the ceremonial tray, where they are attached in a satchel or box as part of the ‘bomboniere’ or favor.

“The ‘koufeta’ symbolize the bittersweet life of a married couple, and wish the new husband and wife happiness, health, wealth, children, and a long life,” says Anna.

Traditionally, koufeta are shared directly after the ceremony, when the bride and groom greet their guests. In America, they are given at the wedding reception as one of the favors.

The bride and her bridesmaids put together bombonieres filled with koufeta and wrapped in tulle. The number of koufeta is an odd number that cannot be divided or split, to represent how the couple is now indivisible.

“As superstition has it,”Anna tells us, “if a single girl takes koufeta from the church tray and puts them under her pillow for three nights beginning the night of the wedding, she will somehow see the man she is to marry in the future.”

The Koumbaros, or “sponsor” of the marriage, plays an important role in the ceremony, performing rituals. Traditionally the groom’s godparent is asked to serve first. Then the godparent of the bride is asked, and then a close friend or family member may be asked.

Koumbaros play a much more important role than the American Best Man and Maid of Honor. “The Koumbaros are blessed with the honor of later baptizing the first born child,” says Anna. “They also act as spiritual mentors and Godparents to the child.” 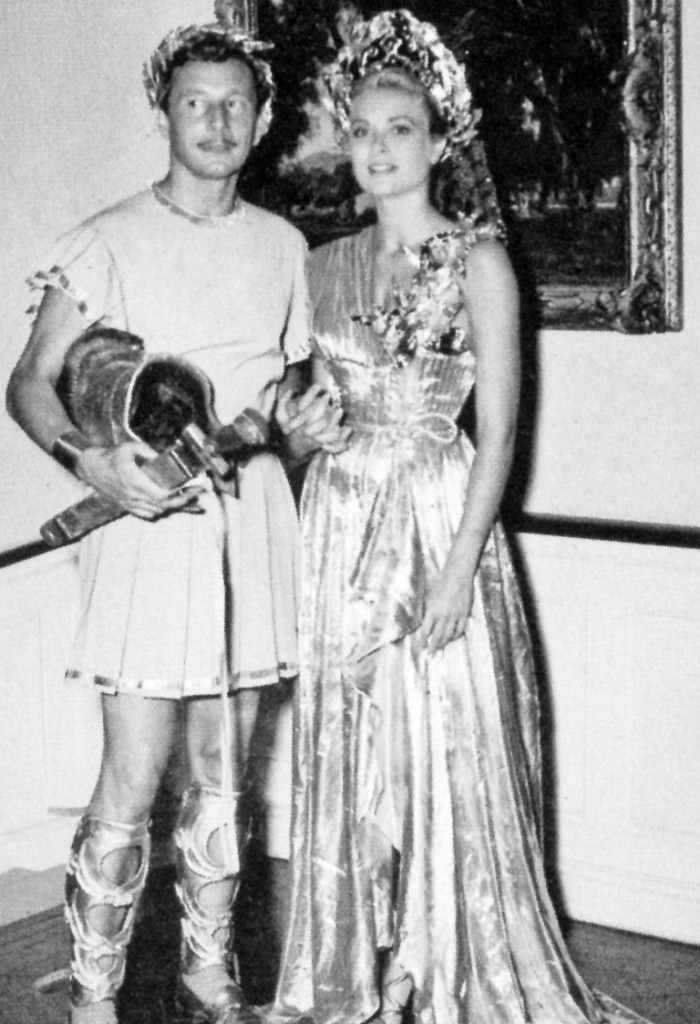 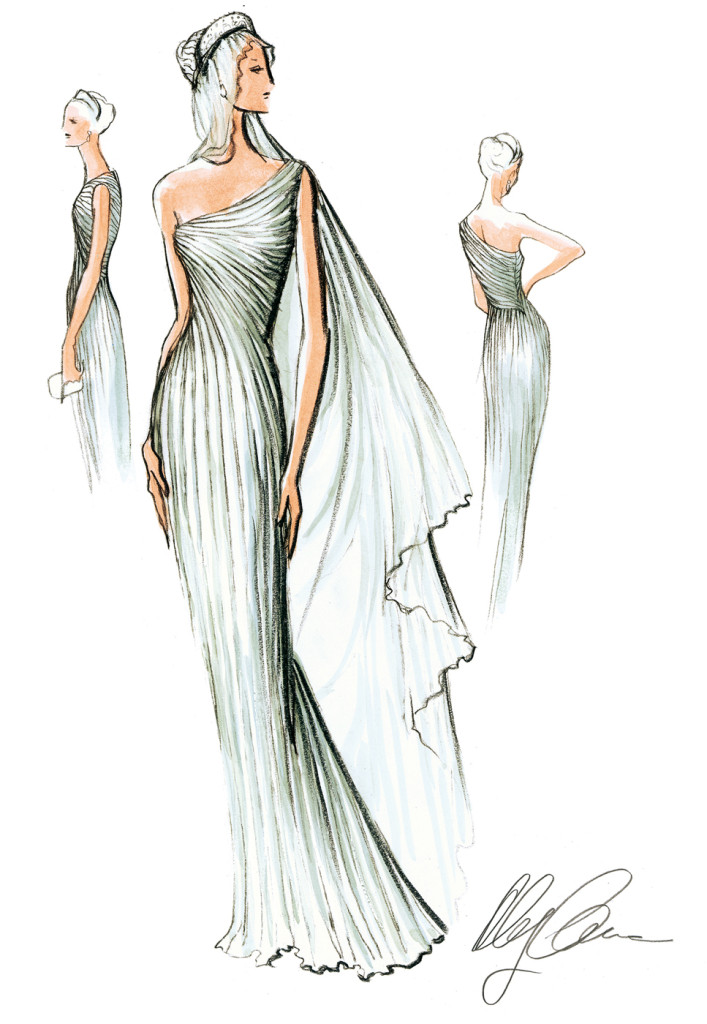 The wedding ceremony in the Greek Orthodox Church is a sacrament, a formal religious rite unchanged since the 11th century. “It is a ‘blessed union’ that implies this must be a permanent union,” says Father Robert Stephanopoulos of Holy Trinity Church.

The wedding service has two parts: the betrothal and the marriage service. The service is conducted at the “matrimonial altar,” a small table on which a special tray holds the wedding crowns, betrothal rings, candles, goblet of sanctified wine, and book of gospels.

The betrothal service recognizes the engagement of the couple by the church and includes the priest’s blessing of the rings. He also alternately blesses the bride and groom three times.

After blessing the couple, the rings are placed on the tips of the ring fingers on the right hands of both the bride and groom. The Koumbaros then exchanges the rings three times between the bride and groom, signifying that the worth of the bride’s wedding band lies within her groom, and vice versa. Husband and wife are now able to complement each other.

To conclude the betrothal service, the bride and groom are each given a white candle from the matrimonial altar. The candles are lit and then held by the couple for the rest of the service, to acknowledge the light of God and remind the couple to stay within that light.

A distinctive part of the Greek Orthodox ceremony is the “crowning” which follows the joining of the hands.

“In terms of fashion,” says Anna, “the stefana are a requirement at the church ceremony.” The matrimonial crown, the stefana, is perhaps the most important element in the styling of a Greek Orthodox bride. The crowns symbolically tie the couple together for the rest of their lives and may also be displayed at the reception. The crowns often are preserved in specialized cases, called stephanothiki, for display above the marriage bed in the couple’s home.

Styles may vary, but traditional crowns were made of delicate white flowers and evergreen leaves, symbolizing fertility. Orange blossoms were used to signify purity, as were roses. Olive branches would be woven in, as well as herbs such as thyme and basil, a tradition remaining from the celebration of the goddess Adephagia, who revealed the secrets of herbs to the ancient Greeks. The ribbon, which unite the bride and groom at the “crowning” of the ceremony, is the traditional white for purity.

Elaborate crowns are often used. They can feature intricate beading or metal work that match the bride’s gown. Couples may even use crowns of porcelain, silk flowers, and imitation gold.

Ariston Flowers has also created stefana for couples. “For the crowns,” says Theodore, “I like to use stephanotis, a small, elegant white flower frequently used in weddings.” 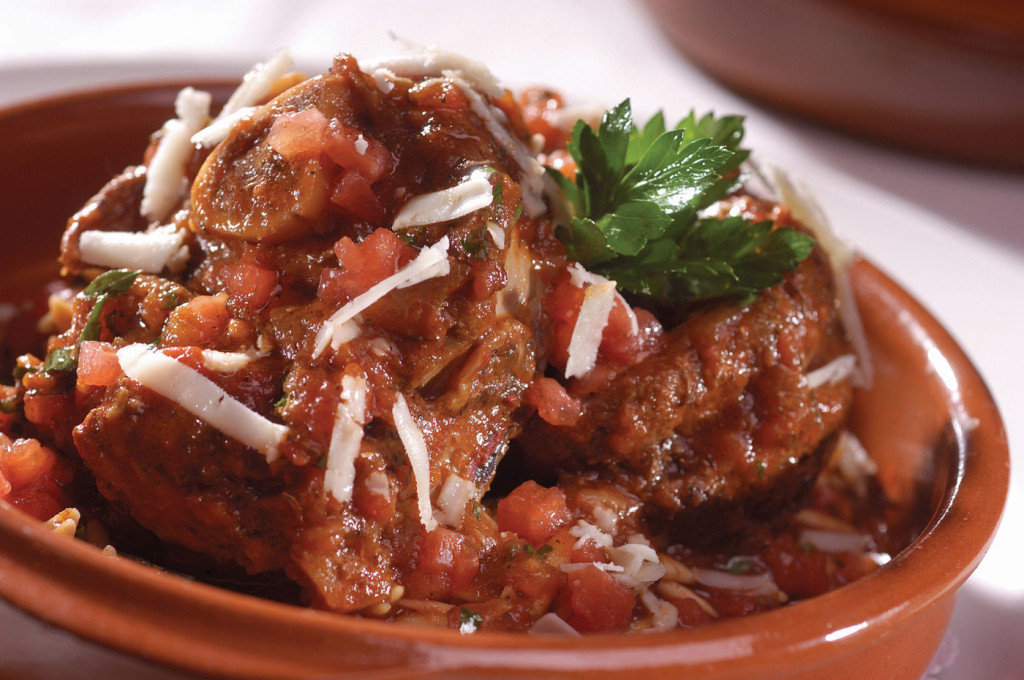 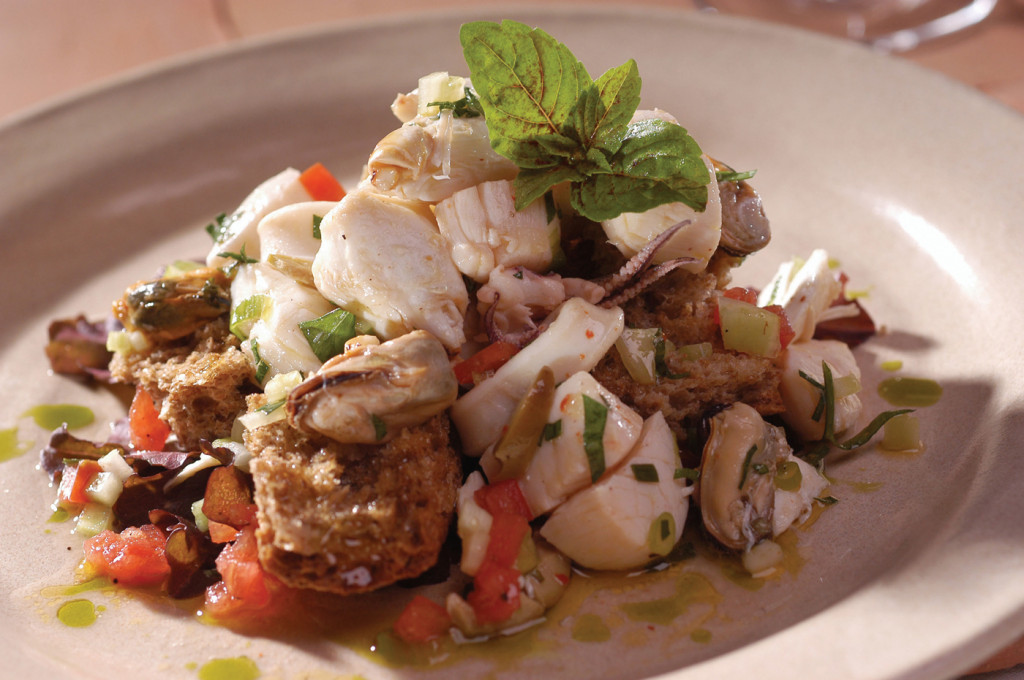 Following the crowning is the reading of two designated scriptures. The first is the Epistle of St. Paul to the Ephesians, which emphasizes the union of the couple into one being. “There are basic themes interwoven throughout every prayer recited,” says Father Stephanpoulos. “One such theme is mutual fulfillment, as seen in the reading, ‘Husbands should love their wives as their own bodies. He who loves his wife, loves himself.’

“The second reading is from the Gospel According to St. John,” says Father Stephanpoulos. “It recounts the wedding of Cana in Galilee, where the first miracle of the New Testament was performed and water was turned into wine.” Just as the wine was drunk in Galilee, the bride and groom take three sips each from the “common cup” of wine, symbolizing how from now on they will share everything in their lives.

The Dance of Isaiah, or “ceremonial walk,” follows the common cup. The bride and groom take their first steps as a married couple, walking around the matrimonial altar three times. As they walk, three hymns of praise are sung, asking blessings “to grant you length of days, fair children, progress in life and faith.”

Then a final blessing is bestowed, the ceremonial crowns are removed, and the dismissal prayer is read.

The Greek wedding ceremony is very formal, but the receptions are boisterous. Today’s receptions lead with the couple dancing to a waltz or perhaps a tango. Then the immediate family joins a line dance called “The Bride’s Dance” or  the “Kalamatiano,” which is led by the bride.

Another traditional dance is the “Sirtaki,” where everyone holds hands and dances in a large moving circle. The dance can last quite a while and be repeated several times throughout the evening.

“Mainland Greece and its various islands have different customs celebrating the newlywed couple at the reception,” Anna and George tell us. “We are predominantly from Xios. The style of our wedding music and dance is unique to our island. We have the traditional circle dances, ‘Tsifteteli’ and ‘Zembeikiko,’ but we also have the famous ‘Sirto,’ which is a dance between couples.

“In our tradition, when the newlywed couple dances, family and friends throw money on them to signify good fortune and prosperity. The guests also take turns leading the bride and the groom in the circle dances, starting from the immediate family and filtering down to friends. 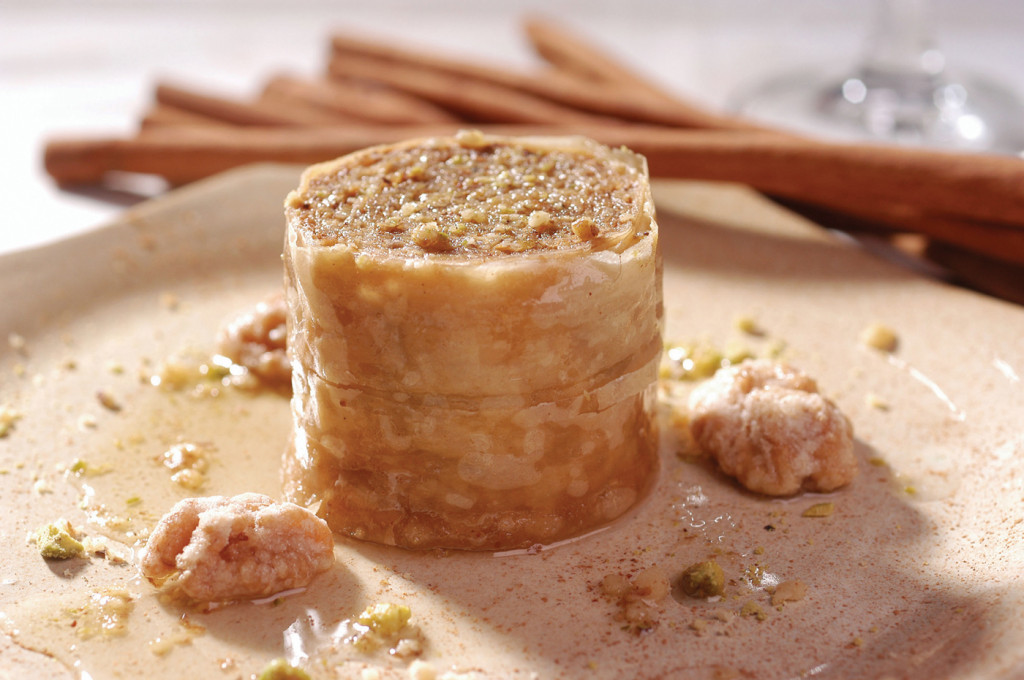 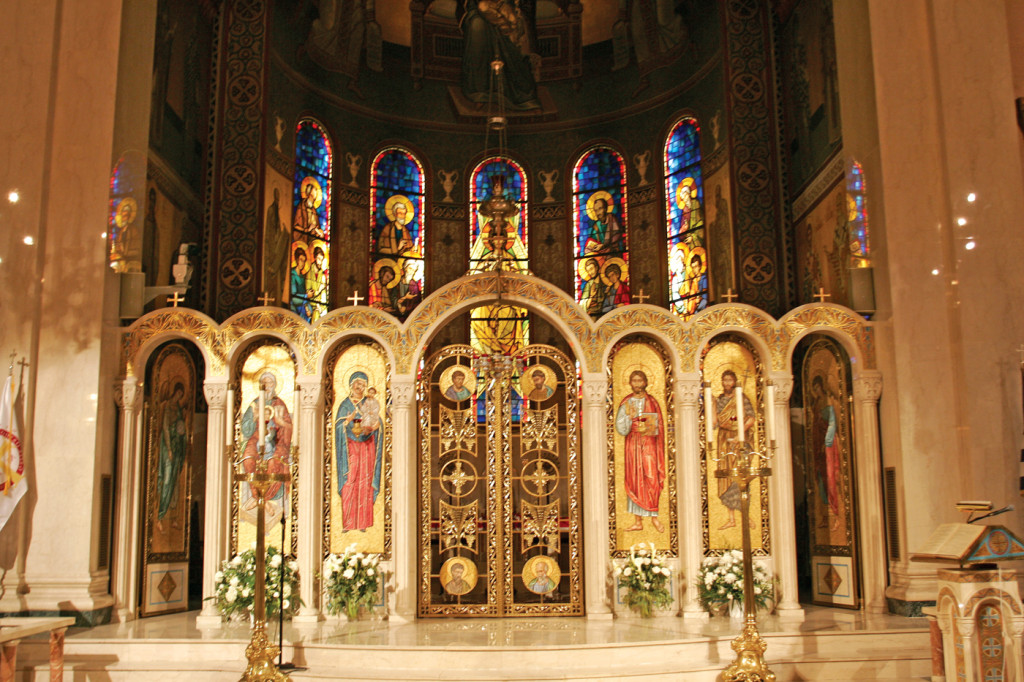 “Also, before dinner, the priest performs his blessing to the couple. Historically, Greek weddings used to last all night through sunrise.”

The “Money Dance” also is traditional in many regions of Greece. “In some regions, money is pinned directly to the bride’s gown throughout the evening.” At Anna and George’s wedding, following their tradition, it was thrown on the floor as they danced.

“At some weddings there is so much money on the floor,” says Theodore of Ariston Flowers, “that you need a broom to sweep it up. That is a sight to see!”

A tradition no longer found at the Greek Orthodox reception is the “Breaking of the Plates.” It once implied abundance, to symbolize good luck and happiness. But now most regions of Greece officially discourage the act as dangerous and now it’s also considered to be in very bad taste.

Along with music and dance at the reception are the champagne, wine, and the Greek national drink, Ouzo. Produced only in Greece, Ouzo gains its licorice-like flavor from the herb anise. Another ethnic drink, Tsoumada, is produced from almonds.

Special dishes include traditional bread salad, a summer treat in Greece. It’s a unique seafood salad with tender fresh sea scallops, lump crab, calamari, and mussels, marinated in lemon and olive oil and served over a barley rusk to soak up the flavor of the juices.

Lamb yuvetsi is a savory dish of lamb, braised and marinated in clay pots with orzo and tomato, and topped with kefalotyri cheese.

“In our tradition,” says Anna, “there is an exorbitant amount of food and drink, such as  whole lamb, goat, pig, and fresh fish. For drinks, we may have Ouzo, the official drink of Greece; Metaxa, Greek cognac; and Mastic liquor. If you are from the island of Xios, you also have Retsina, a wine made from pine resin, which is another popular drink.

“And of course there is strong Greek coffee for dessert, as well as baklava, which is is prepared with many layers of paper-thin filo dough, honey, walnuts, and pistachios rolled within.

“We also cut the cake and may even toss the bouquet, but these are traditions from America.”

The Power of Enduring Ritual

The roots of Western civilization are grounded in Greece, and the strength of Greek Orthodox rituals remains compelling.

“There was so much symbolism and ritual in our ceremony,” says one recently married Greek bride. “Everything meant something. After the crowning, you and your husband are coming into this whole new world together, and it really is an amazing experience.”