You are at:Home»Insights»Traditions | The Irish Wedding 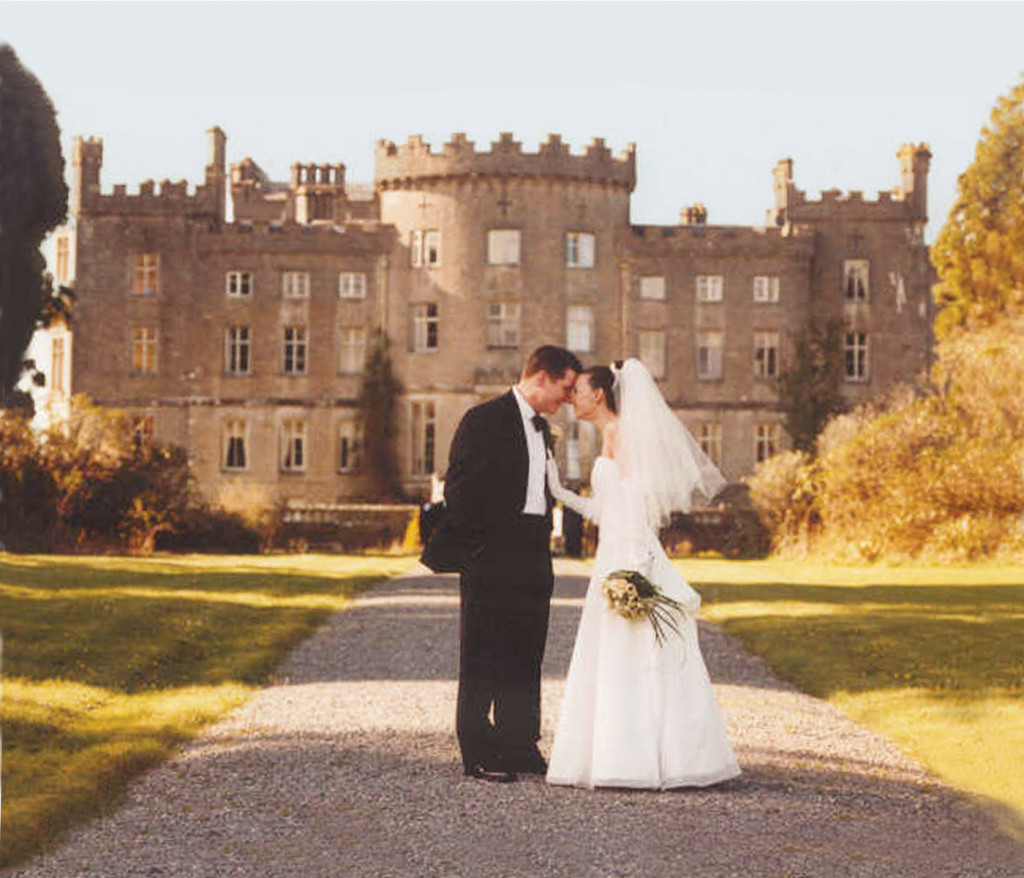 “Thomas & Christina are both Irish and share fun-loving, fiesty personalities,” says Sarah Pease of Brilliant Event Planning. “When I found them a reception site with its own Irish Pub complete with a mahogany bar, they knew they had found their perfect venue.”

Sarah arranged for an Irish vocalist to sing a beautiful Old World hymn for the prelude, and the bride and groom chose a touching Irish blessing to be recited during the ceremony.

“May your troubles grow few as your blessings increase,

“May your hands be forever clasped in friendship and your hearts joined forever in love.”

As part of the dinner menu, Sarah worked with the caterer to serve a specialty item of Guinness-braised beef and garlic mashed potatoes as an entrée choice, “to really get in touch with Irish cuisine.”

A lone piper in full costume (“It’s not just a Scottish tradition!”) announced the arrival of the new Mr. & Mrs. into the reception. “Baby Guinness shots, made from Kahlua and Bailey’s Irish Cream, were passed during the cocktail hour, and in lieu of traditional coffee service, guests enjoyed authentic Irish coffee.” Another extremely popular dessert item was the Bailey’s Irish Cream cheesecake.

The Luck of the Irish

“There is an Irish phrase, ‘Marry in May and rue the day, marry in April and joy for maiden and man.’ This saying makes May the most unlikely month for the Irish to marry,” says Sarah. “The luckiest days to get married, according to legend, are Christmas Day and New Years Eve.”

According to legend, in a leap year, February 29th is the only day that a woman can propose to a man. “When  England ruled Ireland, the law didn’t observe Leap Year. As a result, all norms were ignored as well, including the one that says men are the ones who can pop the question.”

As favors at Thomas and Christina’s wedding, Sarah and her team had satchels filled with shamrock seeds and a traditional Irish poem. “Gifts for the bridal party were stainless steel bottle stoppers topped with a shamrock.”

A horseshoe, always pointing up, is also a customary good luck gift for an Irish bride. “It can be incorporated into the wedding as an adornment for the cake,” says Sarah, “or in a more modern way as a charm on the bride’s bouquet, as a necklace, or stitched into the inside of her wedding gown.”

“In the old days, a bride would carry a real horseshoe down the aisle!” says Bridget Haggerty, author of ‘The Traditional Irish Wedding.’ “But that’s considered kind of heavy and cumbersome these days.” Today, you can get a horseshoe in porcelain or fabric, which can be worn on the right wrist. “The points have to stay up, so the luck won’t run out. That’s very important.” 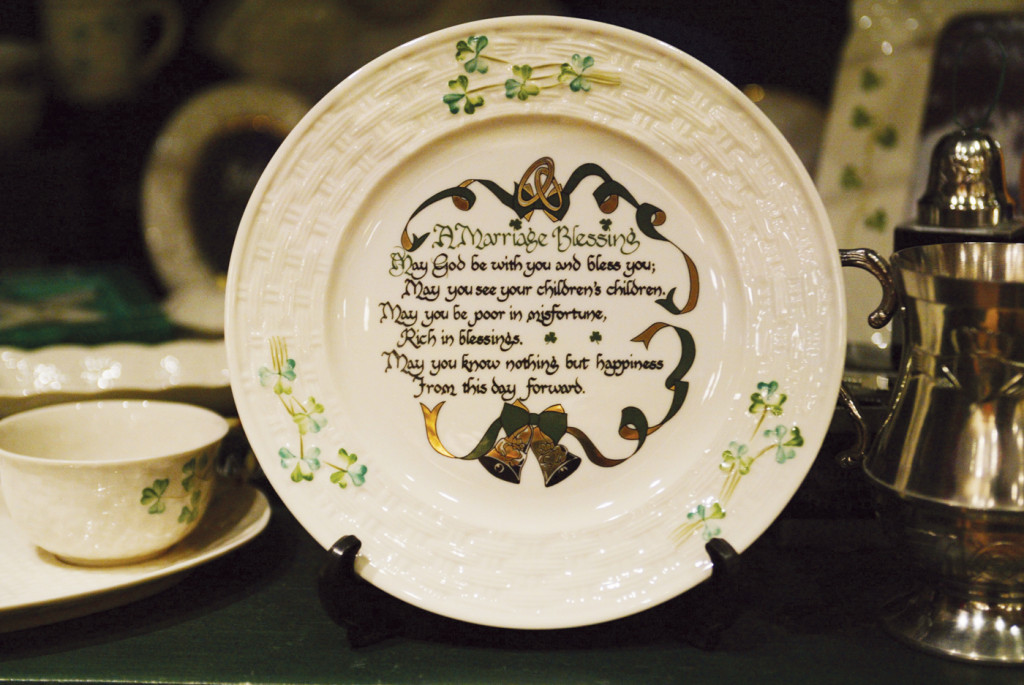 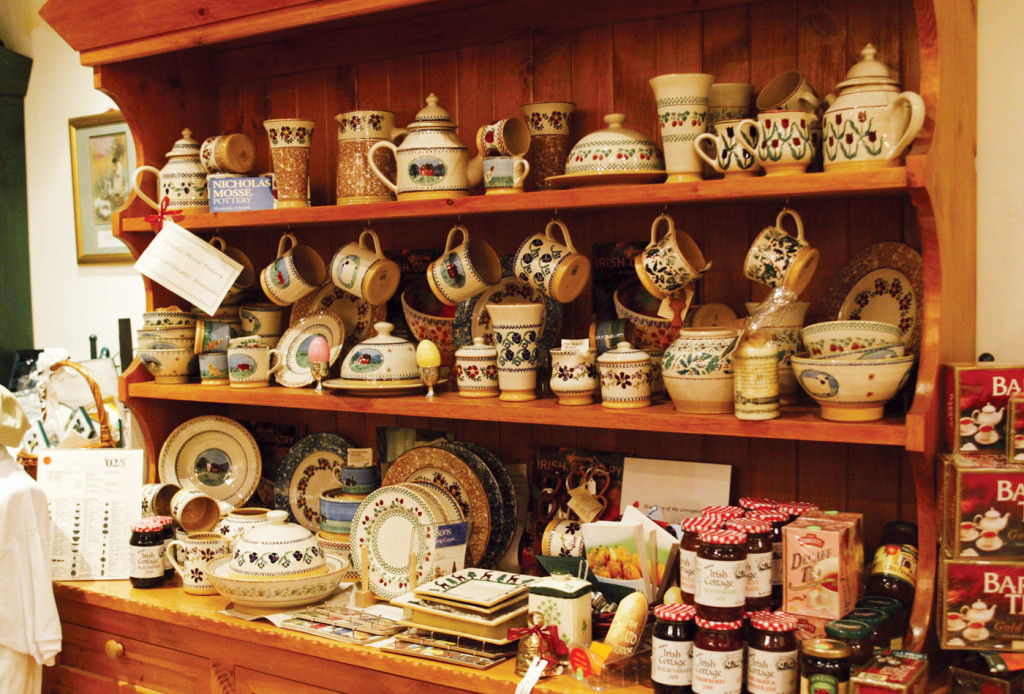 The couple also is typically given a gift of a bell, meant to maintain harmony between them. “Often the bells will come attached to the horseshoe,” says Sarah.

“The Irish Claddagh is another symbol you can weave throughout your wedding,” adds Bridget, “ from your invitations to favors to cake decorations.”

Consisting of a heart, a crown, and two hands, the symbol stands for love, loyalty, and friendship. The hands are there for friendship, the heart for love, and the crown symbolizes loyalty.

Now also popular beyond the borders of Ireland, the symbol originally evolved from several centuries-old stories.

One of the most popular stories starts with a fisherman named Richard Joyce, who lived in the village of Claddagh. “He was engaged, but just a week before the wedding,” says Bridget, “he was kidnapped and sold into slavery in North Africa where he learned the art of goldsmithing. He made a ring for his fiancée with the now famous symbol. When he finally secured his freedom and returned to Ireland, he found her. She had never married, they were wed, and it was a happy ending.”

The symbol later became popular on the West coast of Ireland, where the Claddagh ring was handed down from mother to daughter.

“Most Irish brides also will have a shamrock somewhere in their wedding,” says Bridget, “and if you can get the real thing, it’s nice to put it in your bouquet.” According to legend, St. Patrick used the three-leafed clover to teach pagan Irish people about the Holy Trinity. Now the national emblem of Ireland, it’s also believed to bring good luck. 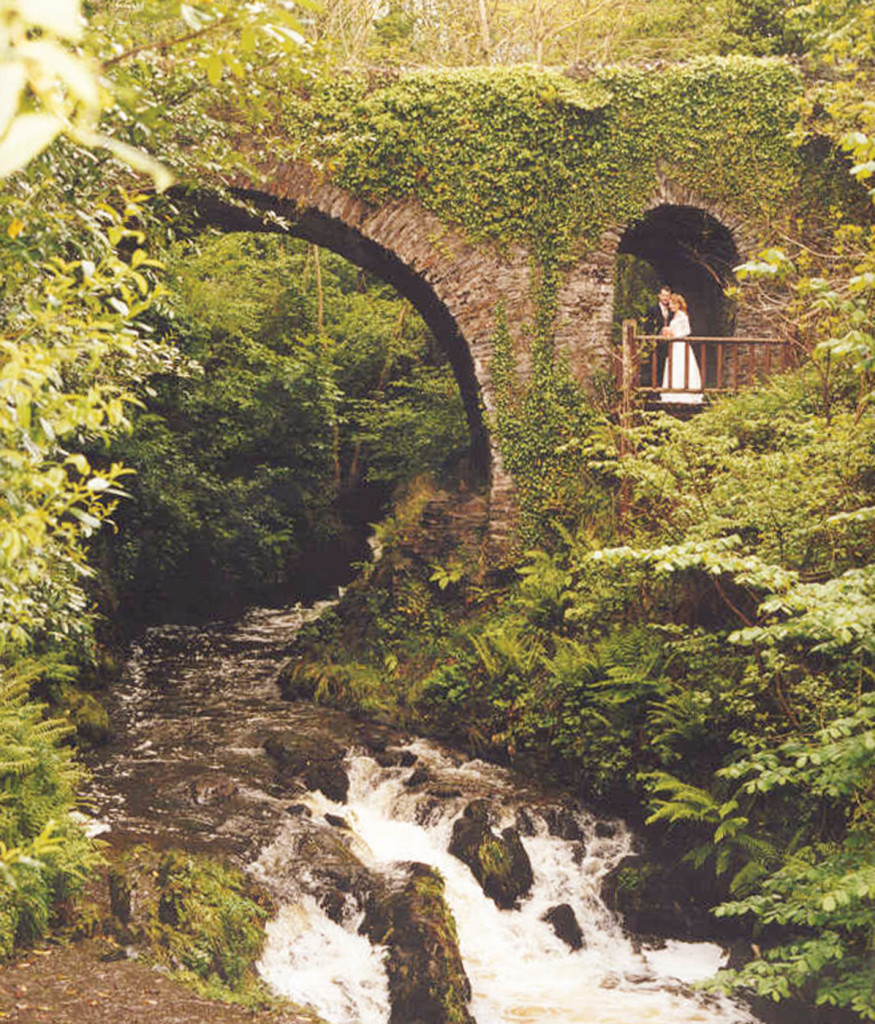 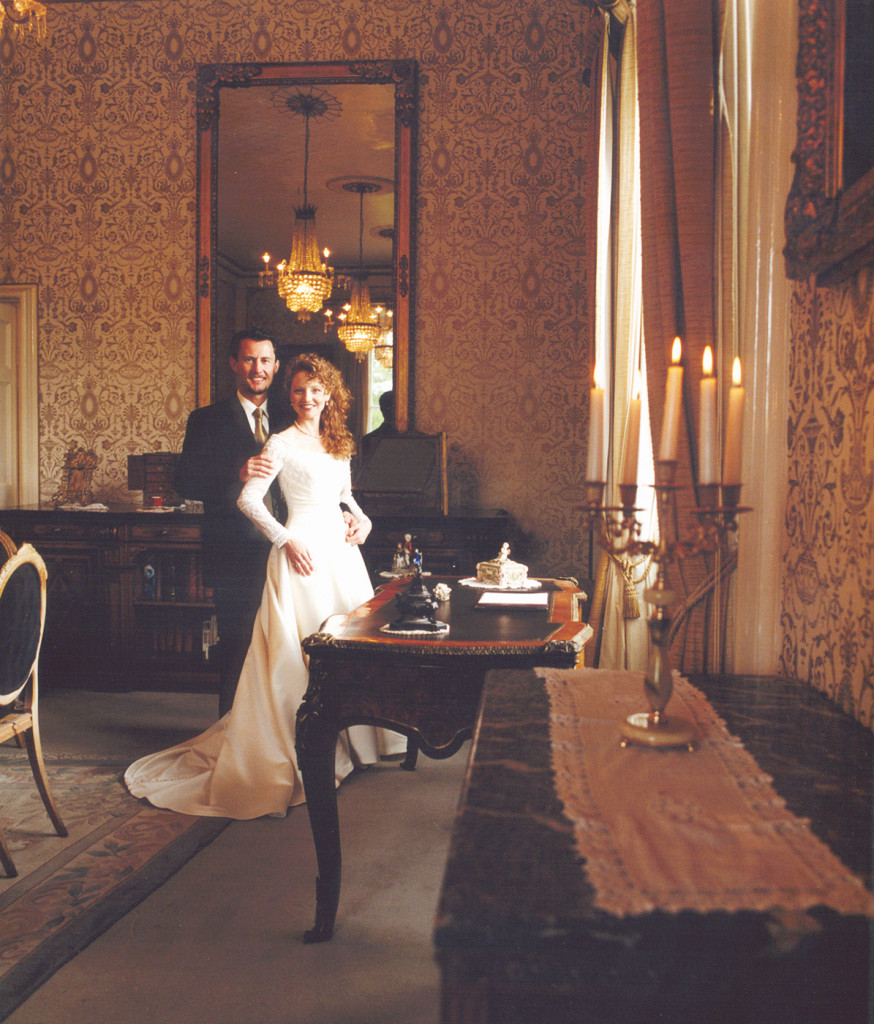 A Church Ceremony, A Special Breakfast

By the twelfth-century many of the old Druidic and pagan rituals began to disappear. “As Christianity took hold in Ireland, marriages no longer took place inside the family home,” says Bridget. “They were brought inside the church and were seen as a sacrament between two people and God.

“If you’re going to be married in a Catholic church, it’s nice to find a Gaelic Mass.” Though many Catholic churches will not allow non-secular music, if your priest is lenient, Bridget suggests selecting Irish music for the prelude, ceremony, and processional.

Also, because of the strong religious influence, “Irish wedding receptions will typically have a full speech from the priest,” adds Sarah. “He often has known the bride or groom since they were young.”

There is a strong religious following in Ireland, so many ceremonies still follow traditional Catholic or Protestant customs. “But since 2007, couples can be married outside a church,” says Sarah, “though getting married in a private home, park, or other non-traditional location must be pre-approved.

“In addition to exchanging rings just as American couples do,” continues Sarah, “in some areas they also exchange a gold coin and repeat the phrase, “This I give you as a token of all of my worldly goods.”

“A true Irish wedding cake is a fruitcake, and today many couples will have the top layer made from fruitcake but the rest will be a different flavor. “Unlike American wedding tradition,” says Sarah, “the top layer is kept until the baptism of their first child, not for their first anniversary.”

Another custom is to serve a full Irish breakfast at the end of the wedding, including fried eggs, beans, sliced tomatos, potatoes, toast, and rashers, which are similar to Canadian bacon, and both white and black pudding. “Non-Irish guests should beware that black pudding is actually sausage made with pig’s blood!” cautions Sarah. 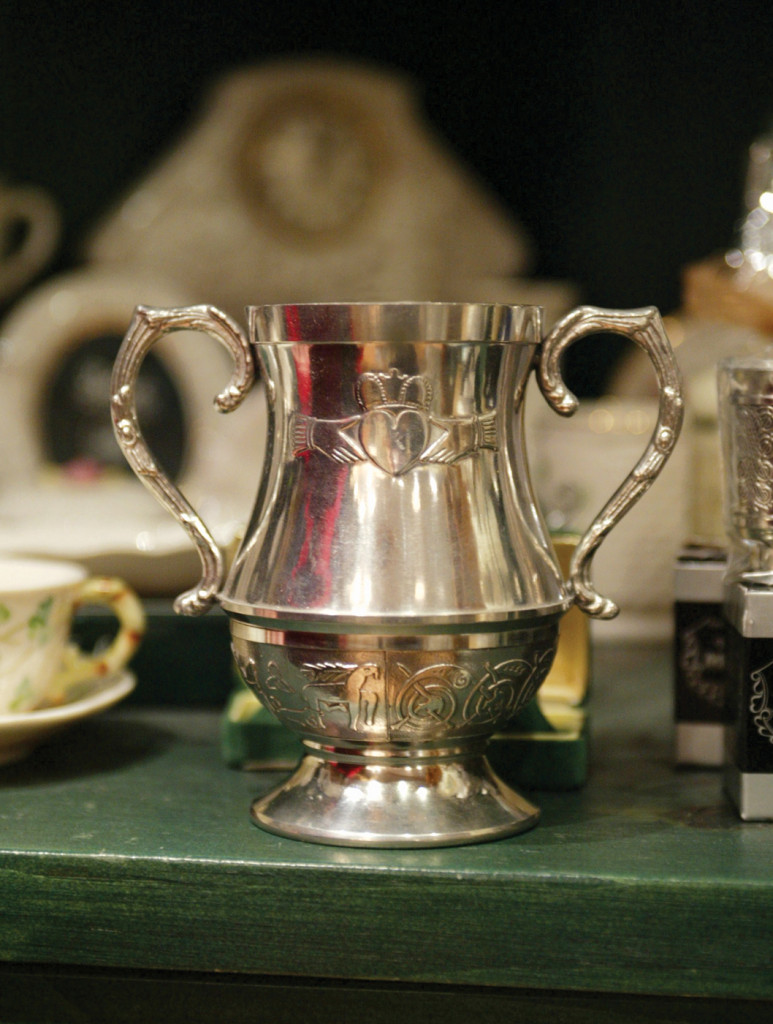 The Claddagh, with its heart, hands, and crown, and shown here on a silver chalice, symbolizes love, friendship, and loyalty. Irish blessings decorate many items. 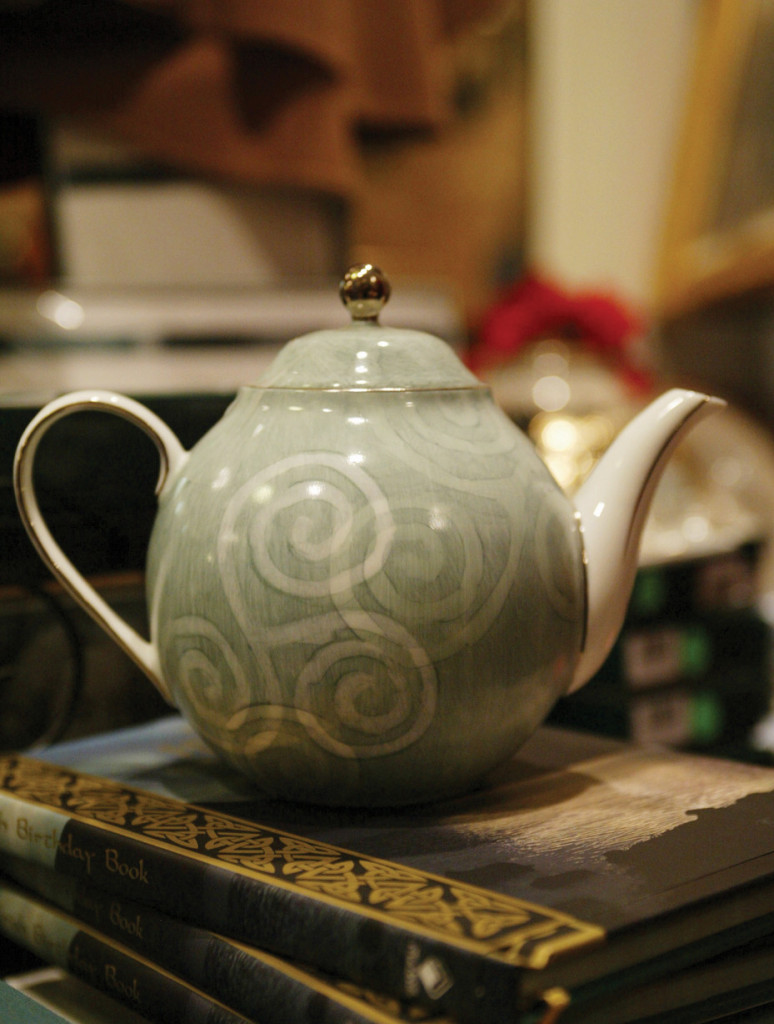 A porcelain teapot with Irish symbols

Embroidery adds a touch of tradition, and many brides like Celtic knotwork on their gowns. “Royalty in old Ireland also wore a lot of jewelry,” says Bridget, “and Irish tiaras are now very popular.” You might consider a Tara brooch, designed after those found centuries ago in the old Kings of Tara collection. “The brooch is round with stones around the outside, and a sword goes right through the middle. At my daughter’s wedding we gave one to each of the bridesmaids and they used them to pin sashes at the shoulder of their gowns.”

For reception music, many Irish weddings feature a traditional live Irish band for the first part of the evening. “Guests typically do a traditional Irish dance such as ‘Siege of Ennis’ or ‘Walls of Limerick’ where everyone joins in and takes over the entire dance floor,” says Sarah.

For your ceremony, Bridget also suggests considering old Irish harp music. “It’s very lyrical and romantic. For the reception, anything goes, from traditional reels and jigs to contemporary groups like U2 or Enya.” At her daughter’s wedding they played ‘The Irish Wedding Song’ during the cake cutting.

You may also want to consider hiring traditional Irish step dancers to entertain your guests during the dinner hour. “We hired eight dancers who came in full costume. They did both a hard-shoe and soft-shoe performance.”

Many traditional Irish venues set the tone for a fairytale wedding with a historical or natural setting. “Country manors have old dining rooms with fireplaces, as well as old-fashioned library rooms, bars, and cellars,” says Karen Dodson of Wed In Ireland, a wedding coordination service helping couples from abroad plan weddings in Ireland.

“You get the feeling of the old-world, yet at the same time you have five-star accommodations with modern comforts.” Wed In Ireland also helps couples plan weddings in majestic castles, abbeys, and hotels all over the country.

Some Irish brides who want a local wedding have nonetheless been inspired by the majestic castles of Ireland, and have decided to take advantage of the wide variety of local venues here in hte area.

They have recreated Irish traditon and ambiance at the local castles and manors right here in New York, New Jersey, and Long Island, bringing the “Luck o’ the Irish” to our own shores.