You are at:Home»Insights»Traditions | The Italian Wedding 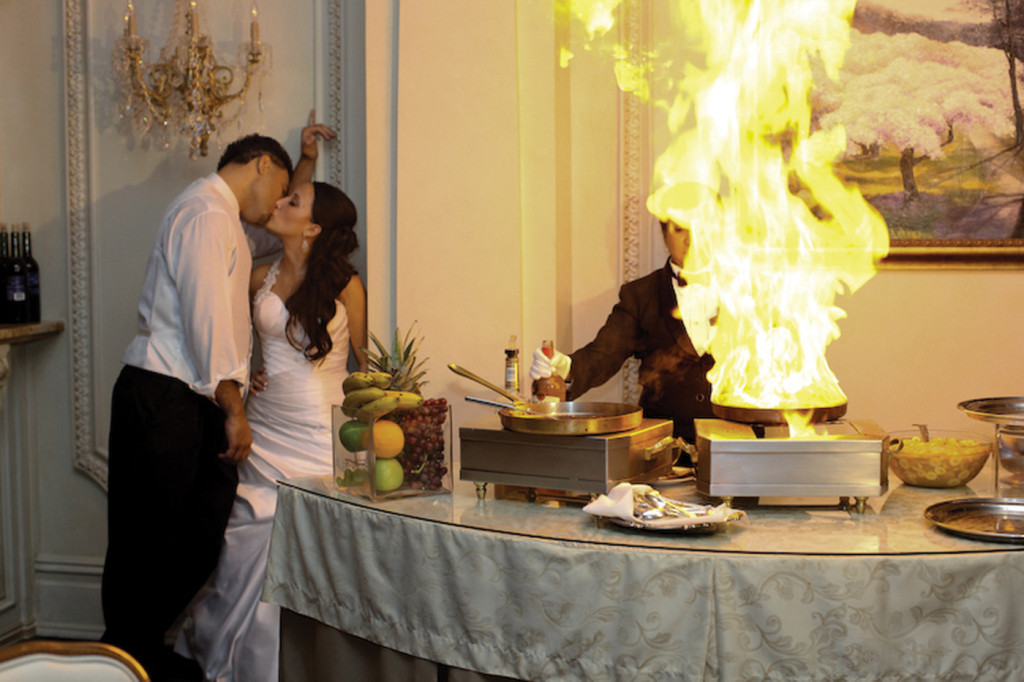 Whether or not your ancestors hail from the land of Armani, Prada, and Fellini, look to the birthplace of exquisite art, fashion, and cuisine to add a unique sense of meaning to your special day.

A Touch of Lace

“Italy is one of the birthplaces of lacemaking,” says legendary fashion designer Oleg Cassini. “Lace is a very traditional and beautiful fabric for an Italian-themed wedding. Venetian lace is not only gorgeous, but also world-famous.”

A number of special lace gowns in the new Oleg Cassini Collection are Italian-influenced, and the designer has perfected these gowns for decades on a world stage. “When Jackie Kennedy was planning her trip to Italy,” says Cassini, who was the First Lady’s personal couturier, “I designed a simple long black silk gown that resembled a wedding gown, and I accessorized it with a black lace mantilla.”

Among the other Italian lace designs he created was an all-lace gown for Jackie, with a Veronese green silk cummerbund. “The dress had the perfect look for a garden wedding. I particularly like lace for wedding gowns.”

He reminds us that many Italian traditions have been incorporated into American weddings. “The phrase ‘Tie The Knot,’ for example, comes from the time when a large bow was placed across the doorway of the church,” says Cassini, who designed a ‘Tie The Knot’ gown with a bow at the back to symbolize the ritual.

To make a direct connection with Italy, Cassini also suggests contacting the Pope. “The Papal blessing for a wedding can be easily obtained by Americans with or without an Italian background,” says Cassini. A typical message from the Vatican might read, “The Holy Father Paternally imparts his Apostolic Blessing as a pledge of heavenly favors to…”

Born a count, Cassini studied in Florence and later opened his own boutique in Rome. Later, he designed for Hollywood, where he dressed major film stars, including Grace Kelly. He went on to dress First Lady Jackie Kennedy and also opened his own fashion house on Seventh Avenue in New York.

“Another tradition from Italy is the throwing of confetti, which represents money and good fortune. That is why it is showered on the newlywed couple as they leave the church ceremony and walk toward the town piazza. A blessing, a beautiful gown, and a day surrounded by friends and family can add a special touch to your wedding.” 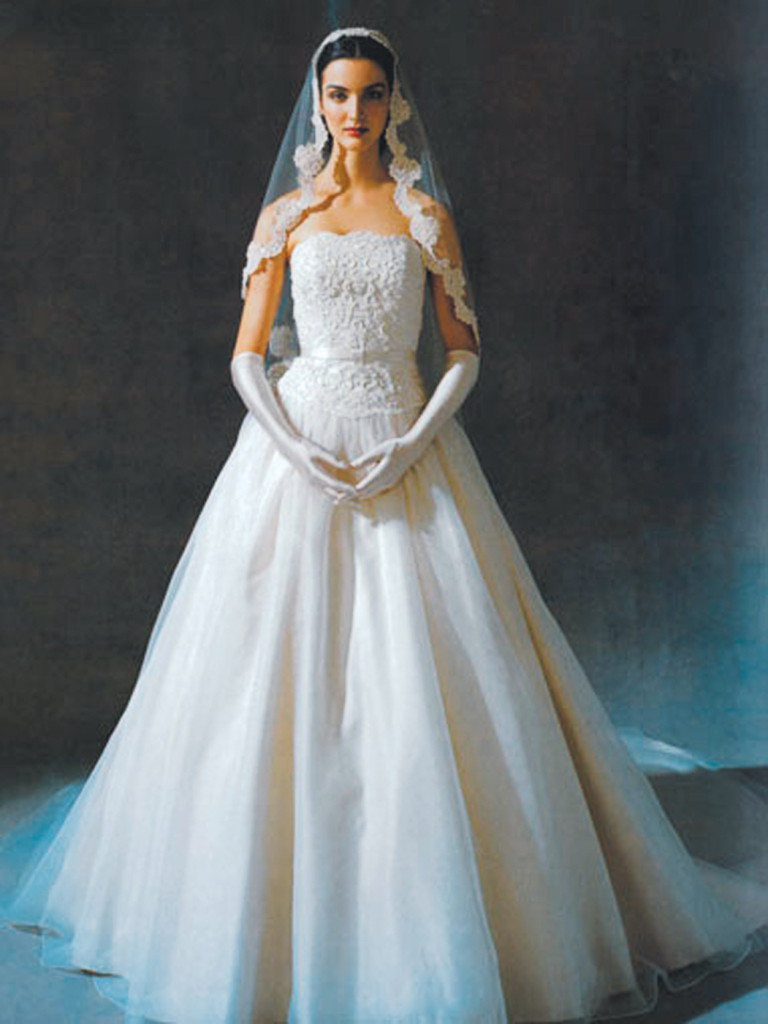 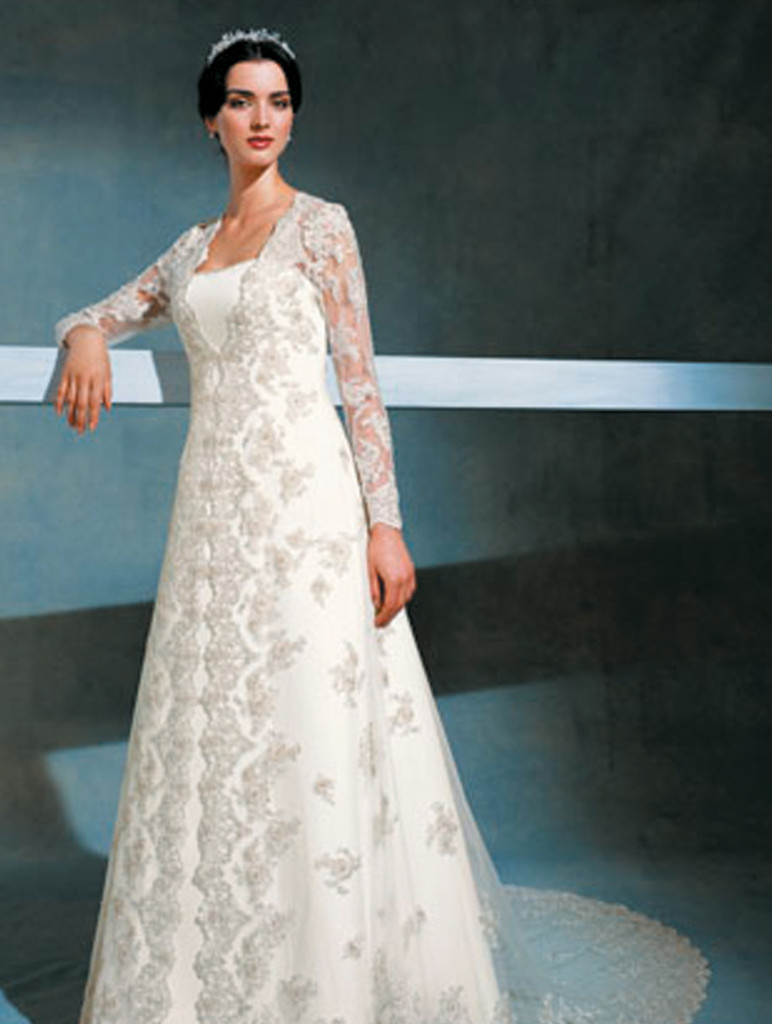 According to Roman tradition, the circular shape of the ring represents never-ending love. It’s worn on the fourth finger of the left hand because they believed the vein in that finger runs directly to the heart. The ancient Romans also used precious stones as well as silver and gold in their rings.

The kiss between the bride and groom at the end of the ceremony held great importance in ancient Rome. Symbolizing the commitment and love of the wedding couple, for the ancient Romans, the kiss was the legal bond that sealed the marriage contract.

The final act of the ceremony in ancient Rome was the couple “breaking bread” together. It was sometimes described as cake, and the couple would feed it to each other, to symbolize their commitment to the relationship, just as brides and grooms today feed each other wedding cake.

An always festive way to add an Italian touch to your wedding is in your selection of foods. “For the cocktail hour, you might have shrimp scampi, sausage with broccoli rabe, fried calamari, and eggplant rollatini,” says Gregorio Polimeni Jr. of il Tulipano. “These traditional Italian dishes are very popular.” Gregorio suggests also considering chafing dishes with seafood, such as scallops or soft-shell crabs in oil, garlic, and lemon sauce.

Italian pasta dishes are endless. “We do a Southern Italian dish with chickpeas, mussels, broccoli rabe, orichietti, and oil and garlic. Penne à la rustica is made with a tomato and basil sauce with fontina cheese and roasted eggplant. A simple pomodoro is very refreshing, especially in the summer with New Jersey tomatoes. Amatriciana is a dish we make with onions, tomato, and basil in the sauce, plus our own homemade pancetta, which we cure here.”

For the main course, people stick with traditional fare. “Most of our weddings do a nice eight-ounce filet mignon, grilled and served with a Barolo wine sauce.” They also offer rack of lamb, braised short ribs, and other meat dishes, plus everything from chicken Francaise to chicken Forestiere. “We also have chicken Margherita, which is our recipe, topped with artichoke hearts, fresh tomato, and mozzarella.”

Fish dishes offer a great opportunity to add an Italian touch. “Many sauces can go with fish. Al modo nostro, which means ‘our way’ in Italian, is a tomato sauce with white wine, herbs, and olives. We can also bake the fish oregenata style, with garlic bread crumbs. We often serve tilapia or halibut, and bake it with a touch of white wine and lemon. We can do a salmon Beurre Blanc, white wine, and butter sauce, or a mustard dill sauce.” 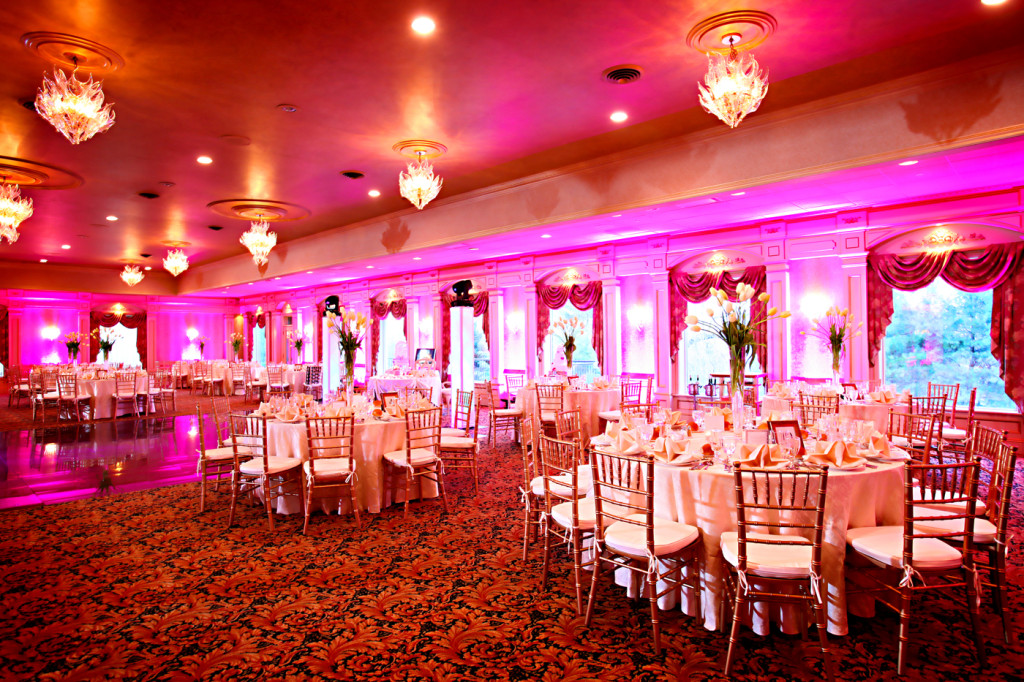 Italian desserts include traditional cannolis, Napoleons, and zeppoles. “We also have our own homemade gelato and sorbet too.” They also offer chocolate fountains, international coffee bars, ricotta cheesecakes, Godiva cakes, traditional cookies, biscotti, pignoli, even chocolate-chip and oatmeal raisin cookies. “It’s a diverse selection but we can keep it predominantly Italian,” says Gregorio, who notes that traditional drinks might include sambucca, Frangelico, cognac, grappa, port, plus red and white wine with dinner.

A recent wedding at il Tulipano had 280 guests, including 30 who had flown in from Italy and only spoke Italian. “I am fluent in Italian so I personally oversaw them,” says Gregorio. “Some were from my family’s hometown or had family there!”

Gregorio’s father bought the property in 1982 and the young Gregorio began showing up when he was 12. “I worked as a dishwasher, a busboy, a waiter, a bartender, a cook, and even parked cars.” Then he finally worked as a maitre d’ and went on to earn a business degree. “Now I am running the whole show, using what I learned from my father and being involved with everything every day.”

Orange blossoms were often featured in ancient Roman weddings. The fragrant white flowers are very delicate and the bride would wear them in her hair, place them in her bouquet, and include them among the decorations. Symbolizing purity and innocence, they also can be used as garnishes on food plates or on wedding cakes.

It was also common for a bride to carry a “la busta,” a traditional white satin purse where guests would put money all evening. The couple would also collect gifts from their guests by “cutting the necktie,” where the best man would cut the groom’s necktie into small pieces and sell them to the guests.

The best-known Italian dance is the “Tarantella,” a folk dance that originated in Southern Italy. Legend has it that the dance developed between the 15th and 17th centuries from tarantism, the disease caused by the spider’s venomous bite, which was so painful that it caused the victim to jump around as if he or she was dancing.

Other stories say the dance began as a courtship ritual. The dance starts with the man kneeling while his partner dances for him. Then he joins her in the dance, throughout which they repeatedly come together and then part, creating a true love story in motion.

A typical Italian wedding cake is usually alcohol-based,” says Adeline Lepore of Ferrara Bakery. “Rhum or strega liquor are used when making the cake. Typical Italian cakes are filled with custard creams, but a more modern Italian bride may choose a hazelnut cream.”

“Traditionally, a Southern Italian wedding cake is filled with cannoli cream,” adds Ernest Lepore. “These cakes will usually have a bride and groom on top. You can personalize your cake by choosing a unique bride and groom topper. In Northern Italy, the cakes are less decorative. You might find plain white icing and maybe some flowers on top.”

Italian sweets don’t stop with the cake. Pastries are also very popular. “Miniature pastries are usually served in addition to the wedding cake,” says Adeline. “Although it varies from region to region, you are likely to find a Viennese table of delicious desserts.”

Sweets are also given to the guests to take home. “In Italy there are stores that make a living selling wedding favors,” says Ernest. “Jordon almonds are usually given to every guest. The almonds come in many colors and sizes and are usually candy coated. They represent the bitter and sweet things in life, and are always given out in odd numbers for good luck.”

“The food served at an Italian wedding really depends on the region you are in,” says Nino Catuogno. “In Southern Italy, where there are over 15 different types of clams and two or three types of mussels, the wedding reception starts off with a lot of shellfish, from very large shrimps and oysters to mussels and clams.” After the appetizer, pasta is usually served, followed by meat or a little bit of fish. Then they go on to dessert.

“But in Northern Italy, there are as many kinds of prosciutto as there are clams in Southern Italy! They also serve salamis, cheeses, and dishes like roasted cold artichokes and prosciutto quiche.”

Nino and his wife Pam had their wedding reception at Bricco. “My wife is Greek, so we mixed her culture with my Southern Italian culture.” They had a large antipasto table, “and on one side displayed all the seafood you can imagine, while on the other side we did some Greek and Northern Italian dishes, like cold cuts and cheeses.”

Later they went upstairs and had a sit-down dinner. “We served a veal-filled ravioli and a vegetarian gnocchi with buttered sage sauce. After the gnocchi, we did a filet with a peppercorn sauce with vegetables.”

Then they served a salad. “That is a common Italian tradition. The salad helps you digest your food before the wedding cake is served.” After the salad, they served their wedding cake along with Greek pastry.

“Flowers bring happiness to people,” says Nino, “and we put flowers all over. We used mainly white flowers, because it’s a tradition in Italy, where churches are decorated with lots of white flowers, from the doors to the altar. There are tons of flowers at the reception too.”

For their music they mixed cultures once again. “For our first dance my wife and I danced to a French song we both love, ‘La Vie en Rose,’ by Edith Piaf. Then we played Italian, Greek, and American music.” 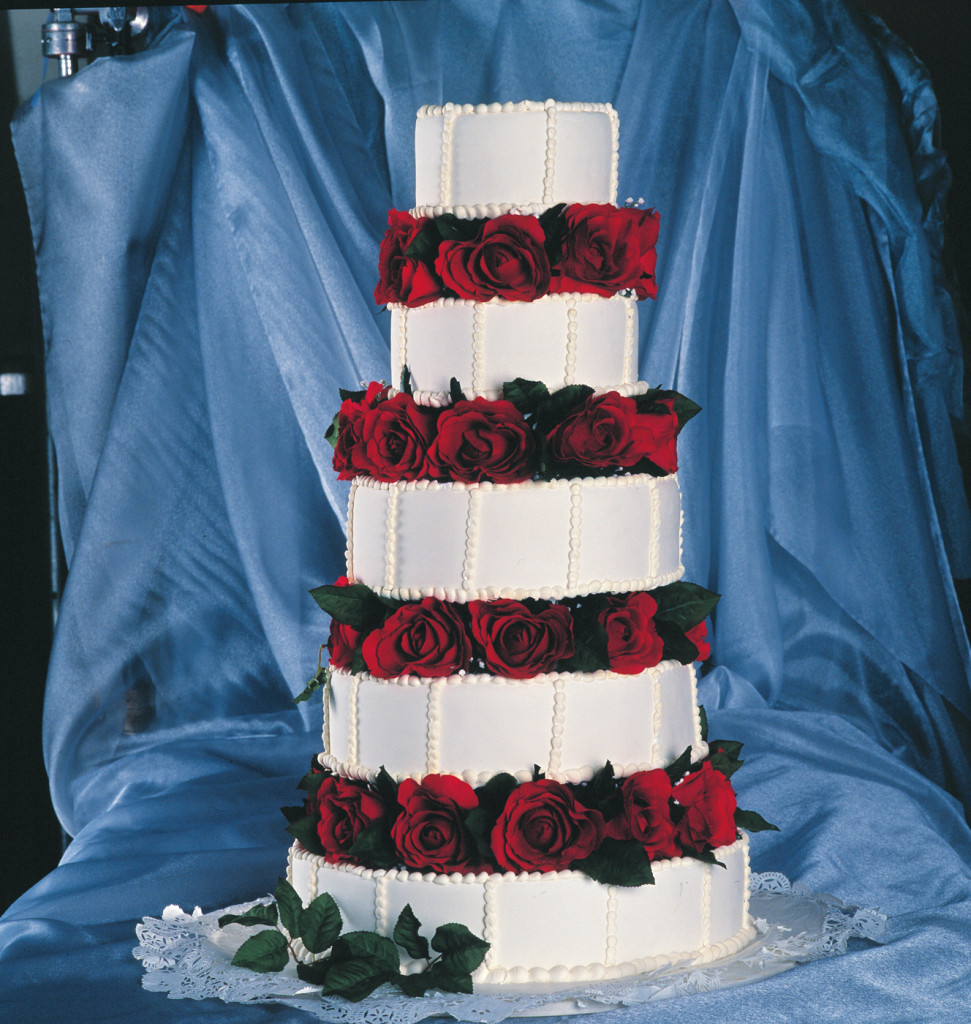 “Our wedding was great,” Nino says smiling. “But every event is unique. You can go to other weddings and pick up tips for your own. These tips don’t have to be from your own culture either.

“You can combine cultures to create a wonderful ambiance, and then rely on your own taste to select great food, elegant decorations, beautiful music, and colorful flowers. Then it really becomes your own unique wedding!”