You are at:Home»Insights»Traditions | The Japanese Wedding 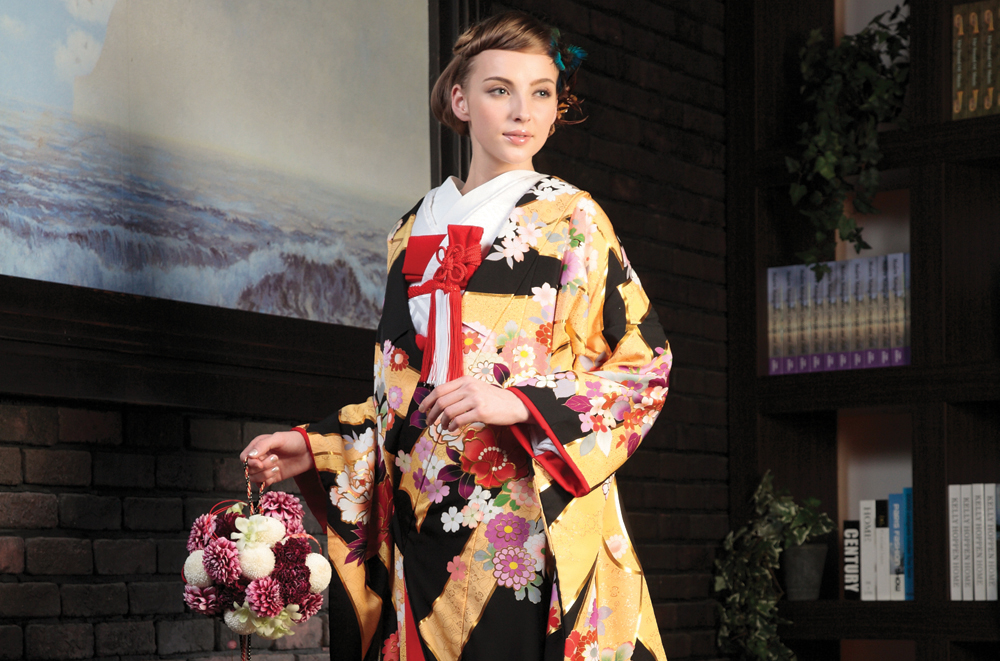 Uchikake. The bride typically wears a white kimono for the ceremony. For the reception, she often wears the uchikake, an elaborate silk robe covered with embroidered flowers and cranes, worn over a kimono.

The Japanese wedding ceremony joins two people and incorporates rituals that also join the two families. Many of these rituals, especially its unique sushi dishes, are popular at American weddings of all traditions.

In ancient times, Japanese weddings were celebrated around a low dining table with neighbors and relatives. Over the centuries, they started to hold weddings at shrines, hotels, and ceremony halls.

Today, the traditional Japanese ceremony is Shinto-style, performed by a Shinto priest and held at a shrine. The ceremony itself is very formal and usually very private, with only close family and a few guests present. 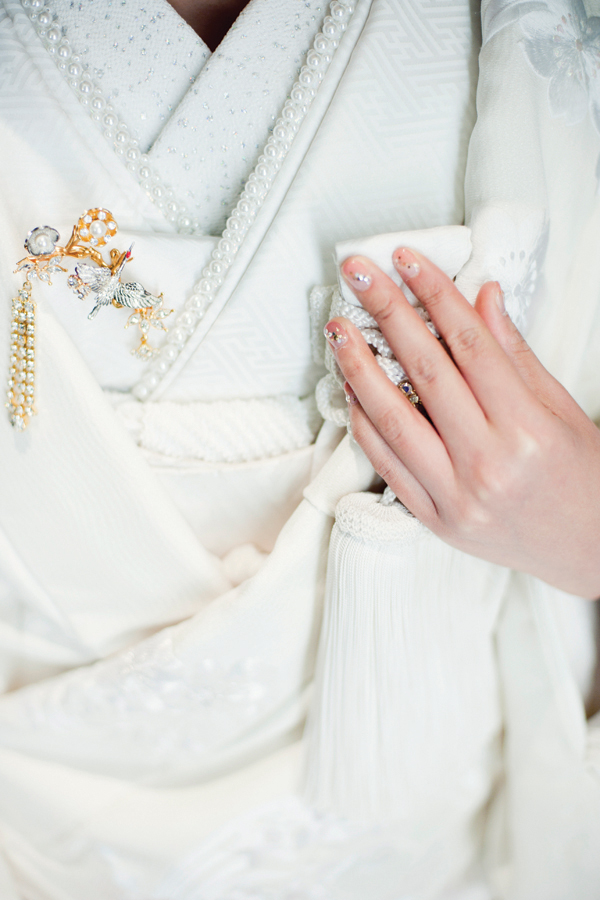 Shiro-muku.Brides who choose a Shinto-style wedding wear a white kimono, called shiro-muku. It symbolizes purity and that the bride will become the color of her husband's family. 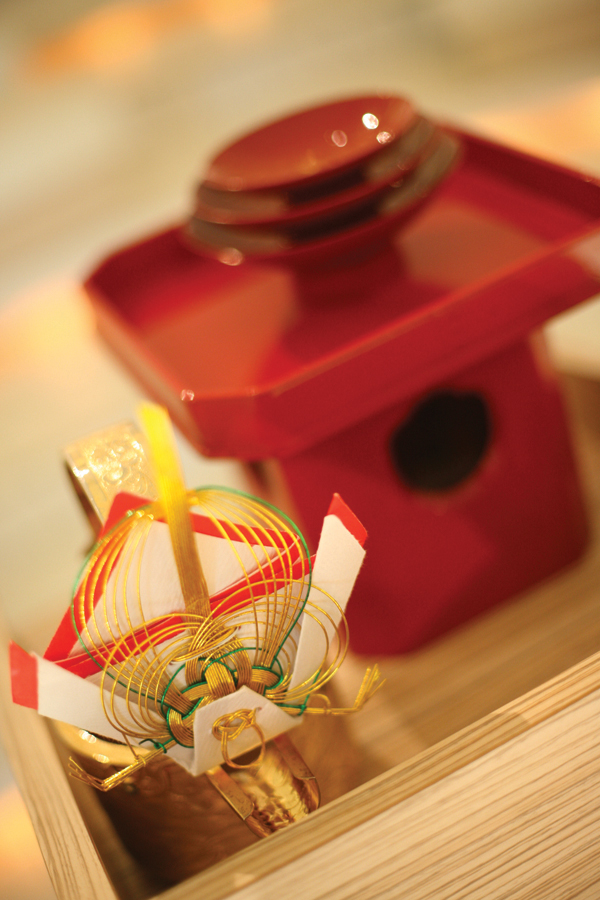 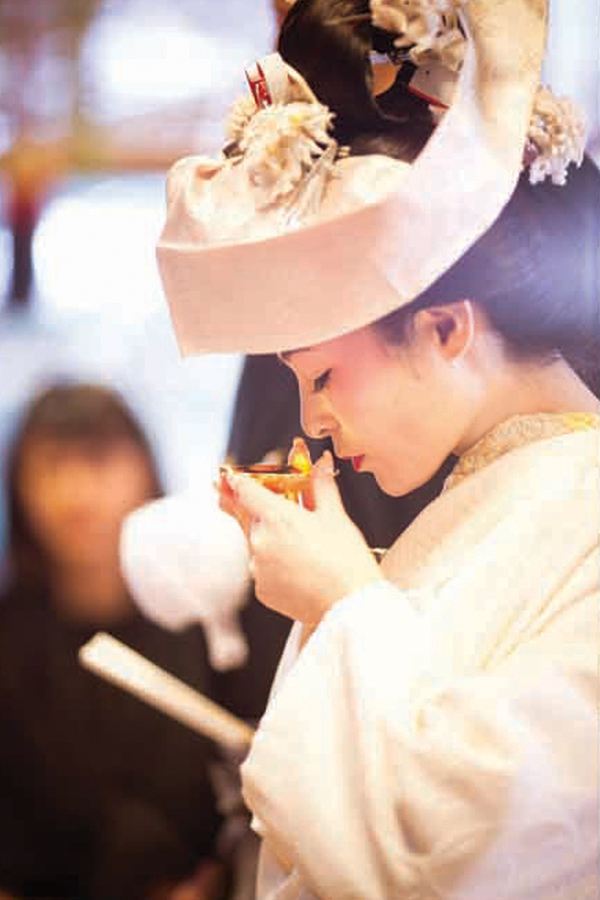 The most popular tradition during a Shinto-style wedding is the exchange of nuptial cups, which is called san san ku do. San means three and ku means nine. So san san ku do means three, three, and nine. The groom and bride drink sake three times each, from three different-sized sake cups called sakazuki. In their exchanging cups, they are symbolically exchanging their marriage vows.

Many ceremony locations have a room with a miniature Shinto shrine where couples can perform their marriage vows. First comes the ritual of purification, then the vows, then the bride and groom exchange sake in the san san ku do ceremony that unites them and their two families. The ceremony closes with symbolic offerings of small tree twigs, called sakaki, which are given to God.

The traditional wedding is becoming less popular. Now most weddings instead have a more Western style, with a procession down the aisle.

Centuries ago, when physical labor was so highly valued, the groom would live with the bride’s family and the groom would donate his labor for a period of time. This was called muko-iri. But by the 14th century, it was largely replaced by the custom of the woman instead marrying into the man’s family, called yome-iri. Marriages then were often arranged by the parents. As recently as 1970, more than 40 percent of Japanese marriages were arranged, but today that figure is less than 10 percent.

Bangasa. When the bride and groom enter into the shrine, they sometimes use this umbrella, made of a coarse oil-paper.

参殿  Palace Visit ... Admission to the private ceremony of the bride and groom.

修祓  Purification ... The exorcism of a person or place of evil spirits.

祝詞奏上 The recital of Shinto prayers, for happiness in the future and to thank God.

玉串奉奠 The offering of a branch of the sacred tree, the Sakaki, symbolized by a zigzag-shaped paper streamer used to adorn Shinto-related objects. 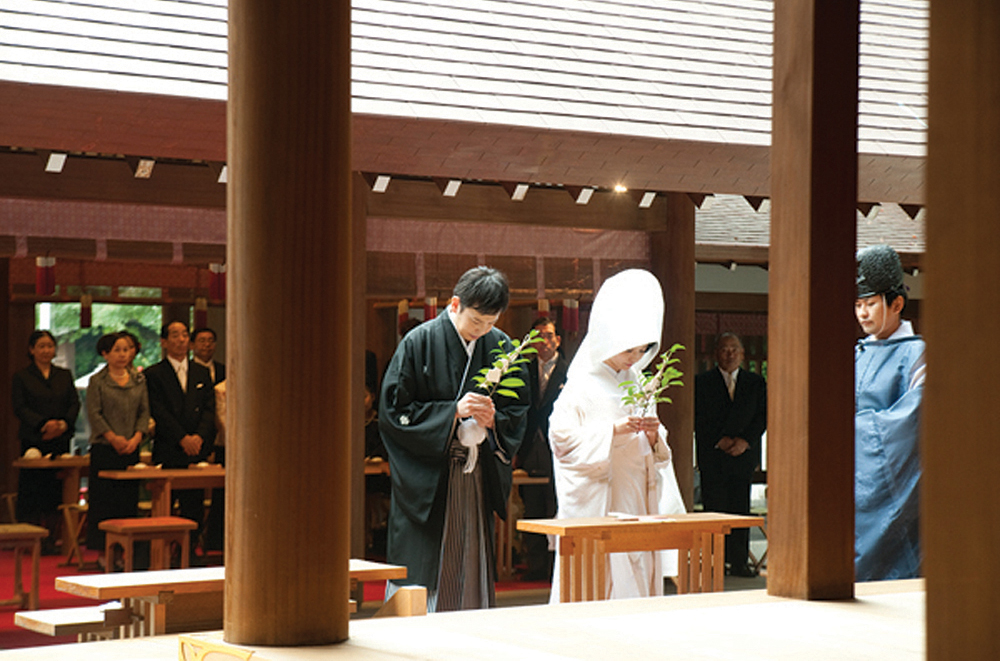 Tamagishi-houten. Reverentially offering a branch of the sacred tree, the Sukaki. 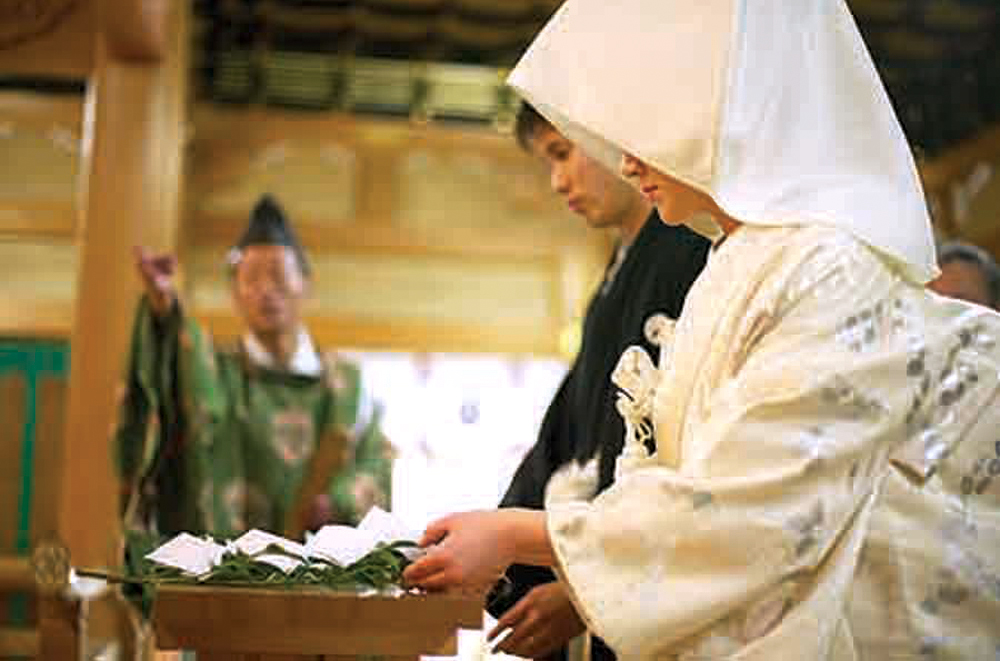 Japanese wedding rituals often incorporate items that have strong symbolic meaning. Because of its strength and simple elegance, for example, bamboo represents both prosperity and purity, while the mizuhiki knot given at Japanese weddings is often shaped like a crane, symbolizing prosperity and a long life. It is also traditional to fold 1,000 gold origami cranes. Since cranes mate for life, they stand for good fortune, longevity, and peace in the marriage.

Japanese wedding rituals start with the engagement, where the couple may exchange lucky objects. These can include Kinpo-zutsumi, a ceremonial amount of money; preserved foods such as Katsuobushi, or dried bonito,which symbolizes lasting quality; Suehiro, a fan which is a symbol of happiness; and Tomoshiraga, linen thread that signifies strong ties in the marriage.

Adopting some Western traditions, Japanese brides often have something “old, new, borrowed, and blue.” They toss the bouquet, have their friends throw rose petals, and they feed each other their first bite of cake.

Japanese wedding couples also acknowledge their parents during the reception, with a gift of flowers, a toast, or a personal letter of love and thanks.

Wedding favors given to guests might include chopsticks, folding fans, and sake cups. Wedding guests are expected to give money wrapped in small, beautifully decorated paper packets. This decoration is called mizuhiki.

Uchikake. The bride typically wears a white kimono for the ceremony. For the reception, she often wears the uchikake, an elaborate silk robe covered with embroidered flowers and cranes, worn over a kimono. 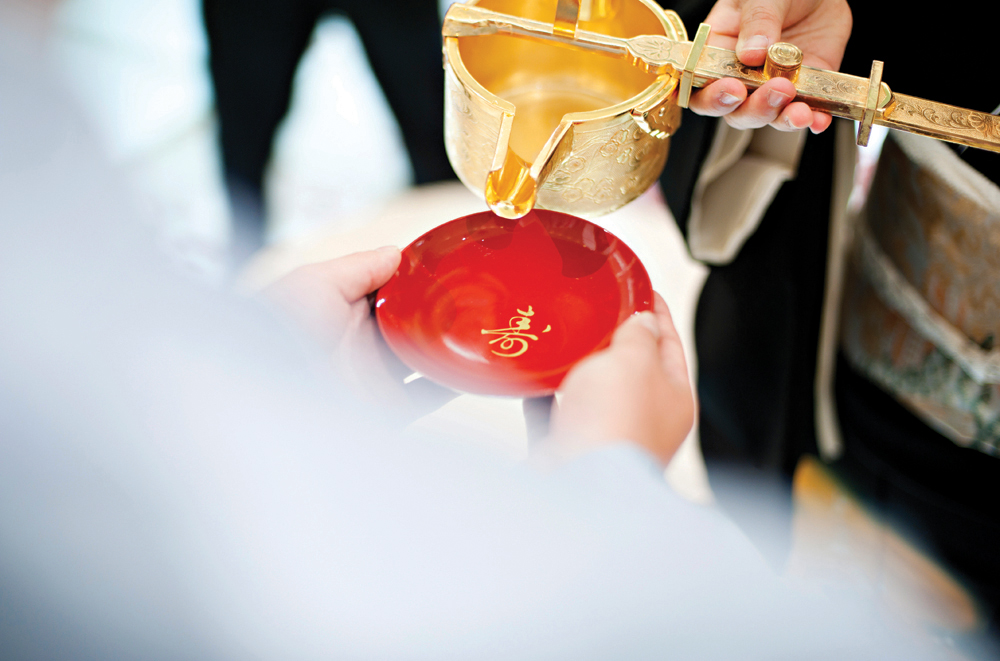 Sankon-no-gi. Sake being poured into one of the three different-sized cups that the bride and groom will each drink from.

Sushi and The Reception Feast

The reception starts with friends and colleagues making speeches honoring the bride and groom. A banquet of French, Chinese, or Japanese cuisine might be served. 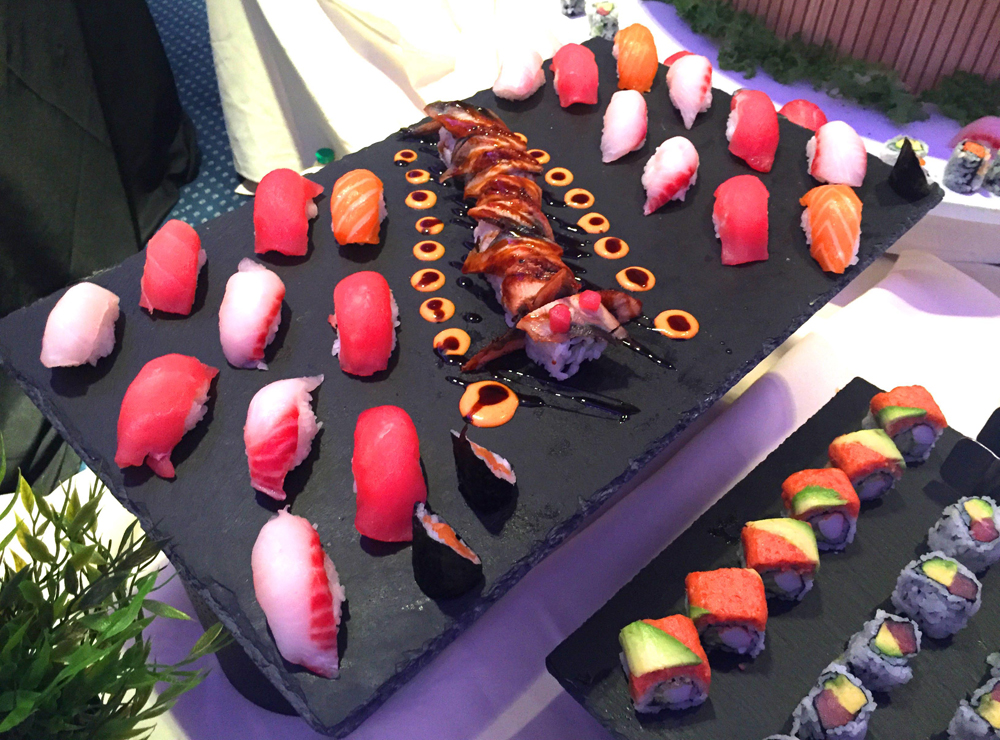 Many Japanese wedding menus, or Japanese-inspired weddings, or, today in America, almost every wedding, includes a colorful sushi presentation.

Japanese weddings also often serve foods like sea bream, shrimp, and red rice for good luck. In some cases, they also use gold dust for decoration. During the reception there is a kagami-biraki or “opening the lid” ceremony, where the lid of a sake barrel is broken open with a wooden mallet and the sake is served to everyone. Because of its round shape, the lid is a symbol of harmony.

During the reception the married couple sits on a stage and enjoys speeches and performances from the guests. The bride and groom typically give speeches thanking their parents while also giving them small gifts.

The reception includes oironaoshi, the bride’s frequent change of outfits, from kimonos to dresses. Some brides change three or four times!

Thid tradition of changing clothes several times dates from the 14th century and symbolizes the bride’s readiness to return to everyday life. At a Shinto reception, the bride will get married in a long white kimono. Then she may come to the reception in a colorful, embroidered kimono, then change into a Western-style white wedding dress, and then into an evening gown or a party dress.

If she has a Western-style wedding, she might arrive in a wedding dress, then change into a kimono and then into one or more party dresses.

At the end of the reception, the wedding couple also toasts all the guests just before cutting the cake, which is traditionally tall and quite large.