You are at:Home»Insights»Oleg Cassini | Designer Interview 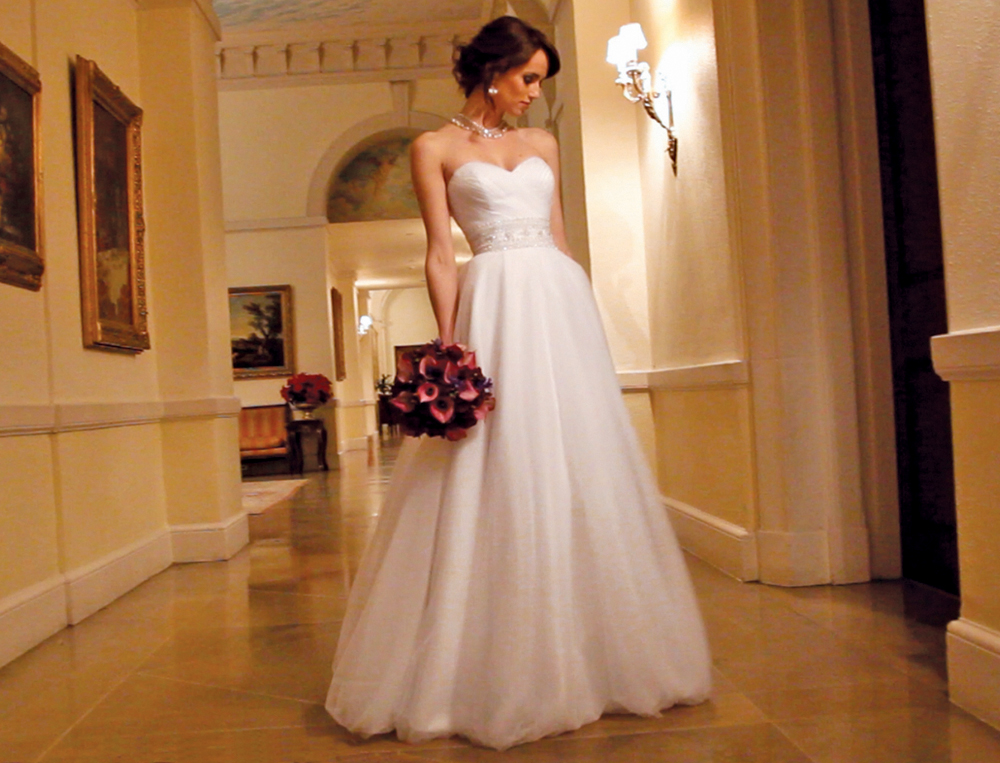 Trust Your Instincts. “I submit that every single woman knows her weaknesses and her strengths. Select a gown that best flatters your figure."

Be Inspired. “Modesty aside, ‘The Jackie Look’ is history. Many of the wedding gowns I design now have their basic inspiration in Jackie. The gowns have a subtle sex appeal, a simplicity, and an audacity if you wish, in the selection of fabrics and various styling elements.”

Only a few exceptionally elegant women have influenced fashion and style in a truly enormous way. Their impact is still felt today, decades after they first achieved fame and prominence. They include such legendary figures as Grace Kelly, Jackie Kennedy, Gene Tierney, and Marilyn Monroe. Many designers continue to acknowledge them as inspirations for their lines.

As a famed Hollywood fashion designer, and then as First Lady Jacqueline Kennedy’s personal couturier, the legendary Oleg Cassini personally designed gowns for each of these style icons, and many more, and his new wedding gowns — in lines priced from several hundred dollars to $50,000 — are huge best sellers.

“I have dressed the most significant women of the 20th and 21st centuries,” says Cassini, “but designing a wedding dress is perhaps the most special task.” 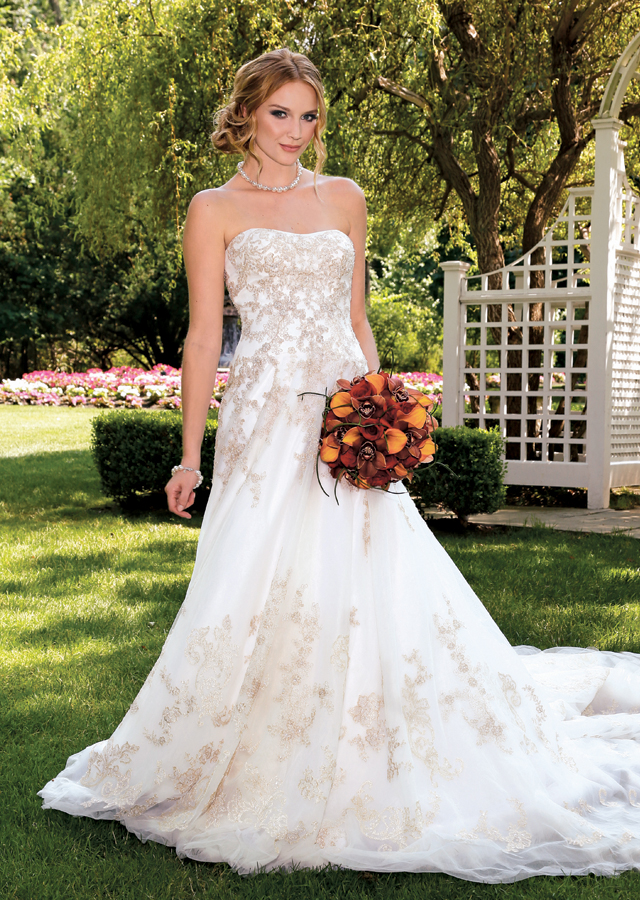 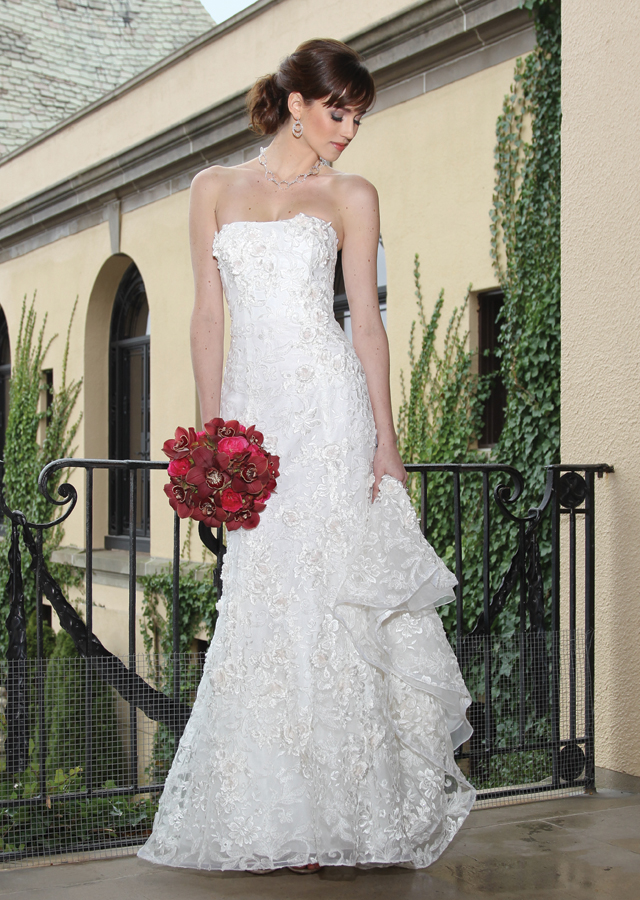 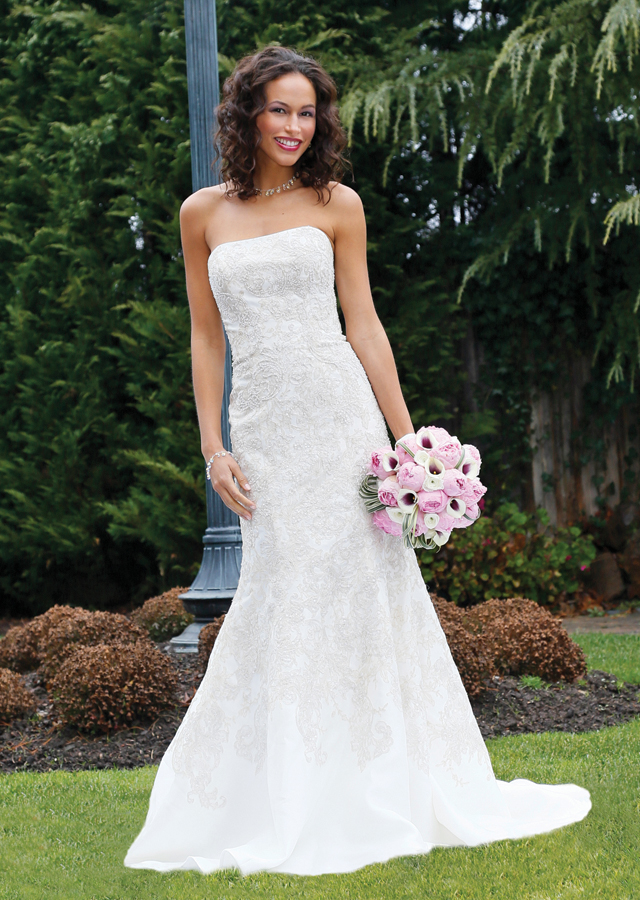 The Poetry of Your Wedding Gown

“In designing a wedding gown, you intervene in a moment, the most important moment, in the life of a young lady.

“When she becomes a bride she enters into what is hopefully a brilliant future. This is certainly one of the most glamorous moments in her life, where everything is done to please her, and she has selected something that makes her look radiant.”

His expansive experience, poetic interpretation of the wedding day, and wide range of both gown styles and price points has made Cassini perhaps the nation's number one wedding dress designer, with some 50,000 gowns sold each year.

In selecting a gown to best flatter your body, he suggests looking for important designers who can contribute to a new look that will excite you on a personal basis.  “You have to have a preference for one designer or another,” he explains. “Or you must fall in love with a dress you see, because there are many competitors in this arena.

“I am lucky to be working with a terrific outfit, David’s Bridal. We believe I am already number one in gown sales, without counting foreign sales, and we are located in 200 stores. It’s wonderful to deal with a great organization and a top executive who knows where he wants to go. In fact, the president of the company now envisions worldwide distribution and sales.”

To select a gown that best expresses your personality, Cassini says, “First of all, you have to know yourself." 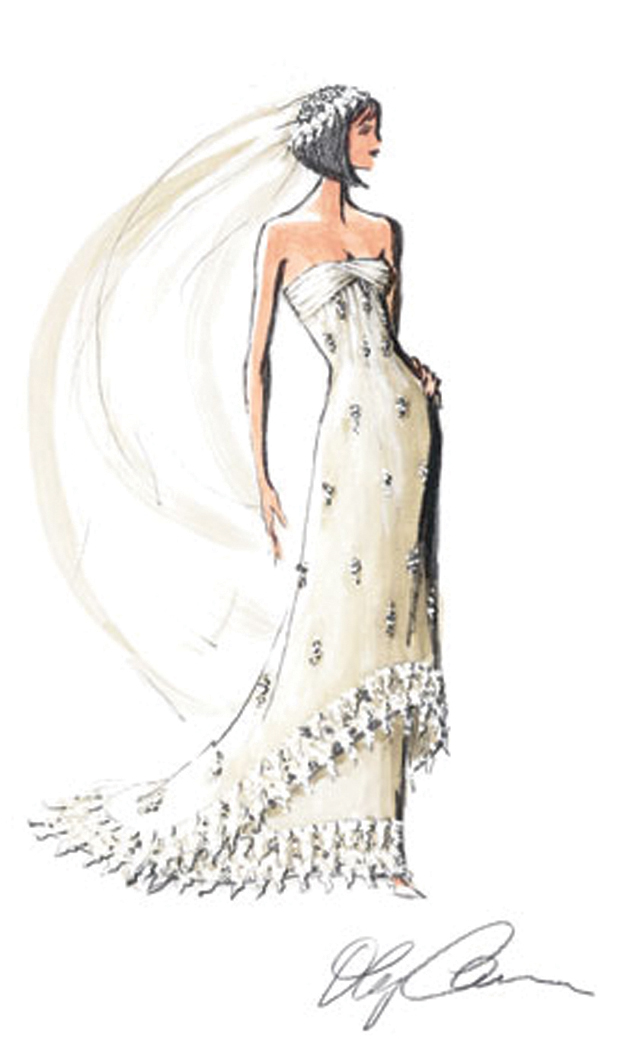 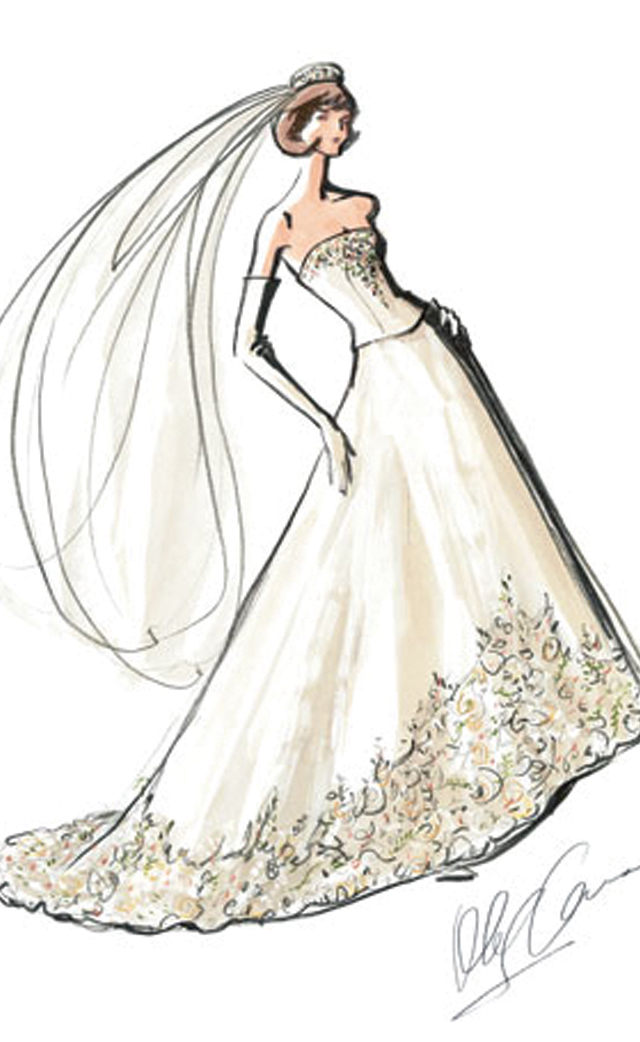 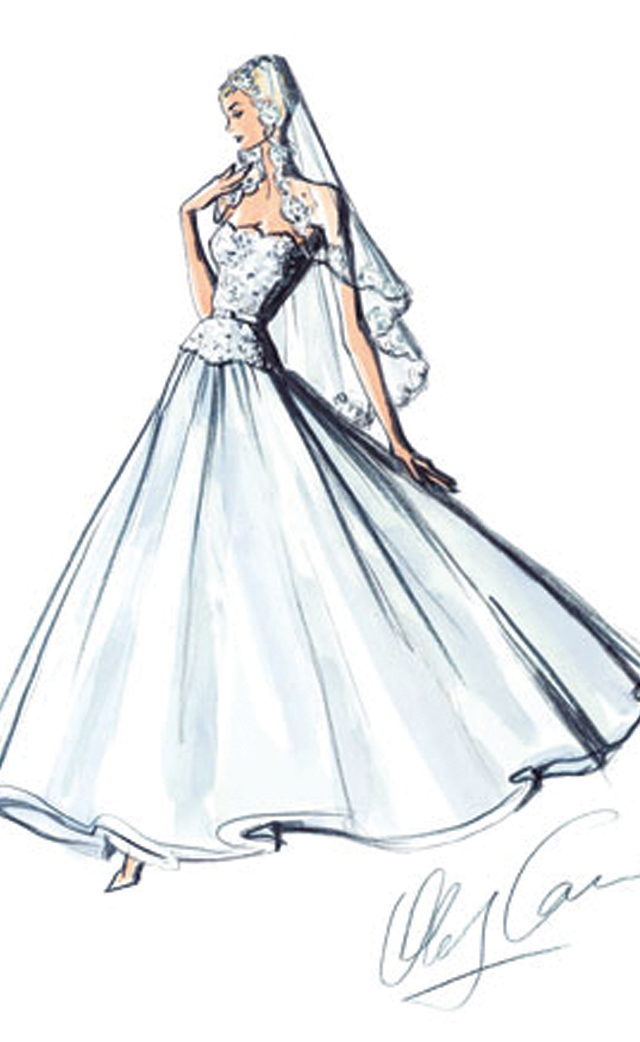 “I submit that every single woman knows her weaknesses and her strengths. Select a gown that best flatters your figure.

“There is something virginal about white, it’s a ritual from ancient times, and then there is some sex appeal. Every body type can find innumerable choices where you will be flattered by your selection. As a bride, you must realize that you are the central part, and all the other things are add-ons. They will be designed around you. You are the central attraction of the day.”

Cassini got into fashion design when he was a student at the University of Rome. “I wanted to be a painter. After about a year and a half I had an interview with Giorgio de Chirico, a great painter, and he said, ‘You have talent, but to be a painter you have to dedicate yourself to it totally, and you want to do too many things. So why don’t you select a career where you need talent, but you also can control your lifestyle?’ And I chose to become a designer.”

Cassini opened a studio in Rome and began designing for the girls of high society, who were his friends. “I was taking them out, and from that beginning in 1933 to the present day, I have had the great luck of designing for some exceptional women. And I have learned that a good designer can become a very important part of a woman’s life.

“Jackie Kennedy, Grace Kelly, and Gene Tierney were extraordinary woman who all made a mark in their lives. I was very fortunate to have the good luck of doing work for them.   “But a good designer who is given that opportunity, like I had with Jackie, has to trust in just the designing for years.

“The same thing happens in selecting a wedding gown. If a bride came to me and said, ‘Can you make me look fabulous?’ I think I could make her look terrific by helping with the gown selection, or offer other suggestions about how to comb her hair and how to tie everything together to present a final picture that will be appealing to her.”

First Lady Jackie Kennedy, for example, truly was the center of attention in many different countries she visited. President Kennedy once said, “I am the man who accompanied Jackie Kennedy to Europe,” and to meet the world’s curiosity about her style, Cassini created fashions which reverberate to this day." 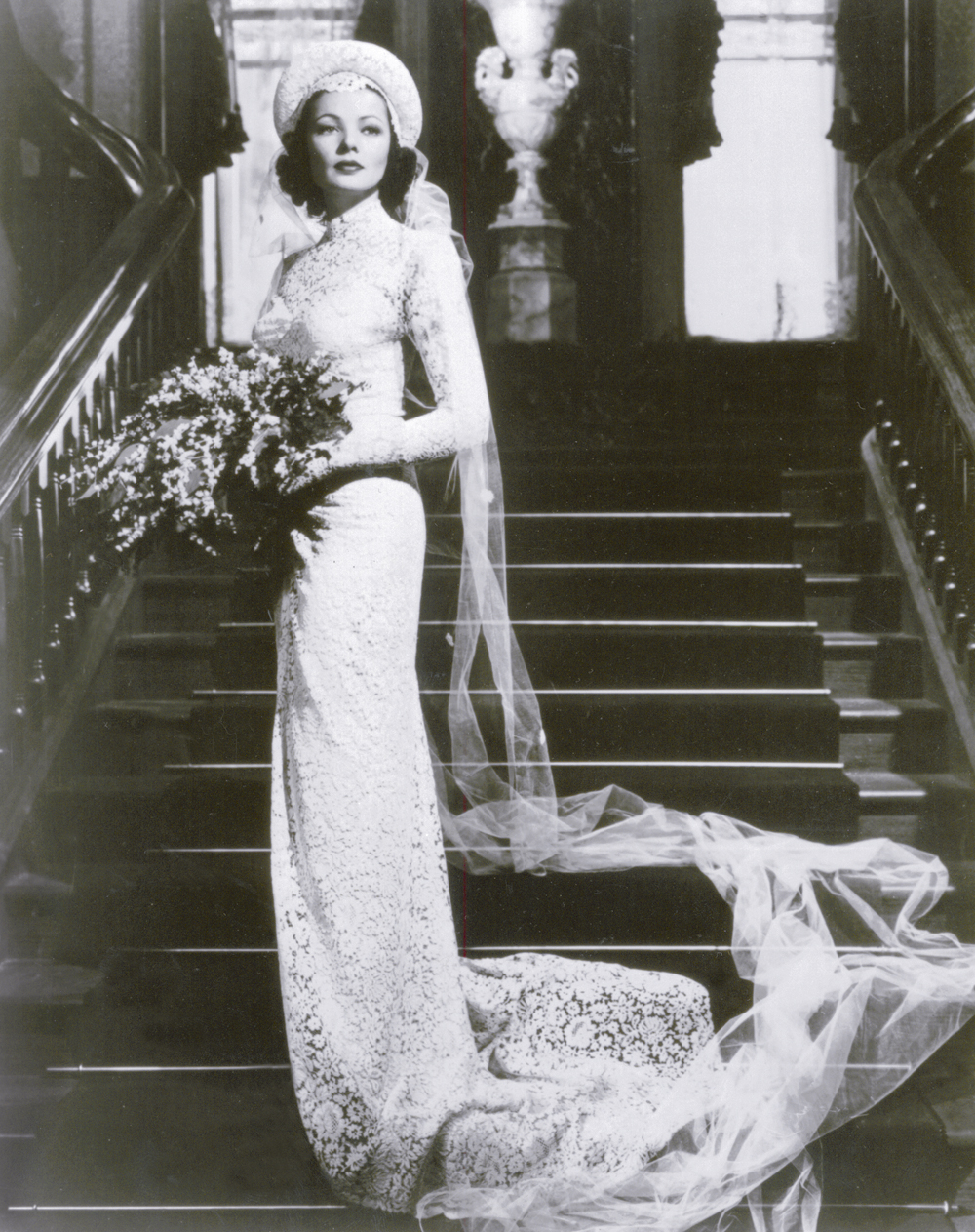 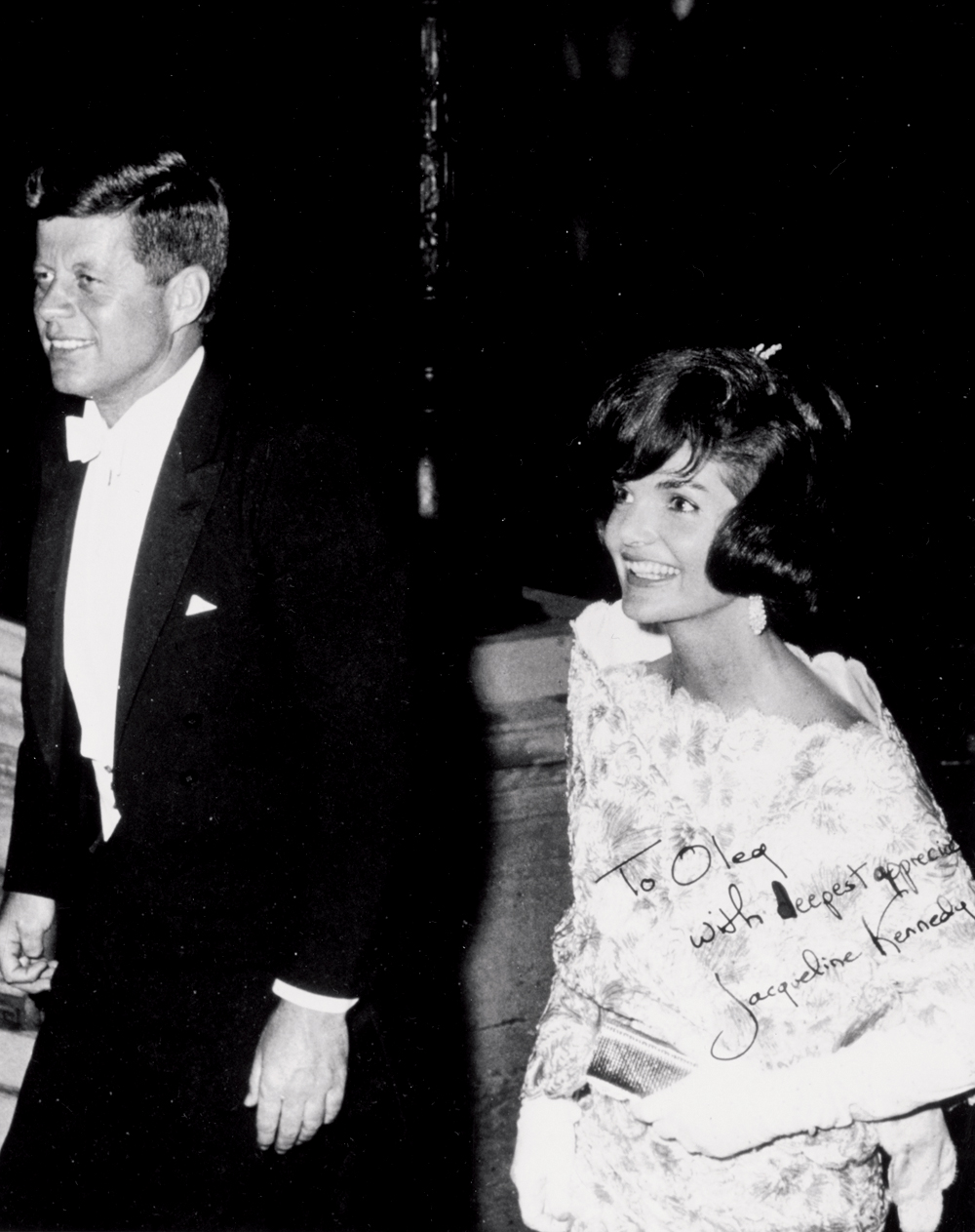 "When I look at Jack & Jackie in their presentation gowns and tux," says Cassini of the photo at right above, for example, "it just reminds me of a bride and groom. They certainly spelled magic."

“It’s decades later and there is still a lot of Jackie in every wedding gown. It is admitted that she was one of the best dressed women of the period, and she will remain an icon for anyone who knows anything about fashion. I was extremely lucky she selected me. It was the telephone call of all time for a designer. She had everything, youth, power, beauty, money, and whatever else a person could have. And she allowed me to express myself and do the best work I knew how to do for her.”

Almost every one of her gowns made a tremendous statement. “Modesty aside, ‘The Jackie Look’ is history,” says Cassini. “Many of the wedding gowns I design now have their basic inspiration in Jackie. The gowns have a subtle sex appeal, a simplicity, and an audacity if you wish, in the selection of fabrics and various styling elements.”

Grace Kelly, on the other hand, is considered by many to be the reigning princess of elegance. “But when I first met her, although she was a good actress, she ‘camouflaged’ herself. She wore glasses and combed her hair in a way that did not respond to her glamour. She looked like a school teacher.

“After much persuasion, I convinced her that she was so pretty that she had to glamorize her style and her lifestyle and wear beautiful things. If you can remember, there was a picture ‘To Catch a Thief’ which suddenly caught up with everybody, and they discovered Grace Kelly.

“But you see, the problem in our society is that only the personalities who had big coverage are remembered. I worked for a tremendous number of stars and starlets, some did well, and some became truly famous, like Marilyn Monroe.

“I worked with Marilyn as a starlet and later on she became a star. So I had a lot of importance for her. Being a starlet at 20th Century Fox she needed direction and guidance, and I was one of those who were there for her.”

Any final advice for a bride looking for her dress and preparing for her wedding?

“I would say, ‘You have to be patient.’ Look and select carefully among the many choices. You have to know your own figure, and what is more becoming on you. And consider designers like me, who have a vast collection. I go from a price of $500 to $1500 in one collection. Then from $5000 to $50,000 in another. If you can’t find your gown in that range, then I did the best I could!

“Now we are ready to embrace brides in other countries, because the line has been so successful in a very short time — we are going worldwide with our gowns.”