You are at:Home»Insights»Traditions | The Russian Wedding 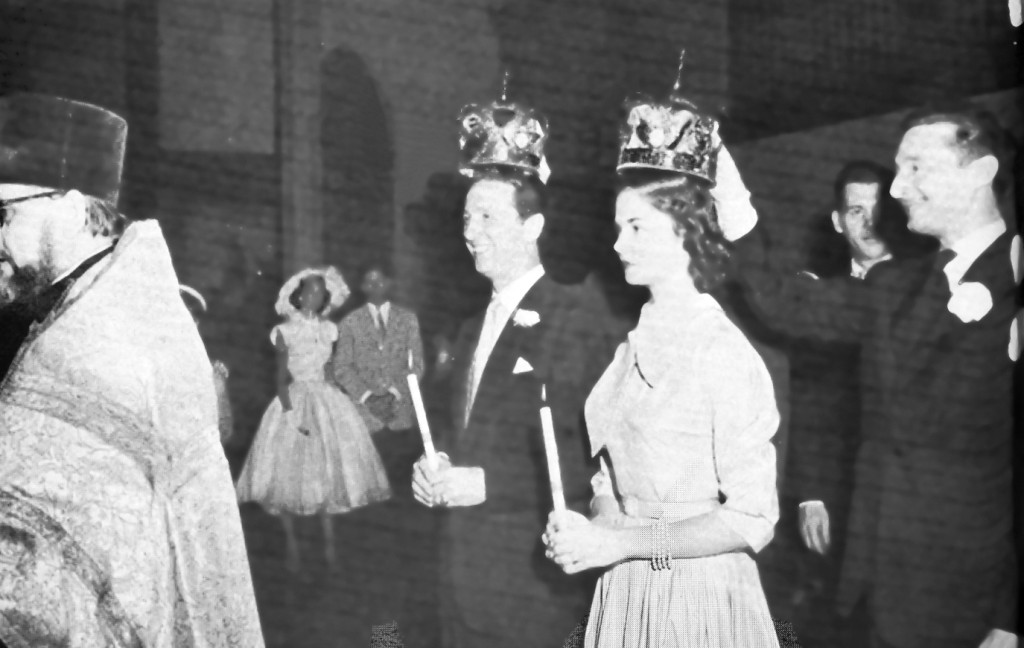 Igor Cassini (society columnist Cholly Knickerbocker) and Charlene Wrightsman taking vows in the Russian tradition and being “crowned.” Oleg Cassini is holding one of the crowns. Press photo.

“Russian weddings have long and rich traditions,” says legendary fashion designer Oleg Cassini, whose grandfather Arthur was the Russian Ambassador to the US. “The traditions stretch from the East Slavic tribes known as ‘Kievan Rus’ of the 10th century to the Russian Republic of the USSR and on to present-day Russia.”

Russian wedding receptions are full of exuberant rituals. For example, before the wedding, a Russian groom has to pay a “ransom” to free his “kidnapped” bride when he arrives at her parents’ home. Her friends and family have hidden her in some far corner, and have placed various “obstacles” in his way.

The traditional ransom would be a bottle of champagne, a box of chocolates, and some cash.

As he leaves for the ceremony with his “newly freed” bride, her parents and friends throw seeds of grain, candies, and coins for happiness and prosperity. After the ceremony, the bridal couple make their way to the reception, first stopping at various local memorials to place flowers in tribute.

In some regional traditions, the wedding celebration is led by a designated master of ceremonies, a “Tamada.” This boisterous friend runs the various wedding competitions. To welcome the bridal couple, he sets up a greeting line with the parents at the end, where they present the new couple with bread and salt and offer their blessings.

“The first item on the actual reception agenda is a toast for the new couple,” says Cassini. The Tamada will announce the first toast: “Za-Molodykh! For the newlyweds!” After the first sip someone says “Gor’ko,” protesting that the wine is bitter.

“Then all the guests shout ‘Gor’ko!’ To sweeten the wine, the newlyweds must stand up and kiss each other — for as long as possible! While they’re kissing the guests count ‘1-2-3-4...’

“But if the newlyweds don’t kiss long enough, the guests can shout that the wine is still bitter! They demand another kiss, and keep doing it until they’re happy with the wine, and with the kiss!”

More toasts follow, for the parents, the Tamada, and others. Toast after toast is interspersed with food and wine. “The Tamada continues running the wedding, reading jokes and poems to the guests and to the bride and groom.”

He also directs the competitions, possibly including such traditional games as “find your bride,” where the blindfolded groom proceeds down a line of the bride and her friends, touching a hand here, a leg there, whatever is extended as he is led down the line. Can he guess which one is his bride?

Gifts are given to the bride and groom throughout the wedding and lotteries are often arranged so the new couple can win money. “After the toasts and the gifts, the new couple begins the dancing,” says Cassini. 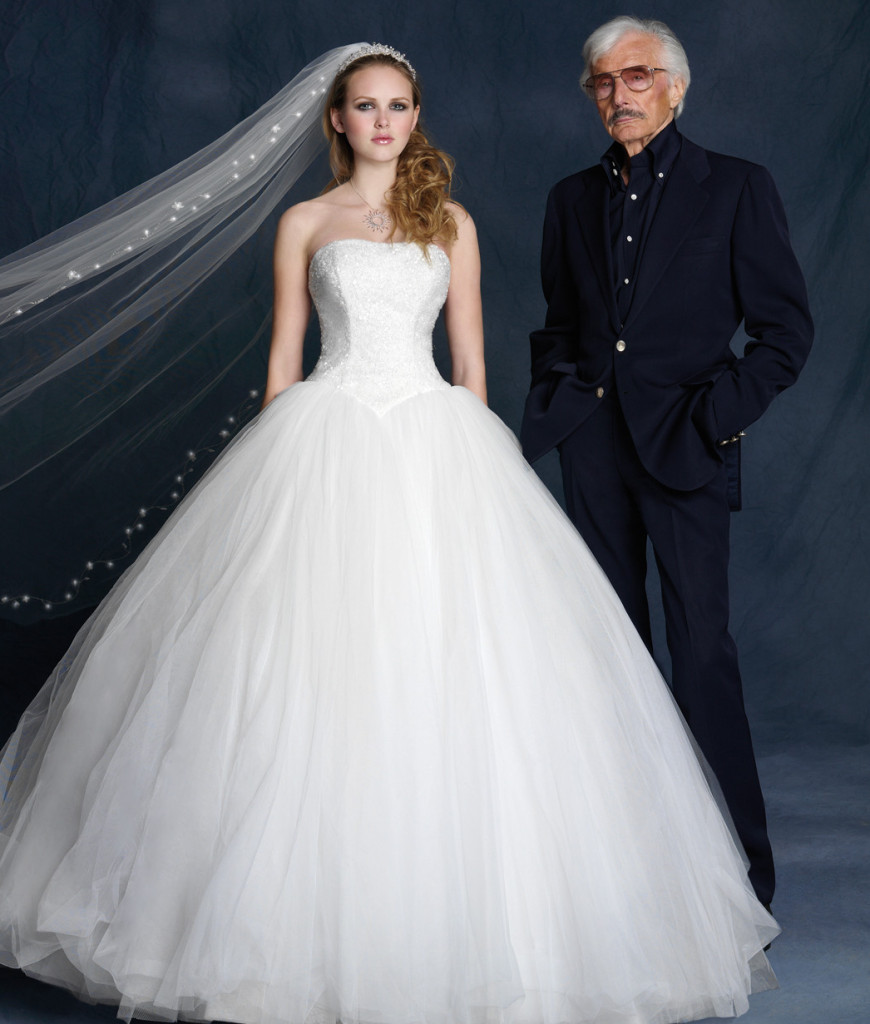 Cassini with one of his gowns and veils inspired by Russian traditions. Press photo. 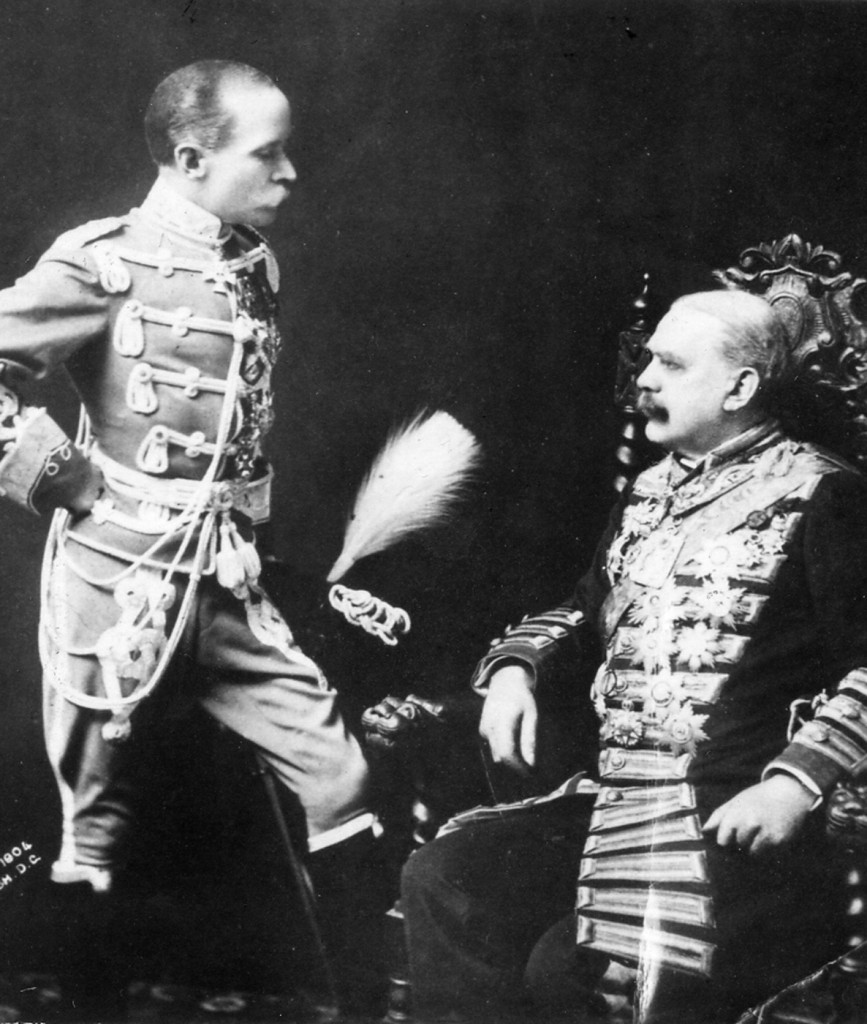 One unique Russian Orthodox tradition is the “crowning of the couple.”

“The crowns are symbols of the glory and honor God bestows on the couple during their marriage,” says Cassini. “The ritual acknowledges them as king and queen of their domain — their home — which they are expected to rule with wisdom and integrity.”

In the Cossack wedding ceremonies of Eastern Russia, the best man and chief groomsman hold heavy ornamental crowns a few inches above the heads of the bride and groom for several minutes.

“Finally, the priest gives the signal for the crowns to be placed onto the heads of the couple,” says Cassini, who can be seen in one of the opening photos holding the crown above his new sister-in-law’s head. “I remember holding the crown over her head for what seemed like hours!” he says.

“The crowns also represent the self-sacrifice asked of the bride and groom, and the crowning is the emotional climax of the wedding service.”

There are many other rituals during the Russian wedding service. “In the hope and wish that their joys will be doubled and their sorrows halved — because they will be shared — during the ceremony the bride and groom also drink wine from the ‘common cup,’ toasting to a better life.”

At the end of the ceremony the priest holds icons of their patron saints above the heads of the bride and groom. Then he places a garland on their heads, and the women in the wedding party step forward and sprinkle seeds on the couple to ensure prosperity and conclude the ceremony.

The bride’s dress is usually made from white fabric, the color of joy and the symbol of purity and chastity. Brides may wear a veil, a crown of gold, or pieces of fabric, satin, or taffeta in their hair. Silver, barley, and oats are strewn on the heads of the bride and groom at the wedding eve feast. In Georgian weddings a veil and a garland of flowers are draped over the couples’ heads.

“The bridal veil is an important wedding accessory,” Cassini tells us. “In early days the veil was a simple thick shawl that closed the face tightly. It was forbidden to see the bride. The violation was considered bad luck that would lead to various misfortunes.”

The newlyweds touched each other only through the veil and did not eat or drink anything during the wedding. “The bridal veil also served for protection from evil spirits,” says Cassini. “Sad wedding songs were also sung, because the bride was leaving her family home.” 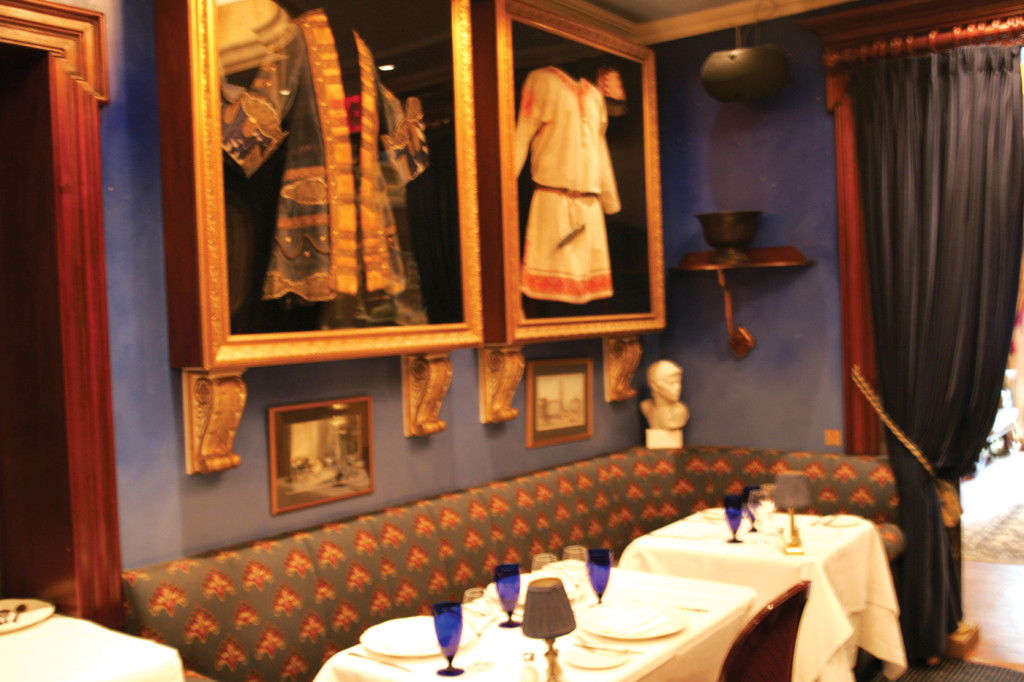 Elegant Russian opulence is on display at the Russian Firebird restaurant in midtown Manhattan. 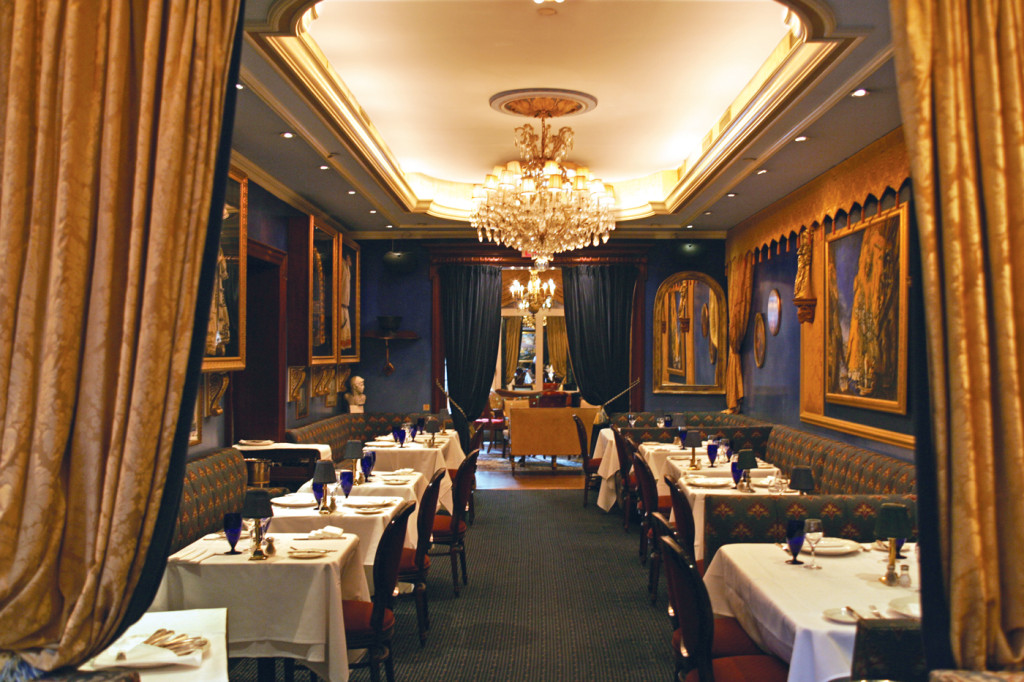 Elegant Russian opulence is on display at the Russian Firebird restaurant in midtown Manhattan.

On the wedding day, the bride would be surrounded by her bridesmaids, who accompany her to the church. “They were to serve as a distraction for any evil spirits,” says Cassini, “so they wore dresses similar to the bridal gown.”

Just as in America, at the end of the Russian wedding reception the bride turns away from her guests and throws the wedding bouquet to the young women who try to catch it, because it means they will get married soon.

In some regions, the couple might stomp on a plate when they first enter their new home. The story goes that  whoever breaks the plate first will have the upper hand in the marriage. (You can imagine the stomping that goes on!)

But the number of broken pieces equals the troubles they will face (so don’t stomp too much!), and instead of catching the bouquet, anyone wishing to marry soon would place a piece of the plate under their pillow.

In many regions of Russia, weddings are two days long. Traditionally, the bridesmaids dress in colorful costumes on the second day and the festivities move along with help from everyone, not just from the Tamada.

After the toasts and the meal on this second day, the bride must “clean” the floor in the room. “The guests are allowed to make a mess while she is ‘cleaning’ — but the mess is made of money! They throw it on the floor for her to clean up!”

A Joining of Souls, Sealed with a Kiss

In old times there was a legend that during the kiss, the souls of two loving people were brought together.

“And the ancestors, appreciating the spirituality and the chastity of young people, considered the wedding day kiss — made in public — as an act which created a life-long bond between the bride and groom.”

In The Soviet Era

For most of the 20th century, Russian weddings were shorn of their traditions, because for some 70 years the land was controlled by the Communists, who forbid religion.

“Russian people are known to be very religious, since their religion is Russian Orthodox. But the level at which they practice has varied greatly, due to the years of Communism our country endured,” says Valentina Kozlova.

Born in Moscow, Valentina was selected first among 30,000 applicants to train at the Bolshoi Ballet School, where she was promoted to principal dancer in 1975, entering the very highest ranks of Soviet society. While on tour in Los Angeles in 1979, she defected and went on to star on Broadway in the revival of “On Your Toes” and then to dance with New York City Ballet as a principal dancer. She also appeared as a guest artist in companies around the world.

“While the Soviet Regime was in power, religion was forbidden, which is why so many people from my generation do not practice as much,” says Valentina. “The only religion which I encountered growing up was when my classmates and I snuck over to a church located near our school.”  Someone from the school saw them and they were reported.

“My mother was called in and was told we would be expelled if we continued to behave that way. Religion was forbidden.” Those who lived in a small village may have been able to include some religious traditions in their wedding, but in general, for Valentina’s generation, couples had a civil ceremony. “During dinner the bride and groom would get up several times and kiss each other  and people also would throw glasses on the floor. But the rest was very similar to other non-religious weddings.”

During the Soviet years, brides would seldom have bridesmaids. “But we would have a band or recorded music, and people would make toasts.”

As a leading member of the famed Bolshoi Ballet, Valentina had a lavish wedding in a big hotel, “but there was still no religious tradition.”

She wore a wedding gown made by her mother. “I also wore a little crown and a veil, which I got in the Czech Republic.”

For their reception, they had three traditional dishes — of meat, chicken, and fish — and guests could choose the one they wanted.

“A popular dish when I got married was chicken tabaka, as well as dishes like meat loaf, caviar, dumplings, and herring. Anything on a menu at a Russian restaurant would be in a wedding. Vodka also is special and so is champagne.”

Flowers, photographers, and videographers were just as popular in Russia as in the United States, even then.

“When I got married in Russia, we were living under the Soviet Regime. Now things have changed. People dress differently. They can practice religion, they have various holidays, and now there are religious weddings.”

Due to Glasnost, Ms. Kozlova was afforded a triumphant return to Moscow at the Kremlin Palace in 1991. Today Valentina has an acclaimed school here in the city, where she offers ballet classes. “Throughout the year, I also hold productions in which my students perform.”

In the Tri-State Area

“In a Russian wedding,” say our catering managers, “the entire family marches down the aisle escorting the bride, who first walks in with her parents. The groom is escorted halfway down by his parents. We also set up an elaborate chuppah.

“The dinner itself features lots of food and great variety. We serve everything: smoked meat, smoked fish, caviar, sushi, sea bass, pickled items, and blinis, plus filet mignon and veal. We conclude with a very elaborate Viennese table. Most of the food is served family style.”

Vodka is often served family style right on the table. “A bottle of vodka, cognac or scotch is on the table, as well as wine. Cranberry and orange juice are also on the table, for the vodka.”

Ask our catering managers what they enjoy most about weddings and they respond enthusiastically. “The smile on everyone’s face on the way home!”