You are at:Home»Insights»Traditions | The Scottish Wedding 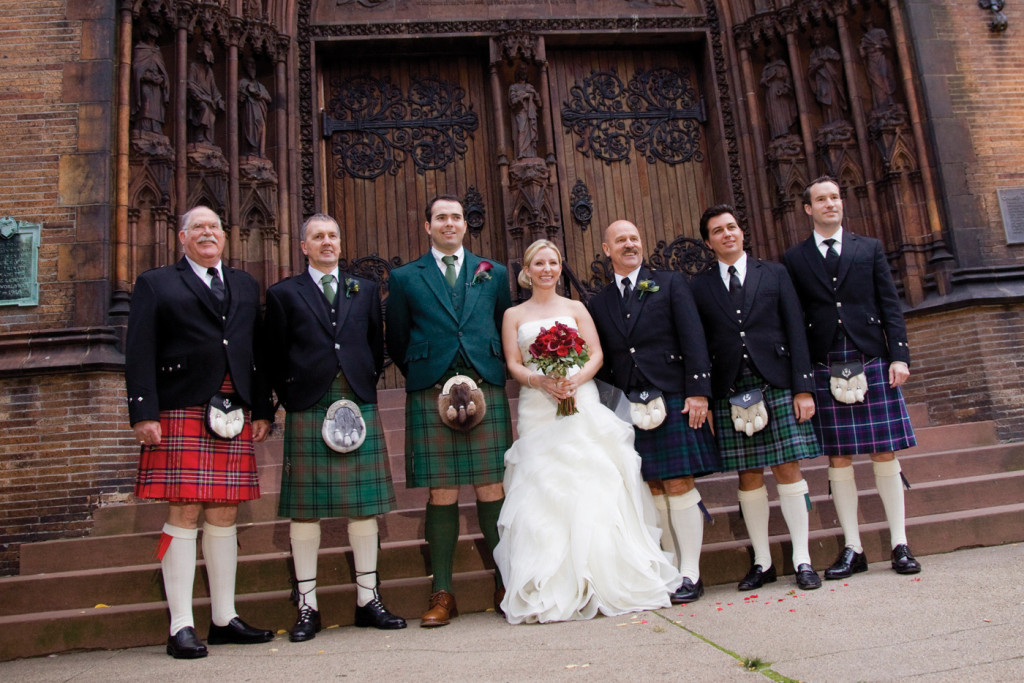 Taryn & Neil, at their wedding in Edinburgh, Scotland, above, in front of the Cathedral of St. Giles just after their ceremony. Photos: Coca Vogel, mother of the bride

“I did the planning for a wedding here in Manhattan between a Scotsman and a true Southern girl from Texas,” one of the area's wedding planners tells us. “They incorporated a number of Scottish wedding traditions."

The Scotsman & The Texan

“For example, a piper welcomed all the guests into and out of the church with traditional Scottish pipe music, and all the men wore kilts.”

If the family is from a traditional Scottish background, the groom’s kilt would be made in the particular tartan, or plaid, pattern that is unique to his family or clan. “Scot’s take this very seriously!” A kilt is accompanied by several items, including a short jacket, a sporran, which is a leather pouch, and the dirk, which is the ceremonial knife of the Scottish Highland regiments. “Our groom obliged with the complete outfit!”

Bouquets may include tartan ribbons or bows. “Our Texan bride went for a more traditional bouquet, but our Scottish groom had a boutonniere with a thistle, the flower of Scotland.

“During the reception, there was much ceilidh (pronounced kay-lee) dancing. It’s a fun group dance for all the guests, with lots of participation.” Many of the steps, like the swing-your-partner moves, resemble square dancing in rural America, while when the guests circle dance, it suggests the traditional circle dance of Israel, the hora.

For the celebratory meal itself, “it’s always possible to serve haggis, the national dish of Scotland.”

Scottish weddings have  bridesmaids and there are toasts, “but they’re more likely to have a ‘toastmaster’ of sorts to keep everyone entertained and lead the party.

“I also really love the tradition where, at the end of the ceremony, the groom pins a small piece of his family tartan to the bride’s gown, to indicate that she is now part of his clan!”

Scottish wedding traditions date back to the 13th century, when the church would announce a wedding for three successive Sundays in a practice called the “banns of marriage.” The tradition lasted over 600 years, but it’s been replaced by a simple announcement of the upcoming wedding and a trip to get the marriage license.

Celtic Scottish wedding practices had roots in pagan rituals. Tying the knot, for example, started with the bride and groom ripping their wedding plaids, their respective clan tartans, and tying the two strips together to symbolically unite the two families.

“Creeling the bridegroom” is another old custom. The groom carried a large basket, a creel, filled with stones. He would walk around the village until his bride would finally come out of her house and kiss him.

Today, some couples follow the old tradition of getting married just outside the church doors, and then enter the church for a nuptial mass.

She’s a New Yorker, He’s a Member of the Bruce Clan

Now living in Scotland, Taryn was from New York and Neil is of the Bruce clan, as in “Robert the Bruce.” They had two weddings, one in Scotland and one in America.

“At the Scotland wedding, Neil wore his kilt and we had a ceilidh dance,” says Taryn. “At the American wedding our groomsmen wore kilts as well.”

Your particular Scottish ancestry will determine the traditions of your ceremony. “There are Celtic, Gaelic, and Norman backgrounds that dictate traditions,” says Taryn. “Neil’s background is Norman and Anglo-Saxon, so we did not incorporate any Celtic traditions.

“Since we’re both dancers, my sister did a great reading about dancers and life at the Scotland wedding.”

The ceremony was mostly Jewish. “We married under a chuppah and broke the glass, the Rabbi read the Seven Blessings, and we did a hora as well as the ceilidh dance!

Neil taught the dance to six people at the rehearsal dinner, which was fun. Then each of those six headed up a row of dancers when we quickly taught it to our guests during the wedding.

“At the Scotland wedding, three of Neil’s close male friends toasted him in a three-part toast at our cupcake and champagne celebration and our ‘best man’ was a woman, the Scandinavian recording artist and songwriter Ellen Xylander, she gave a beautiful toast at dinner.” 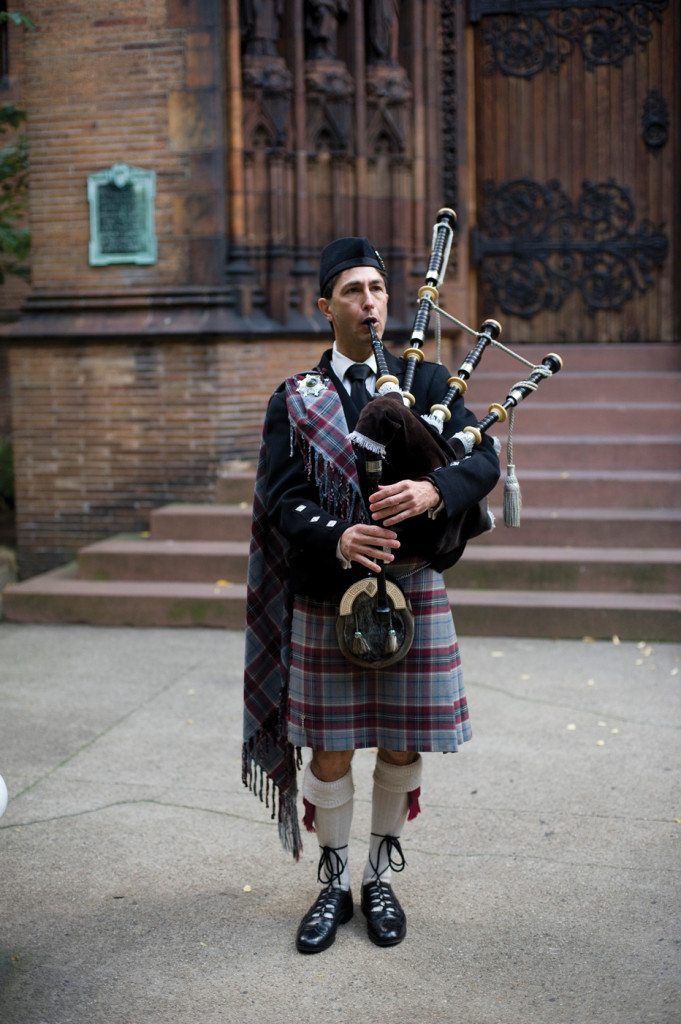 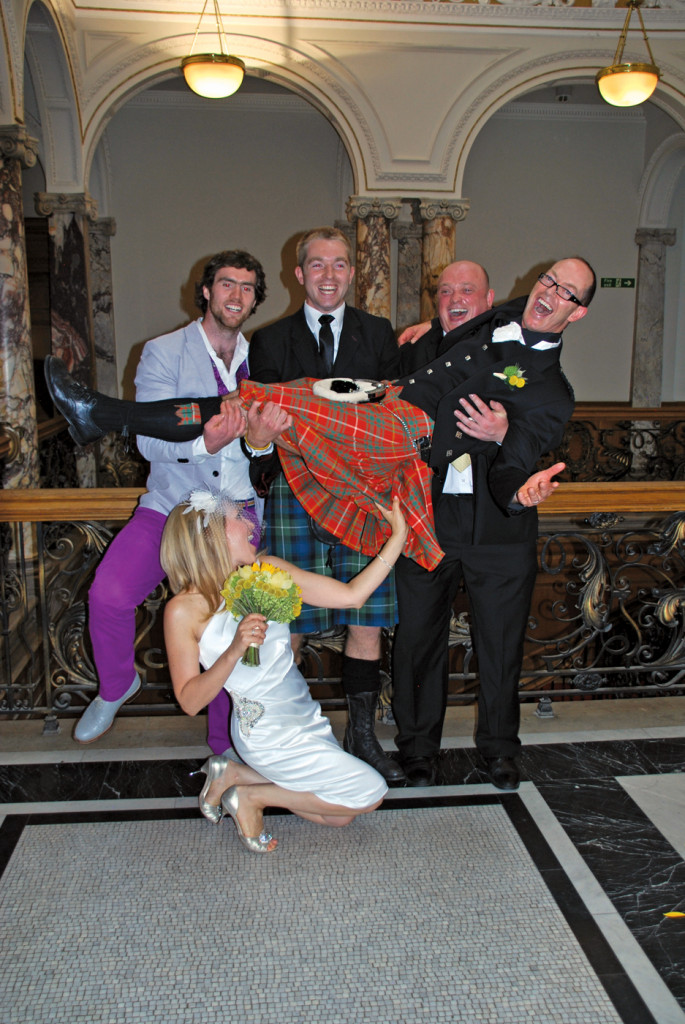 The Manhattan groom’s boutonniere, with a thistle, the flower of Scotland.

Many of today’s traditions reflect those of the past. For example, a typical Scottish ceremony includes “handfasting,” the symbolic act of tying a couple’s hands together to represent their union. It’s usually done with cords or ribbons and is typically the main focus of their wedding day.

In 2004, some handfastings in Scotland became legally recognized as part of the wedding ceremony when the Pagan Federation of Scotland gained authorization to legally perform weddings. These weddings, as you’d expect, typically incorporate a handfasting as the main focus.

Another traditional custom is putting a silver sixpence in the bride’s shoe to represent wealth and financial security. As Oleg Cassini says in his book, “The Wedding Dress” (Rizzoli) “It dates back to the Scottish custom of a groom putting a silver coin under his left foot for good luck. These days, a dime or a copper penny is substituted.”

There are gift-giving traditions in many cultures, and about a week before the ceremony, the mother of the Scottish bride will hold a “show of presents” for her daughter. It’s like our bridal shower, and the bride’s friends bring gifts to help her in her new home. Presents are opened and the bride’s mother serves cakes and tea.

The bridal couple are either bagpiped down the aisle or traditional Gaelic hymns are played. The familiar “Highland Wedding Song,” which you’ve heard many times, is played at almost all Scottish weddings.

After the ceremony, everyone goes to a lavish reception feast, where the bride cuts the first slice of wedding cake. Then they join in their first dance, which often begins with the bride and groom marching to the sound of bagpipes.

Soon the maid of honor and best man join in, followed by both sets of parents and finally by all willing guests.

One custom that hasn’t changed for more than 700 years is the custom of the groom carrying his new bride over the threshold of their new home they will share together.

The custom originated to keep evil spirits from entering his wife through her feet and also reflects the Roman belief that it was unlucky if the bride tripped on entering the house for the first time.

Then they would arrange for several members of the bridal party to carry her over the threshold. Now it’s up to the groom.

The Bagpiper & The Rabbi ... The formal nature of the kilt and the solemnity of the ceremony itself can prime both family and friends for a touch of levity. “At one of my weddings,” says Rabbi Marcia Rapport of Creative Interfaith Ministry, “the bride was Scottish and she arranged for a bagpiper, kilt and all, to lead the guests into the cocktail hour, which was a very special idea.

“But the bagpiper must have gotten his signals mixed up, because there I was, just finishing the wine ceremony, and he walked in playing the bagpipes!

“Well, the bride’s face froze. The guests began looking at me, confused, as if to say, ‘What’s going on?’

“I let him continue playing and when he finished I just said, ‘Everyone wants to get into my act!’ That broke any tension, and I know that moment will be part of how they remember their wedding.”

The luckenbooth brooch is a traditional Scottish love token. Usually made of silver, it’s engraved with two hearts intertwined or with a crown above one heart. It may also be engraved or set with stones.

The name comes from the luckenbooths of Edinburgh, where jewelry and trinkets used to be sold, including this type of brooch. Some couples pin this on the blanket of their first-born for good luck.

Some couples exchange either claddagh rings or gold rings with Celtic knotwork designs instead of plain gold wedding bands.

For over 250 years, the St. Andrew’s Society of the State of New York has been true to its purpose, as it was originally stated in its constitution, dating from 1794.

They tell us that a ritual often performed during the wedding ceremony is the exchanging of silver. When exchanging rings the groom gives the priest a piece of silver. The groom is pledging to “provide and protect.”

The father of the bride gives the first toast, and he is followed by the groom, who thanks the bridesmaids and gives flowers to each of the mothers. Then the best man has the final toast.

The vessel for the toasts also has symbolic importance. Called a quaich, the two-handled loving cup symbolizes the sharing between the couple. It’s an ancient vessel used by two families, or clans to celebrate a bond, with each leader partaking of the offered drink.

There will be many Scottish traditions on proud display at the Waldorf=Astoria on April 14, when the St. Andrews Society hosts their Man & Woman of the Year Gala.