You are at:Home»Insights»Your Wedding Vows»Bet Halevi | Include Loved Ones in Your Ceremony

Inclusive Ceremonies. “We try to personalize every aspect of your ceremony, from the initial greetings to traditional readings, from Taoist philosophy to authors such as Leo Buscaglia, Mark Twain, or Kahlil Gibran.”

The Perfect Ceremony: Include Loved Ones

“When I meet with couples I get a sense of them and what is needed, and we go from there,” says Rabbi Mordecai Genn, Ph.D., of Bet Halevi. “We try to personalize every aspect of your ceremony, from the initial greetings to traditional readings, from Taoist philosophy to authors such as Leo Buscaglia, Mark Twain, or Kahlil Gibran.”

Dr. Genn has officiated at Hindu, Hindu-Jewish, Chinese-Jewish, and all types of Christian-Jewish ceremonies. “I’ve had couples individualize their ceremonies by creating their wedding canopy from a grandfather’s prayer shawl, or creating it out of genuine Irish linen and lace, or by using wine cups that were family heirlooms.” 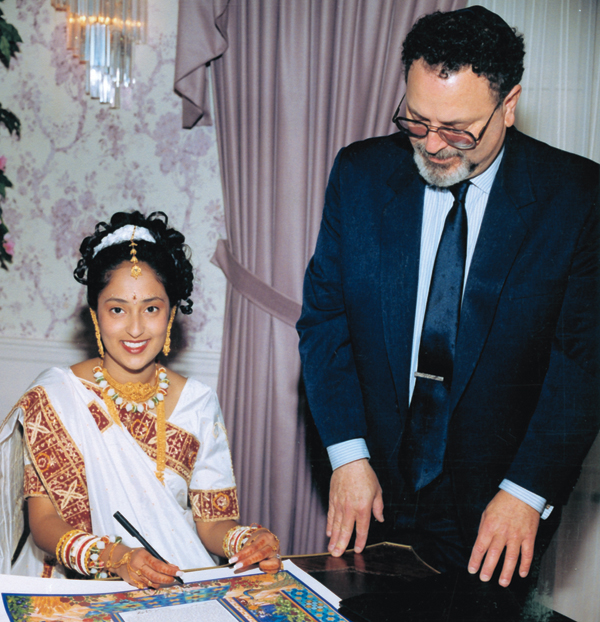 Ceremony readings can be individualized, from traditional to contemporary. “I encourage people to include members of their family in the ceremony as readers and participants. For example, in lighting the unity candle, we can call up the mothers as representatives of each side, who pass the candles to the bride and groom.”

After earning his Ph.D. and getting ordained an orthodox rabbi, Dr. Genn served as a conservative rabbi, then became a reconstructionist. “We see Judaism as an evolving religious civilization that believes what makes you Jewish is what Jews do.

“I see interfaith marriage as ‘good,’ because it helps bridge the differences that separate us and emphasizes the idea that we are all God’s children. Couples who marry outside traditional faith partners are simply those who have fallen in love in a country which lets people meet on an equal footing. I feel that rabbis should help.

“To strengthen their bond, I try to show their commonality. There is a lot to unite us, and I emphasize this throughout the ceremony.”

He also personalizes the ceremony to reflect each couple’s wishes and beliefs. “In the Chinese ceremony, for example, the bride serves tea to the groom’s family to show she is serving them, but in the ceremony we created, it was egalitarian,” says Dr. Genn. “The bride and groom each served tea to both families. So the emphasis was on becoming part of both families, with neither one acting as a servant to to the other’s.”

At another wedding the bride chose to have one of her former Fordham University professors as an officiant. “He was handicapped and in a wheelchair,” says Dr. Genn. “So to keep us all on the same level, rather than having one of us sitting, everyone sat.

“Once the father of a bride was in a hospital suffering from cancer, so we had the ceremony there in his hospital room. I will do whatever is needed to create a meaningful ceremony.”